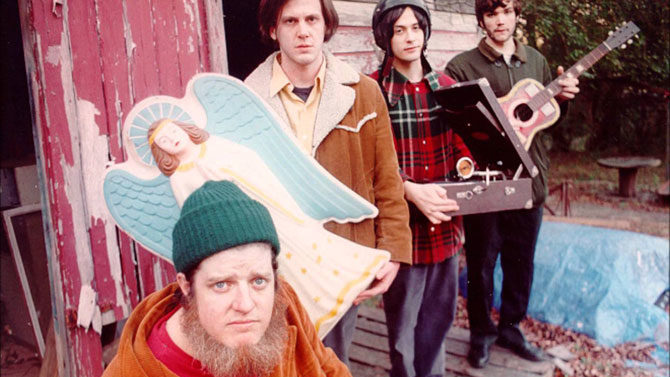 Neutral Milk Hotel is playing again, touring after a long hiatus, traveling the U.S. and Canada and Europe and Australia and Taiwan and pretty much everywhere else. But before it gets all “reunion tour”-y up in here, let’s clarify a point.

“I don’t think you can really call it a reunion, because they never broke up,” says Elf Power frontman Andrew Rieger with a wry smile.”They just took a long break.” His band will open many of the shows on Neutral Milk Hotel’s comeback tour.

Indeed, much of the narrative surrounding the band—the most conspicuous limb of the body that is the Athens-based Elephant 6 music and art collective—has been greatly exaggerated. Despite what you may have heard, NMH centerpiece Jeff Mangum never quit music, never suffered a career-ending nervous breakdown, never grew a crazy mountain-man beard nor retreated to a desolate wooded hermitage to live out his days in blissful solitude.

OK, so maybe he grew a beard. But by most other accounts, Mangum has quietly remained a part of the larger creative community (as well as, to some extent, the local Athens one) over the decade-and-a-half since his band’s undisputed masterpiece, 1998’s In the Aeroplane Over the Sea, was released.

He has popped up in various locations with various E6 projects, including the collective’s Holiday Surprise tour, where at several shows he played Neutral Milk Hotel’s “Engine.” He has experimented with abstract sound collage. He has collected field recordings in Bulgaria. He has paid tribute to ill and fallen friends the way he knows how—through song.

The operative word here is “he.” Aided in no small part by Mangum’s Salingerization, Aeroplane took on such a distinct life of its own in the years following its unveiling that the real, living person behind the record’s plaintive strums and noisy swells, its gloriously fuzzed-out psychedelic folk epics, was lost. Mangum became, in effect, less an artist and more an idea.

To wit, his return to the spotlight has been painstakingly fussed over. In 2011, Mangum played a pair of shows at Trinity-St.Paul’s United Church in Toronto, Ontario. The resulting media hyperventilation nearly reached hurricane force.

That same year, he went on to play the All Tomorrow’s Parties festival in New Jersey and perform a surprise stripped-down set at New York City’s Zuccotti Park during the Occupy Wall Street demonstrations, among other lowish-key appearances.

A Neutral Milk Hotel vinyl box set appeared around then, featuring Aeroplane and its full-length predecessor, On Avery Island (a record Rieger contends is “just as good” as Aeroplane), as well as a pair of 7-inches and two 10-inch EPs. One of those EPs, Ferris Wheel on Fire, consisted of eight previously unreleased acoustic Mangum recordings from 1992–1996. A nationwide solo jaunt followed.

Mangum’s journey back to Neutral Milk Hotel was spurred by the realization that his music still meant something, and to a new generation of listeners, says longtime friend Bryan Poole, also of Elf Power.

“For a period of time, he would say, ‘I feel like maybe I want to play [Neutral Milk Hotel songs].’ But I think he was nervous, because he hadn’t done it in so long. And then a couple years ago, he happened to be somewhere with a group of people and played a song or two. And they were like, ‘That was great! Play some more!’,” Poole laughs. “And they had no idea who he was. And he’s all, ‘Oh, you wanna hear another song?'”

During his solo tour, which included a hometown stop at the 40 Watt, Mangum engaged the crowd in light banter and even welcomed vocal participation from fans. To some, it was an unexpected attitude from a man whose standoffishness was rumored to be legendary. To his friends, it was just Jeff being happy Jeff.

“I think it was a good idea to Jeff to kind of dip his toe back in the water by doing the solo touring for a year or two, which went really well,” says Rieger, who, with Laura Carter and Neutral Milk Hotel’s Scott Spillane, tagged along on that tour as the aptly named trio Andrew, Scott & Laura.

“People really have a deep connection with those songs,” Rieger adds. “It’s cool to see them get to see it live, and it’s nice to see Jeff having so much fun doing it.”

In May of this year, the Neutral Milk Hotel tour was announced. The group responsible for Aeroplane—Mangum, Spillane, Julian Koster and Jeremy Barnes—would play together for the first time since 1998.

Early reports from the full-band tour, which began Oct. 11 in Baltimore, describe Mangum’s voice as sounding heftier, more gravelly than before. According to Rieger, Mangum and crew have been practicing for months, and the band is as tight and yet ramshackle as ever. There is a tangible feeling of chemistry and jubilation. “I really do love all of these people, just so you know,” Mangum was recently quoted as saying from the stage where Neutral Milk Hotel played its first show in 15 years.

Of course, for the E6 crowd, it has always been about mutual respect. Rieger and Poole both recall time spent in the house at 156 Grady Ave., where Mangum wrote much of the material that would end up on Aeroplane, as a magical, mystical experience. Poole describes “an electricity in the air, a feeling that something awesome was happening.”

That electricity, spawned from unquestioning camaraderie, is an important and overlooked part of what makes Neutral Milk Hotel still feel so vital. Amidst the threat of economic collapse, of cynical politics and government shutdowns and digitally assisted cultural fragmentation, the band represents a certain bygone communal ideal. To E6ers, social networking meant late nights spent huddled around tape recorders and stories swapped at Sunday potluck dinners.

Heard in this context, an album like Aeroplane takes on an almost physical quality. It seems appropriate; even in his supposed absence, Mangum’s music has continued to imprint itself upon listener after new listener.

Poole says he always thought of E6 as being “like a school of art that people would look back on from future generations and maybe our little scene would’ve made some sort of mark.