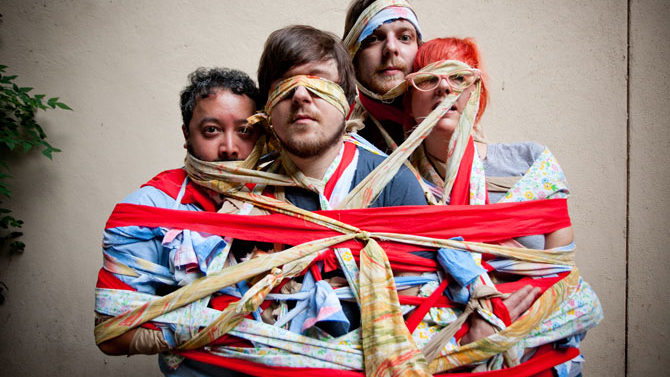 It’s not that TaterZandra is a bad name, per se. (Points for googleability.) It’s just that it doesn’t conjure images of a totally badass rock band so much as some neglected item on an all-you-can-eat cafeteria counter. Still, it kind of makes sense, in a weird way; the intertwined personalities that comprise the local post-punk group are as wide-ranging and unpredictable as the items on a Golden Corral menu.

“If somebody says, ‘This sounds like that,’ we’re like, ‘Fuck that, we’re not doing it,'” says Jon Crandall, the group’s drummer, quick on the skins and with a joke, about where the group falls on the stylistic spectrum. But a music critic’s impulse is to compare, and at the risk of alienating my subjects I tell them that Nom de Plume resembles Sonic Youth as heard through post-hardcore earbuds.

Bandmembers agree, albeit reluctantly—”We all like Sonic Youth,” someone groans (the “of course” is implicit)—but insist, fairly, that the analysis is short-sighted. What about the tonal experimentation that dots the record’s edges, the adept melodicism that shines its coat?

“The contrast is what makes it cool,” says singer and guitarist McKenna Mackie in her inveterate Georgia accent. In an email she labels her band’s sound as “structured minimalistic ambient cacophony,” a ridiculous description that’s actually not far off: Nom de Plume is wide-ranging. The textural interlude “Out to Pasture” is a far cry from the next track, the scuzz-punk “March Hare,” while the menacing “Phalanges” is worlds away from the borderline pop tune “URURME.”

TaterZandra is a collaborative effort; this much is clear. During the writing process, “Everybody gets their say, idea-wise, what we should try,” says guitarist Matt Tamisin, the band’s unofficial spokesman. “And then we have to all agree on what the final thing is. So we end up trying a million and one different things, and something usually ends up making it that we all agree on.”

The group’s music is intricate and considered. Individual influences—Mackie’s classical upbringing (“[My dad and I] would ride around in the car and he would blast it out. Classical music was totally rock and roll to me,” she says); Crandall’s half-serious affinity for “TV soundtracks”—rub against each other and create a friction that births the final product, which sounds like everything and nothing that came before it.

“We don’t want [every] song to have a certain sound,” Mackie continues. “We want it to surprise us, as well.”

Nom de Plume is full of surprises that work surprisingly well. TaterZandra’s ability to blend these disparate sounds into something that sticks owes both to bandmembers’ musical prowess and their readiness to adopt one another’s ideas. When speaking with them as a group, it becomes clear how close they all are.

When Wade Gunter, the group’s quiet, ambling bass player, wanders up late to the interview (“I had to count out some nickels and stuff [for gas], but I made it,” he says), the rest of the band ribs him, but only just enough that he feels it. When the band discusses the ample time spent recording Nom de Plume, Crandall jokes that “Some of us [need] a lot of takes, if you know what I mean,” and mimes towards Mackie, who affects annoyance.

But they know, as does she, that it’s Mackie’s explosive, expressive singing that ties everything together. She is as adept at screaming bloody murder (“Wanjiku”) as she is at providing a song’s lead melody (“URURME”) and spooky, sirenlike cooing (the opening of “Bahrain,” which recalls both Kim Gordon circa Sonic Nurse and Deerhoof’s Satomi Matsuzaki). She is a vocal shapeshifter, the band’s greatest weapon.

“I’m kind of shy and introverted,” Mackie says. “I can’t ever get across what I wanna say, you know? So you get to express yourself and be yourself wholly through the music.”

In its early live shows and on its first demo recordings, the group floundered a bit, veering woozily from song to song with little continuity, but Nom de Plume proves that TaterZandra is becoming itself, wholly. In Athens, where it’s not uncommon for a new and talented band to implode well before figuring itself out, this is a welcome sign.

Still, though the group is becoming itself, it isn’t losing any of the chameleonic qualities that make it so uniquely suited to share bills with any number of locals, from the brash punk of Muuy Biien to the weirdo-pop of Tunabunny—both of whom the band cites as favorites. (“They’re inspiring,” says Tamisin of his peers. “It’s totally different than what you do, and you don’t wanna do what they do, but it makes you wanna play. It makes you wanna do something cool.”)

And it isn’t ditching the name, either. About that: Mackie finally explains that the band’s strange moniker stems from a family tale about her younger sister, whom she describes as “one of the most inspiring people I’ve ever met… Her name’s Taylor Alexandra, and when she was really little, starting to talk, we’d be like, ‘Alex’—she goes by Alex—’What’s your name?'” The sweetly mangled response, as those things go, became a mantra.

“Actually,” Tamisin says, having memorized the story by now, too, “she said two ‘Zandras’.”

“We shortened it,” says Gunter, “because at every show there were these drunk people, and they’d ask the name. We said ‘TaterZandraZandra,’ and they were like, ‘What?'”

“They still do the same thing,” Crandall notes, “but instead of it taking five times to register, now it takes maybe two.”

Tamisin grins and measures a length with his hands. “Plus, the sticker would be that long.”