Yo La Tengo Resists the Flow 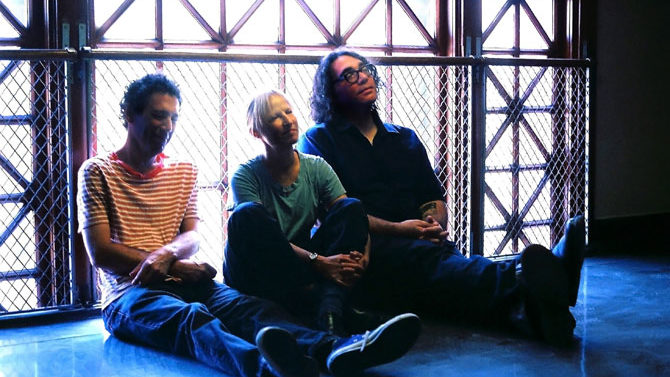 “Ohm,” the first track on the 13th full-length from Hoboken, NJ indie rock heroes Yo La Tengo, opens with the following lyric: “Sometimes the bad guys come out on top/ Sometimes the good guys lose/ We try not to lose our hearts/ Not to lose our minds.”

The album, Fade, is another impressive mile marker for the nearly 30-year-old band, which gets more exciting as it mellows out; its three members are easing into musical middle age with quiet confidence, an arresting calmness that makes you wonder what kind of secrets they’re not sharing.

The band’s longevity owes to its deliberateness, says Jesse Jarnow, the New York City-based writer and musician whose recent book Big Day Coming: Yo La Tengo and the Rise of Indie Rock chronicled the group’s history from its 1984 beginning as the husband-and-wife duo of Ira Kaplan and Georgia Hubley.

“It helped that they existed inside a very rich music scene,” says Jarnow, “but they did things at their own pace, which has a lot to do with what they’re trying to get out of the experience of being in a band. Not many bands are patient enough to wait six years to find their third member.”

“I don’t think about it, really,” he says, in response to Jarnow’s theory. “I think there’s certainly truth to that. It just instilled a way of working in us—we made music for ourselves, and for each other, before anyone else. I think it’s just kinda who we are. We didn’t set out to be a traditional success—’Let’s start a rock band and get rich and famous.’ It was more, ‘Let’s be in a band because we can, and this is what we wanted to do since we were little kids.'”

Yo La Tengo has always done its own thing. Whether soundtracking underwater nature documentaries (The Sounds of the Sounds of Science) or releasing an album of half-baked, fan-requested cover songs (Yo La Tengo is Murdering the Classics), the band approaches its work with a tenderness that permits its more esoteric tendencies. (Two recent examples: a concert where the band table-read an entire “Seinfeld” script onstage; the music video for “I’ll Be Around,” which segues from footage of a lip-syncing Mac McCaughan to Yo La Tengo cooking tortilla soup together, complete with recipe overlaid on-screen.)

Yo La Tengo is dichotomy. Warm and weird. Quiet and loud. In fact, though many bands have explored the latter dynamic—the crux of the ’90s alt-rock explosion—few have done so as effortlessly, as profoundly. To wit, McNew recalls first hearing the President Yo La Tengo EP, released in 1989.

“That was the record that really blew my mind about this band before I ever started playing with them,” he says. “It just sort of showed that they could do anything. It was this very wide range of moods and yet it still [kept] their personality and identity intact. I thought that was amazing, because people are like that. People have different moods over the range of a day.” He pauses, then laughs. “Or, over the range of 40 minutes.”

At the Georgia Theatre, Yo La Tengo will play two sets: one quiet, one loud, a way for the band to lay itself bare while also allowing its songs to breathe. “We’ve been playing songs that really never get played,” says McNew. “Separating the show into those two sets, in a way, is really freeing… All of the sudden, some of these songs can really find a home, and make sense.”

In a press release, Yo La Tengo’s longtime label, Matador Records, lauds Fade as a “career-defining statement,” a line that makes McNew cringe. (“Matador came up with that, not us,” he clarifies.) The praise is nice, McNew says, but as with Jarnow’s book, the canonizing feels a little macabre, a little premature. “I thought Jesse did a fantastic job,” he says. “But yes, it’s very strange… When the book ends, you get a feeling of, ‘Oh, well I’m dead now, right?’

“In the Houston airport,” McNew continues, “there’s a giant statue of George Bush Sr., and he’s, like, 12 feet tall and made of gold, and holding a lightning bolt in one hand and, like, a puppy in the other hand. It’s the most grotesque thing I’ve seen in my life.” The jocular bassist admits he “might be exaggerating” the details. Still, he says, “It’s hard to get that out of your head, in terms of immortalization.”

In fact, when its career-spanning biography hit booksellers’ shelves, the band had just finished the sessions for Fade and were looking eagerly toward its release and beyond. But therein, Jarnow explains, lies his reason for writing the book in the first place. “There are plenty of bands who’ve existed for two or three decades,” he says, “but how many of them have stayed fully engaged for their entire careers and never gone onto autopilot?”

With the rise of the Internet and the ensuing cultural shift, which has (arguably) led to a decline of the regional “scene” and (inarguably) a dramatic increase in the pace that we create and consume, it’s fair to ask if there can ever be another Yo La Tengo, a band that has slowly, surely carved out a legacy of movement and memory.

“Ohm” ends with a mantra, a human loop: “Resisting the flow,” Kaplan sings, until he fades into oblivion. The duality of the song title, the album title, the band itself, becomes clear. Electricity and peace. Ohm and om. Fade, but never fade. Yo La Tengo is never satisfied, but mostly, actually, pretty pleased to still get to do the only thing that has ever mattered.

“Every day that I wake up, I think it’s amazing,” says McNew. “I never take that for granted. No way [laughing]. It seems incredible. It makes me insanely happy.”