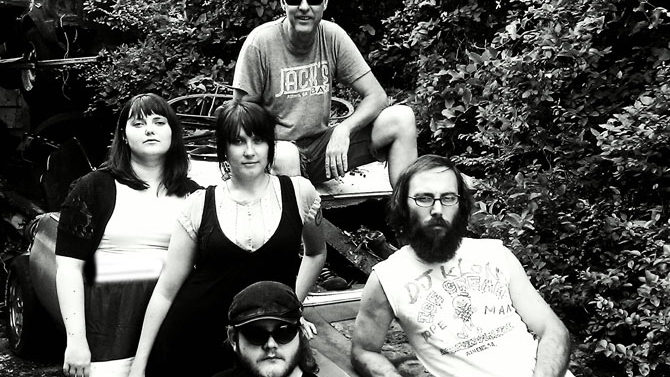 The line between proto-punk and classic punk rock has been blurred by history, both revisionist and otherwise, but there should probably be a new descriptor for bands that inhabit the camp first established by The Ramones, The Stooges and The Runaways. This is where Athens musician Jeff Hannan has lived for as long as anyone can remember, and it’s definitely the spot where his newest band, SheHeHe, feels most at home.

Although it began as an outlet to jam on some songs that hadn’t been played out yet, the project quickly evolved into a “proper” band, and now features Hannan on bass, Noelle Shuck on rhythm guitar, Jason Fusco on drums, Nicole Bechill on vocals and Ben T. Bone on lead guitar. (Founding lead guitarist Michael Paumgardhen exited the band sometime around its first anniversary.) In pure Athens form, Hannan and Fusco met at work. Fusco brought in Bechill, and Shuck and Bone jumped on board after Paumgardhen’s exit.

“[We] played a show with Thunderchief at the Caledonia and we were all really impressed with Ben’s guitar work,” says Fusco. “When Michael left the band, I immediately thought of Ben.”

By this time, SheHeHe had already come up with a term to describe its sound, which is predicated largely on non-traditionally placed lead guitar parts: “new American jet rock.”

“[As the band came together] everyone started writing, contributing, arranging and collaborating,” says Hannan. “Every song we wrote solidified the new SheHeHe formula… The vision of this new sound was not only achieved, but [we] exceeded all expectations.”

Buoyed by an intense rehearsal schedule and regular out-of-town gigging, the band entered the studio a few months back to craft its debut album, which it titled, appropriately enough, New American Jet Rock.

Although sessions were scheduled at a less than ideal time—the day after a late-night gig—SheHeHe entered Full Moon Studio with engineer Jay Rodgers and finished its planned five tracks in one day. Although male and female vocals were tracked separately, everything else was done live. The band kept going until it had finished 11 tunes and had a full album under its belt.

There aren’t any light moments on New American Jet Rock. It announces itself loudly and immediately. It’s hard to understate the appeal of what Hannan calls the group’s “gang vocals”—that is, when the whole band is singing at once. Further, SheHeHe seems uniquely situated in its chosen genre, which is typically very male-oriented, macho and boys-club-ish.

Indeed, for decades, women in such groups have been relegated to support positions, although they’re often oxymoronically, decoratively, placed up front. But SheHeHe exists wildly outside of this; Shuck and Bechill are such essential parts of every process and performance that it feels old fashioned to even mention. Audiences trained on years, even decades of the old model, though, no doubt appreciate and respect this fresh-air aspect of the band very much.

Lyrically, it must be said, SheHeHe doesn’t break any new ground. The group sings about waitresses, losing one’s mind, idiotic sex boasts (“I’ve got a bong and I’m bangin’ your mom”) and other well worn rock and roll tropes. Still, if you step back and just enjoy the music, it’s pretty easy to not really notice any of what’s being sung. There’s no lyric sheet that comes with the album, and you’ve gotta lean in pretty closely to pick out gems like the one mentioned above. And anyway, rock and roll shouldn’t be gauged by its social consciousness, but by whether or not it hits that fist-shaking nerve. And New American Jet Rock hits it square on.

SheHeHe’s presence has grown locally, but audiences elsewhere have begun to take notice, too. The band recently played several Florida dates and has plans for more regional touring and possibly an East Coast run this summer.

“We all want to do everything we can to make this band as successful as it can possibly be,” says Bechill. “We just booked a show on Tybee Island with Barb Wire Dolls on Valentine’s Day. Pretty exciting.”

Meanwhile, Shuck gives posi-shout-outs to almost everyone. “One of our favorite parts of the shows we play is the people we meet and get to know, are inspired by—and inspire,” she says. “The music scene is a lot of give and take between bands, club owners, bar owners and show-goers, and we’re truly excited to be a part of the huge network of artists and patrons that keep good music alive and thriving.”