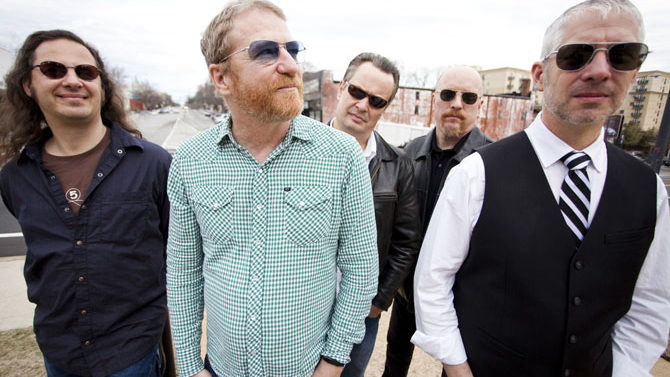 To see the whole picture, we have to travel back in time, and many miles away. California’s Inland Empire in the early ’80s was a hardcore haven—not the sort of place you’d expect a bunch of cagey, cultish pop-rockers to flourish. Camper Van Beethoven, is often cited as stylistic forbear of what would come to be known as “indie” or “college rock,” but the terminology is less significant than the attitude.

“It [was] sort of a joke, but sort of not,” says the band’s frontman, David Lowery, perched in front of a computer in the den of the historic Cobbham house he shares with his wife and manager Velena Vego. “Camper Van Beethoven was a very odd band to be in in 1983.”

In person, Lowery exudes a certain jaded awareness, the same brash and cloudy self-satisfaction that is at the heart of his music. His wordy lyricism has often bordered on the banal (see the beloved “Take the Skinheads Bowling”) but has also always seemed weirdly sagittate, aimed at some partially obscured (internal?) target.

“Even at their most lysergic… they were always pretty studently,” wrote Jon Dolan in a 2003 Chicago Reader article. “When indie rock rolled around, we’d call it ‘snarky,’ but Lowery’s mean spirit seemed to come from a real sense of disappointment; he could poke fun at hippies and punks and pseudointellectuals all he wanted, but he was staring in a mirror.”

The band’s quirky, literate rock bore signs of ska and world music but was grounded in a decidedly Californian jangle—think a marginally more polished Pavement, years before that group cheekily debated the merits of having “Two States”—and Camper, in the mid-’80s, churned out ultra-weird, insta-classic records at a steady clip. Consider Telephone Free Landslide Victory, a scrappy pop album that appeared amidst a sea of blistering West Coast punk and whose first song was called “The Day That Lassie Went to the Moon.”

The just-released La Costa Perdida, Camper’s eighth official studio album (its first since 2004), is perhaps the most straight-up record the band has ever made, a 10-track mixture of earnest, melodic love songs (“Come Down the Coast”) and classic CVB cheek (“Peaches in the Summertime”). It is a fine addition to an enviable discography, and Lowery is quick to compliment his cohorts.

“Those guys are really good, quick, fast players,” he says of his bandmates. “What they have up here [pointing to his head], getting it into their hands, that’s the good thing about Jonathan [Segel], Victor [Krummenacher] and Greg [Lisher].”

La Costa Perdida sounds, too, like a band revitalized by the realization of its own influence. Vego recalls that, prior to returning to the stage in 2002 after a decade of inactivity, Lowery fretted that perhaps Camper had been abandoned to time. A string of sold-out shows—and the support of modern indie masters like Modest Mouse—proved otherwise.

The approval of Lowery’s fellow artists clearly means something to him. He is enthused about the new album, but he’s equally jazzed to discuss the highlight reel. Throughout our conversation, tales of early successes—opening for Minutemen, for Dead Kennedys, for R.E.M.—abound, as do memories of networking in a pre-Internet age.

“One of them, I don’t remember who, wrote a review for Maximumrocknroll, basically making it cool for the punk rock kids to like us,” he recalls. “These are the small things—you’re like, wow, if we hadn’t had that, I don’t know if we would’ve gotten our chance.”

Lowery recalls the first comment that appeared under “Letter to Emily White at NPR All Songs Considered,” the most-viewed post by far on his Trichordist blog.

“We’re gonna turn you into Lars Ulrich,” the comment read, a reference to the Metallica drummer who took on then-filesharing giant Napster and quickly became Internet enemy number one.

ICYMI: Last June, White, a young NPR music intern, wrote a blog post about having no connection to physical music and innocently proposed a “universal database,” where “everyone would have convenient access to everything that has ever been recorded.”

Lowery’s unsolicited response was a passionate, pedantic indictment of the system (“the new boss,” as he likes to call it), that murky, quasi-legal miasma of online streaming and sharing that has led to a dramatic decrease in artists’ revenues. His letter lamented the “fundamental shift in principals and morality… about who gets to control and exploit the work of an artist.” Controversially, Lowery linked the new boss in no uncertain terms to the suicides of two longtime—and debt-burdened—musician friends, Mark Linkous and Vic Chesnutt.

The response was swift, a barrage of online attacks from tech folks and free culture adherents—”Freehadists,” as Lowery not-so-subtly calls them—who took issue with his comments and aimed, not so subtly, to take him down.

Many painted a picture of Lowery as a bitter, vengeful failure. “Why don’t you face it. Most people don’t want to hear your music,” replied a particularly animated Bob Lefsetz, the industry contrarian who has made a career out of, well, ranting on the Internet.

One of the most widely shared responses came from DigSin CEO Jay Frank, who concocted a post titled “Is Stealing Music Really the Problem?” that cited Google figures purporting to show “less than 50 people per month in the entire world are even showing intent to steal [Lowery’s] music.” The problem, Frank argued, was not piracy but indie “neophytes” like Lowery, who resist change while major labels adapt and benefit.

Lowery, an early proponent of new technology and filesharing who has long offered up free audio recordings of Camper concerts online, laughs that last charge off and explains that what he is against is a furtive and widespread sort of corporate profit that occurs without artist compensation.

“There’s this nihilistic version of freedom that these companies are peddling, and it supports a commercial entity,” he says. “And you have a lot of people who are basically paid to argue those points by these commercial institutions.”

It was Frank’s statistics that bugged Lowery. In a claim that he acknowledges smacks of “far-fetched, tinfoil hat stuff,” he says the tech CEO’s dismissive response was engineered by Silicon Valley itself. So convinced was he of this, in fact, that he called Frank to verify his hunch.

“I called him and asked him how he got his facts, and he was obviously taken aback… And he goes, ‘Are you sure?’ And I go, ‘Yeah, this doesn’t work, that’s not really right.’ And he says, ‘But I talked to Google that day, and they showed me how to do it.'”

Lowery smiles incredulously. “Why the fuck is Google, a company that made $34 billion in profit last year, worried about a fucking indie rocker like me?” he asks, before adding, righteously, “That’s kind of cool, man.”

Three decades in music is a long damn time. Let’s take a moment to really dig the fact that Camper Van Beethoven, a 30-year-old band of 50-year-old weirdos, is still going strong. Here, smack-dab in the middle of the future, where fanzines have been replaced by blogs at a thousand-to-one ratio and a fair to good amount of human discourse takes place in the form of animated .gifs, is a band led by David Lowery. The Cold War is over, but he is still singing and playing guitar, still negotiating, in his own way, the world of good guys and bad guys, of crooks and criminals.

People still get high, but the “radio” of the classic Camper tune quoted above has given way to Spotify, while Lowery’s faux-hippie sentiment has shifted, given way to a serious war waged on an emerging culture that would seek to discredit art by quite literally devaluing it.

Paradoxically, the backlash to Lowery’s blog screed not only engendered an important conversation, but also established its author as one of that conversation’s most influential voices: a simple Google search for “David Lowery” reveals pages and (presumably undoctored, but you never know) pages of passionate debates on piracy, filesharing and the new frontier of music.

Likewise, Vego recounts the phone calls that have arrived in Cobbham from artists with godly names like Waits and Burnett—supporters, even if they remain mostly in the shadows, afraid, perhaps, of being Ulrich’ed.

“I don’t think people realized, when David wrote that letter, it wasn’t against [Emily White] per se, it was just kind of a door to be able to express this,” says Vego. “But, as David pointed out in his letter to her, he was very close to Mark Linkous. He [was] very close to Vic Chesnutt.”

“They’re right there,” Lowery says, gesturing toward a picture window that frames a lush Georgia yard. Across the way sits a house—Chesnutt’s house.

“That was the thing,” Vego continues. “We’ve made our money. Cracker [because of that band’s hit song “Low”]—we get paid. But a lot of our peers do not. And we’re seeing it still, to this day.”

Paid or not, the sudden weight of the creative world—and the impact of the Internet’s ire—is enough to wear on a man, and Lowery half-jokes about allowing himself just one year of martyrdom, of blog warfare, before he passes the torch to some equally fervent, equally like-minded soul. Of that deadline, he notes, “It’s getting close.”

WHO: Camper Van Beethoven, Muuy Biien
WHERE: 40 Watt Club
WHEN: Thursday, January 24
HOW MUCH: $12