The Beards of Comedy 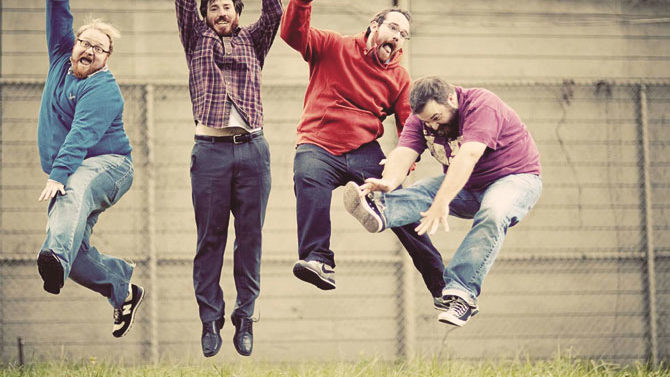 Everyone loves T.J. Young. Well, everyone except mall security guards. Just as he’s about to start talking to Flagpole about the upcoming Beards of Comedy tour, a voice in the background yells, “Hey, bro!”

“Uh, there’s a security guard coming toward me. Let me call you back,” Young says, and hangs up.

When we finally reconnect, a few hours later, he’s still bemused. “Yeah, they caught me on camera,” he says. “They’ve got guys in the control booth looking for people charging up.” Apparently, as Young discovered firsthand, Brooklyn malls have a strict no-no policy about using their electricity to charge your cell phone.

Don’t feel too sorry for Young, though; the altercation with Brooklyn’s Paul Blart is about the worst thing that has happened to him since he moved there. A former Athens musician, Young put down the drumsticks in 2007 and decided to give comedy a try. Within a year, he was putting together showcases at The Loft, hosting open-mic nights at Flicker and bringing nationally known acts like Patton Oswalt and Aziz Ansari to the 40 Watt Club.

But Young’s group, The Beards of Comedy, was born out of his first love: performing onstage. One night, after a performance in Atlanta, he recalls sitting around with show-mates Andy Sandford, Dave Stone and Joe Zimmerman, when someone mentioned Oswalt’s touring group The Comedians of Comedy.

“Joe looked around at the rest of us and said, ‘We should be The Beards of Comedy,” Young recalls. “We did a show with that name at Smith’s Olde Bar in Atlanta on December 14, 2008. We weren’t really planning to keep going, but… we thought the chemistry really worked, so we were like, ‘Let’s do it!’”

The Beards are a well balanced team. Stone and Sandford lean towards character-based humor and pithy punch lines, while Zimmerman and Young operate more in the observational tradition. Their complementary styles have worked so well, in fact, that The Beards have been able to tour nationwide and release two albums on Comedy Central Records. And last year, armed with these successes, the guys decided to make the move to the big city, or rather, cities; Stone left for Los Angeles, while the other three Beards moved to New York.

Within a few months of the move, Young was already entrenched in the local comedy scene. “I had a night in March when I did an open mic in Brooklyn at 8 p.m., took the subway to Queens to host a show I was co-producing at 10 p.m., then… hailed a cab into Manhattan to perform a comedy sketch on a midnight show… That felt pretty ‘New York comedian’ to me.”

Still, Young is proud of the Athens comedy scene he helped to create, and he maintains that his time here prepared him well.

“Starting out in a town like Athens, where there are lots of creative young people, that’s a microcosm of what New York is,” he says. “Athens audiences are definitely on the more comedy-savvy end of the spectrum. That has certainly influenced my material and prepared me for the smart NYC crowds. Also, having to make my own opportunities in Athens, for the most part, trained me for all the networking and hustling you have to do in a big city… And Athens comedy shows, since there’s no comedy club, are all very DIY and are usually done in venues where people aren’t used to seeing comedy. [Likewise], a lot of the best shows in NYC are in restaurants and bars, with crowds packed into back rooms, most of them wearing skinny jeans. Feels like home.”