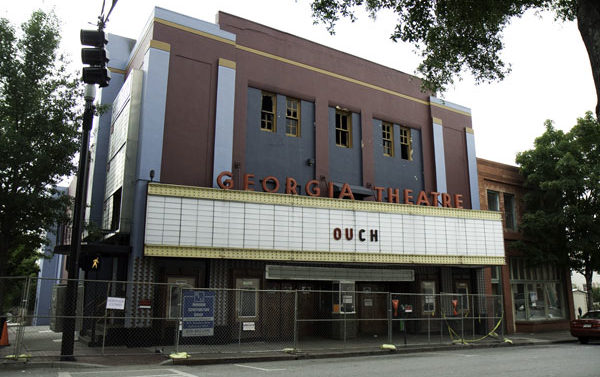 On June 19, 2009, bystanders watched helplessly as a large part of Athens history vanished in flames. “You could smell the stench of burning history throughout downtown Athens that day,” says Eric Krasle, the executive producer of the Sphere Vibe Films documentary Athens Burning.

It has been a year and a half since the Georgia Theatre was left in ruins, but even the tallest flames 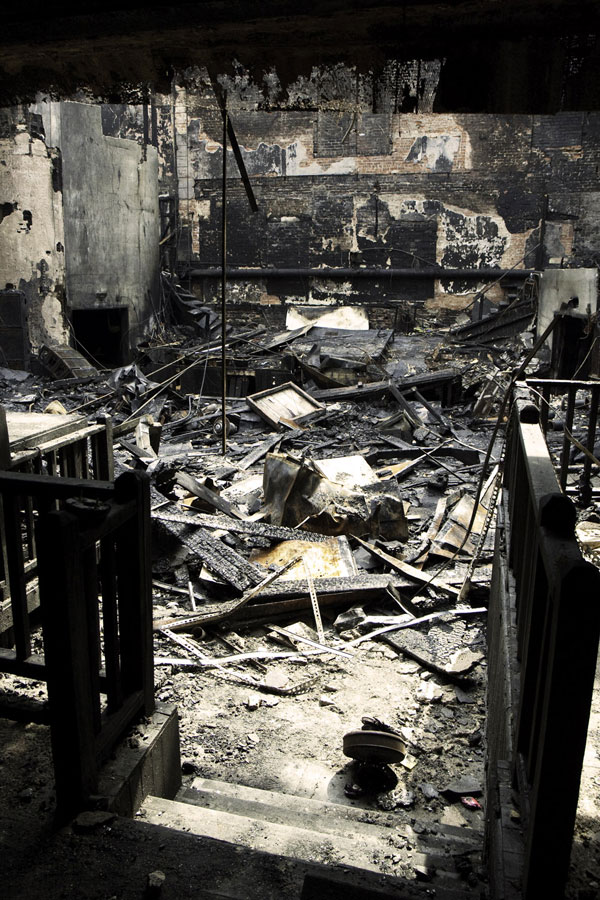 cannot suffocate the legacy of such an important building. Three filmmakers, Eric Krasle, Andrew Haynes, and Jacob Kinsman, have been working to preserve the Theatre’s memory in the documentary, which premieres this week at Beechwood Cinemas.

“The film is truly a labor of love,” says Krasle. It tells the story of the Georgia Theatre: the history, the music, the fire, and the rebuilding process.

The building on the corner of Clayton and Lumpkin streets has served many purposes since it was built in 1889. Before it was the quintessential music venue that it was before the fire, the building was a hotel, a Methodist church, a movie theater, and even YMCA offices before it was officially named the Georgia Theatre in 1967. Athens Burning captures the historical significance of the Theatre and its meaning to individuals over the years.

“After the fire, I knew I had to make a documentary,” says Andrew Haynes, the film’s story editor. ”I am a musician first and foremost. I played in bands at the Theatre, and really have a connection to the place.”

According to director of photography Jacob Kinsman, the film features “…a lot of local music… it’s quirky and unique, which is why we are on the map.” The documentary includes footage from epic concerts at the Theatre in years past (and benefits held at other venues after the fire) as well as interviews with bands that played there.

“Sound Tribe Sector 9 were the coolest to meet and hang out with… They started in Athens and got big fast,” says Haynes. “Everyone was really cool and happy to talk to us once we tracked them down.” Among others interviewed for the film are the Zac Brown Band, Vic Chesnutt, Drive-By Truckers, Perpetual Groove and even Widespread Panic.

Wilmot Greene, the Theatre’s owner, calls the film “a time capsule.” To many people, he says, the Georgia Theatre and music are synonymous. “I think it will be neat to hear the artists’ take about what the Georgia Theatre meant to them,” says Greene. Hearing bands compare their experience in Athens to other places gives a good perspective, he says: “The bubble that we live in is a pretty amazing bubble.”

The filmmakers agree that creating the film has been very hard work. “We really want to give people their money’s worth when they see this film, so we have bitten off a lot,” says Krasle. “We have tried to give people the heartfelt story without all of the clichés; we are trying to get the guts.”

Haynes says that the hardest part of creating the documentary was crafting a story out of so many people’s quotes and pieces of video footage. Kinsman agrees: “It has been difficult just trying to fit in the entire Athens music scene. We have interviewed so many people and bands and it is hard to try not to leave anyone out,” he says.

According to Krasle, the filmmakers do not expect to make a large profit from the documentary. It was made with private funding, and proceeds will go towards its investors and to help fundraising for the Georgia Theatre.

“The Georgia Theatre was more than just a building. We want people to come to see the importance of it and its returning,” says Haynes. “I want [the film] to reignite people’s passion for the Theatre.”

Just after the fire, benefits were frequent, passions were high, and people were ready to help, but as the dust has settled, people’s intensity fizzled out too.

The marquee at the Georgia Theatre reads “Men at Work,” and that description has been apt for the filmmakers of late. Although they have received loans and have a prospective reopening date, the hardships are not over yet.

“The Georgia Theatre is still facing an uphill battle,” Haynes points out. “Even after they open, they will face enormous debt. They still really need the support of the community, and hopefully this documentary will remind people of that,” he says.

“When people come see the film, I think that a lot of people will see themselves in it: people they know, places they know, and the bands they know,” said Krasle. “Get ready to hear the sounds and the heart of the Georgia Theatre.”

Athens Burning will premiere on Friday, Jan. 14 at Beechwood Cinemas. It is currently scheduled to play two shows every night for a week.