Photo Gallery and Review: U2 at Infinite Energy Center

All photos by Mike White

Monday night, U2 made their long-awaited return to the Atlanta area when they made a stop at the Infinite Energy Center Arena in Duluth on their The Experience + Innocence Tour. It has been nine years since the Irish rockers played the Georgia Dome to a reported crowd of 61,000 during their 360° Tour. Comparatively, Infinite Energy could be considered “intimate” with a capacity of 12,000.

The crowd was eager to hear songs from the newest albums, and the band did not disappoint. During the 24-song set spanning over two hours, Bono, The Edge, Adam Clayton and Larry Mullen Jr. fully represented their 42-year career in an over-the-top stage production—something U2 has come to be known for. The setup consisted of two stages—a large stage to the far end of the arena and a small stage deemed the “E” stage on the opposite side of the floor, where the band performed in the round. A catwalk connected the two and allowed the band to move freely from stage to stage. Hanging above the catwalk was an apparatus containing its own platform with displays on both sides. This apparatus could also be lifted above the catwalk. It’s no wonder that it takes a full day just to construct everything. 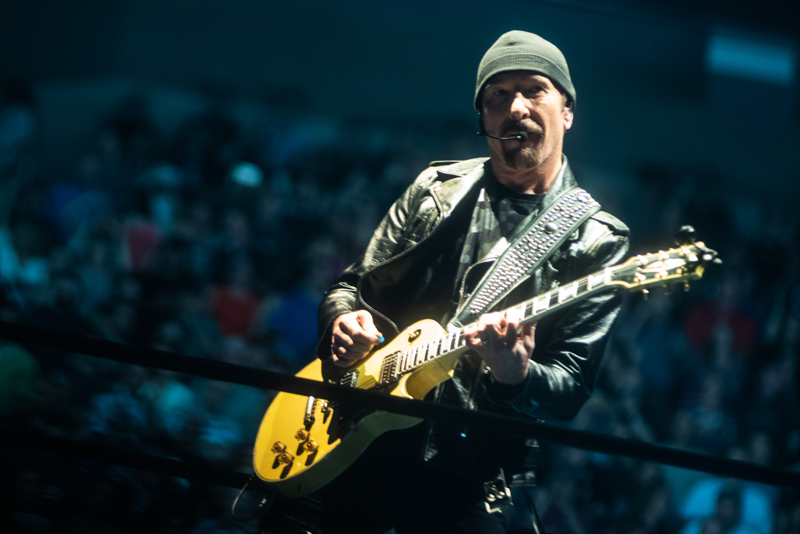 While artists such as Jack White are banning cellphones at shows, U2 are not only embracing it, they are encouraging it. Prior to the show, fans were asked to download the “U2eXPREIENCE” app, which presents an augmented reality (AR) experience when either pointing your phone’s camera at the Songs of Experience artwork or the pre-show visuals displayed on the screens connecting the two stages. The first song of the night, “Love Is All We Have Left,” from Songs of Experience, also featured an AR component where a giant AR Bono appeared and sang while the real Bono was underneath controlling its movements from the platform between the screens—pretty cool! 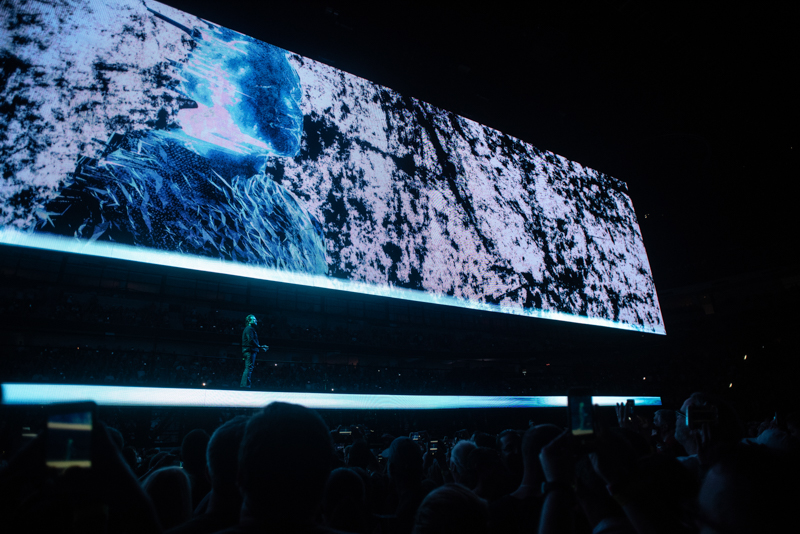 After “The Blackout” and “Lights of Home,” both new songs off Songs of Experience, the band was ready to dish out the classics the crowd was anxiously awaiting. As they made their way from the catwalk to the main stage, The Edge started playing the unmistakable opening riff to “I Will Follow” from the band’s first album, Boy.  This was all the crowd need to take things to the next level.  The hits continued with “Gloria” and “Beautiful Day,” where Bono changed the lyrics from “See China right in front of you” to “See Mike Mills right in front of you,” as a shout-out to the R.E.M. bassist, who was in attendance. 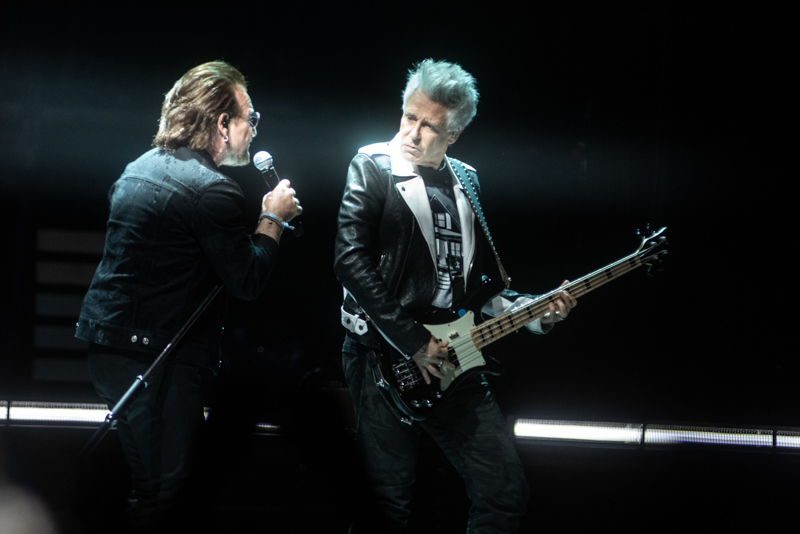 After a brief intermission featuring a cover of “Hold Me, Thrill Me, Kiss Me, Kill Me” by Gavin Friday with new animation, the band made its way to the E stage to unleash two of its rockers, “Elevation” and “Vertigo,” where they added the line, “It’s the end of the world as we know it, and I feel fine” as second shout-out to Mills. Bono then summoned Mr. MacPhisto via Snapchat filter and proceeded to quote lyrics from “Sympathy for the Devil,” before launching into “Acrobat” from Achtung Baby, which they started playing live for the first time this tour. 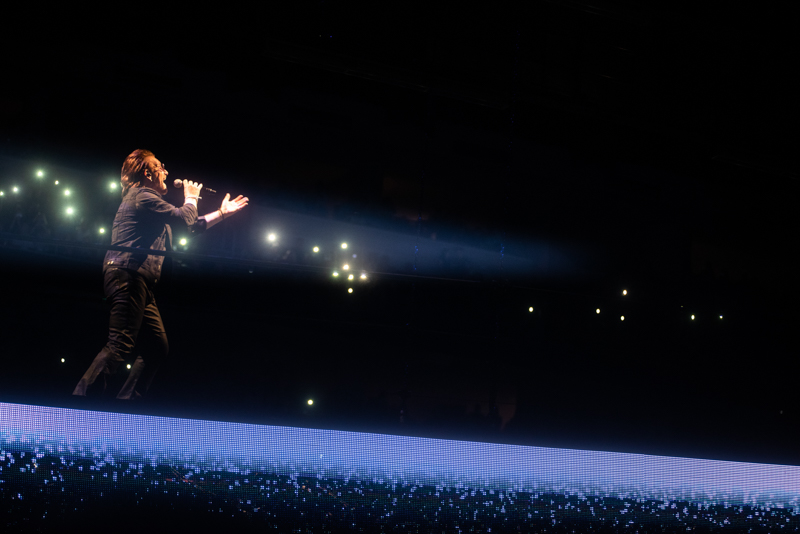 Things took a serious, political tone as Bono and The Edge reminisced about the recording of 1997’s Pop and the song “Staring at the Sun,” saying, “I don’t even really know what the song is about, but I think it has something to do with being willfully blind.” As they started the song, images of torchlight-bearing white supremacists marching through the streets of Charlottesville appeared on the screens. The footage continued to roll as The Edge played the unforgettable opening riff to “Pride (In the Name of Love),” with Bono saying afterward, “I think of the Reverend [Martin Luther King Jr.], down the road, who 50 years ago gave his life up so we might [realize] his dream.” 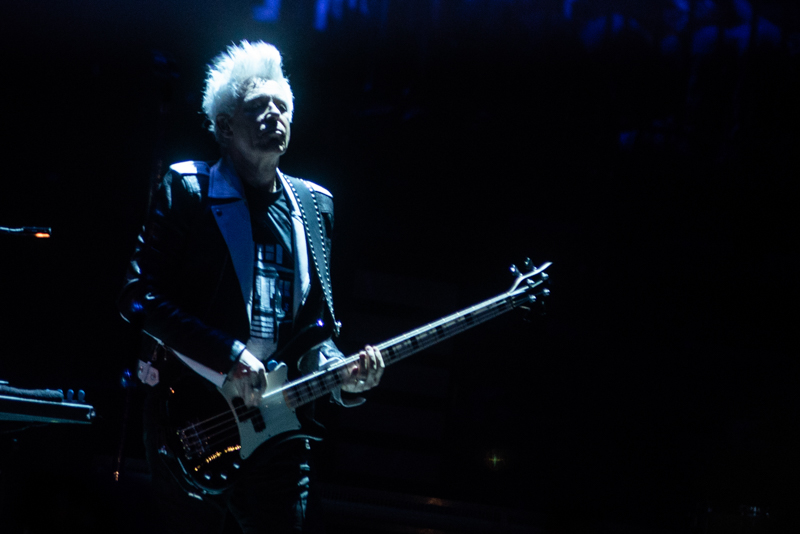 Bono and The Edge rejoined Clayton and Mullen on the main stage to finish out the set with “Get Out of Your Own Way” and “American Soul” from Songs of Experience and “City of Blinding Lights” off of 2004’s How to Dismantle an Atomic Bomb. 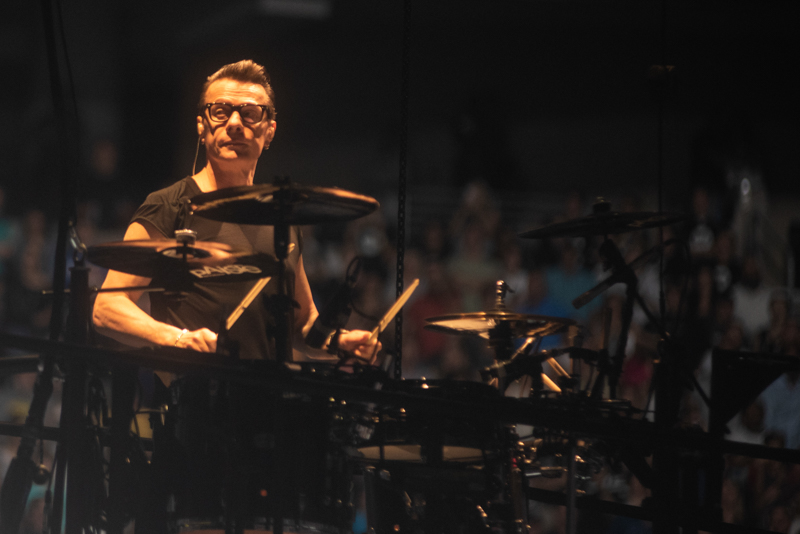 Before starting the encore, Bono gave a shout out to the Coca-Cola Company, mentioning that years ago he went to Coke and asked if they would help him fight HIV by sending medication to Africa, to which they said “yes.”  With that, the band started into “One,” where the crowd used their phones to light up the arena. Before calling it a night, the band played two more new songs, “Love Is Bigger Than Anything in Its Way” and “13 (There Is a Light).”  Most bands would never open and close a set with new songs, but U2 is not most bands. 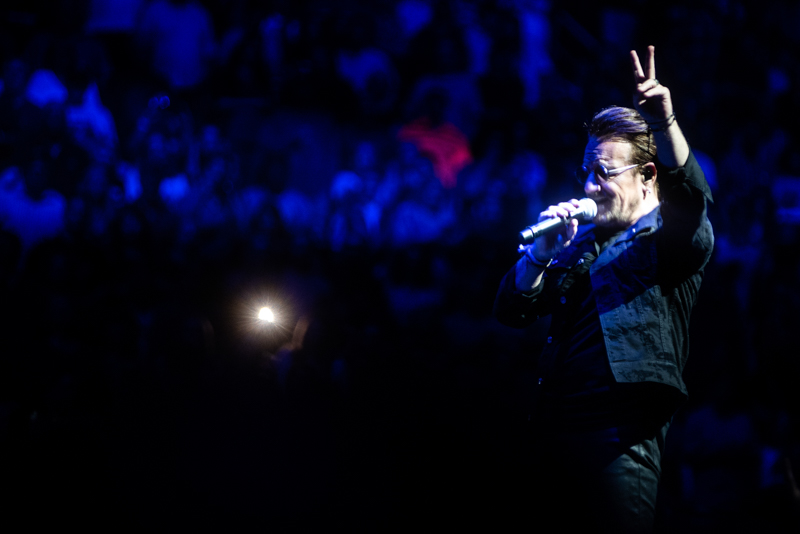 Fans hoping to hear Joshua Tree favorites “Where the Streets Have No Name,” “I Still Haven’t Found What I’m Looking For” and “With or Without You” did not get the opportunity. On the recent 30th anniversary tour, they played the album in its entirety, so it’s understandable that they’d want to give those songs a rest. However, given massive amount of great material, the band still was able to build a solid setlist able to satisfy any fan. Let’s hope it doesn’t have to hold us over for another nine years. 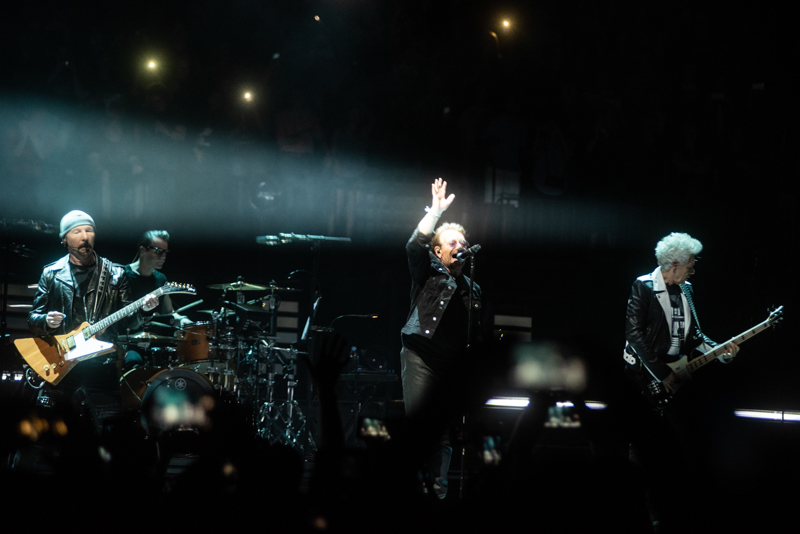