For just about three weeks leading up to this year’s South by Southwest, I’d been increasingly bothered by sustained pain on my upper right side that spread from my shoulder to my neck and then straight down my arm until everything felt like it was on fire all the time. After dragging myself to double appointments with both an acupuncturist and chiropractor the week before traveling, it was determined that I was injured for the most unexciting reasons (years of bad sleeping positions, poor posture, general misadventure).

I was within a hairsbreadth of canceling altogether, but managed to get the pain knocked down by about 70 percent before it was go time, so I decided to go. That said, I hope anyone reading this has enjoyed my previous tales and reportage from this head-kicker of an event in years past, because before I set out the door I knew I would have to take it easier this time around. 2018 would be the first time out of nine total so far when I wouldn’t be running around over 20 hours a day doing God knows what.

All that said, I still managed to get myself right in front of Priscilla Presley—who seemed kind and generous—to listen to her talk with the producer and director of the upcoming HBO documentary “Elvis Presley: The Searcher,” which premieres Apr. 14. She’s the executive producer and—as the entire purpose of the film is to present The King as an artist perpetually looking for inspiration and wanting to break free from his image and cloistered existence—necessarily granted some previously unobtainable access to certain archives.

Four years ago, the year SXSW hit its peak of hugeness and out-of-hand-ness, I saw Lisa Marie Presley perform just down the street from where her mom was now speaking. There’s nothing terribly cosmic about that, but it’s still pretty cool. 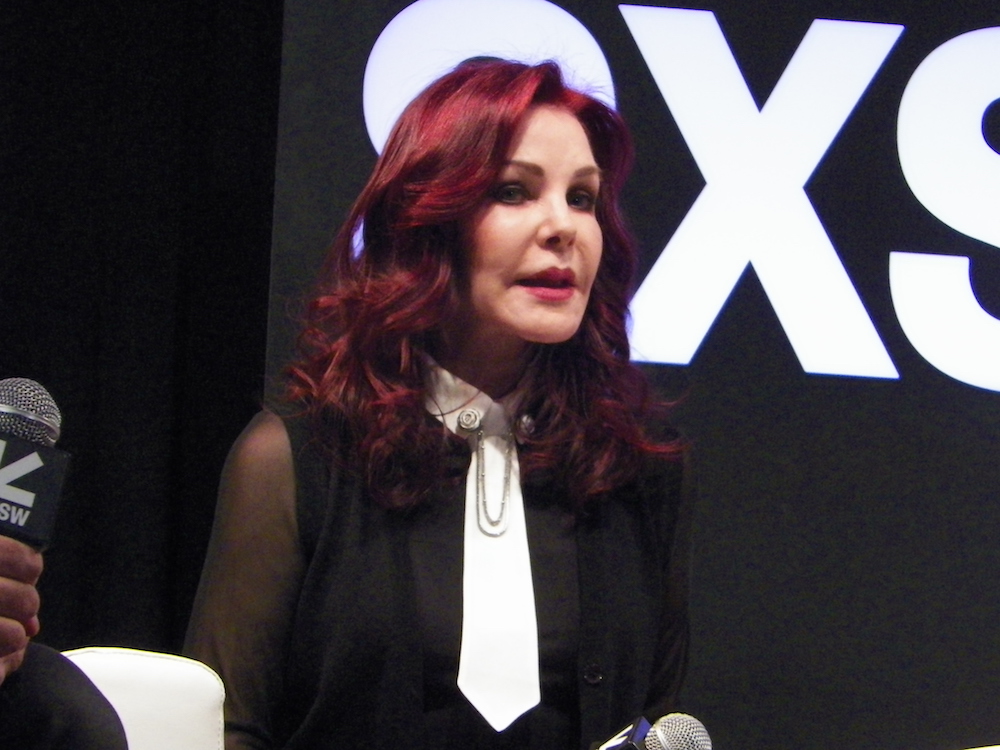 I sat deep in the back for a panel titled “Why Music Journalism Matters in the Streaming Era,” which, come on, is just about the most self-serving, justify-my-job title possible. Even so, most of the discussion was really about how different publishers utilize streaming services, the difference between focusing on deep coverage of full albums versus quick-hit writing about singles, and audience engagement with each. Oh yeah, it was moderated by Pitchfork founder Ryan Schreiber, and the panelists were Puja Patel (Spin), Marcus Moore (Bandcamp), Chris Mench (Genius) and my personal favorite of the bunch, Andy Cohn (The Fader).

Of particular interest was Cohn’s relating how The Fader still spends hundreds of thousands of dollars on each print issue because certain things (photos, lengthy interviews, etc.) are better presented that way, and to that end, subscriptions to his print editions continue to rise.

But even as the aesthetically charged publication continues to maintain its influence and essential critical voice while simultaneously increasing its audience, even it is no match for the steamroller of real-estate development that has been Austin’s signature move for the past several years. The exceedingly popular Fader Fort—generally wonderfully curated, staffed and presented—lost its previously huge outdoor location last year. Seventeen years strong, it’s gone back and forth between being a private event, an official event and an open RSVP event, but it’s now been a private, invitation-only event for two years.

The location this year was spitting distance—if you’re a particularly strong spitter, that is—from its old location, but only about a third as big. It felt not exactly claustrophobic but definitely squeezed, even at times when the crowd was relatively light. Personal favorites this time around were Bogalusa, LA’s JayDaYoungan and perennial favorite and Texas rap god Bun B (ex-UGK) from Houston.

Lyor Cohen, currently global head of YouTube Music and former artist manager at Rush Productions and head of Def Jam, was the keynote speaker this year, and nearly every outlet is reporting on one specific thing he said, as will I. His position is that we’re headed into what he calls the “golden era of the music business.”

I dunno, I don’t really think I’m the most cynical guy in the room, but this statement is hot off the news of multiple deals struck between YouTube and several major and independent labels, as well as YouTube’s repositioning itself to launch another paid-subscription model for music. The generous part of me wants to applaud and embrace the notion of sustainable, artist-compensating and audience-retaining digital services, but I must admit some eye rolling and a feeling that for someone selling something and making money—physical records in the 1980s or streaming services now—it’s only natural to refer to that time as golden.

You wanna know who is actually golden? Todd Rundgren. Even those who will never know his name know at least some of his work. And although he says that one particular song came to him in a dream, all I need to do is mention Carnival Cruise Lines or drive-time radio on Friday afternoon and you know exactly which bill-paying tune I mean. He was on a songwriter’s panel with, honestly, three other songwriters who I didn’t think were very good at all, but that’s not my fault. They each played a song (except Rundgren), so they walked right into that. No need to mention them, either, because no one cares.

On the Athens-music front, the name I heard bandied about most from actual man-in-the-street music fans, as opposed to all us chi-chi “industry professionals,” was Linqua Franqa. I think by week’s end she’ll have played something like 13 times. At the Tiger Bomb Promo showcase, it was nice to catch Hater, who came all the way from Sweden to strum gentle, yet occasionally pensive full-chord indie-pop right into my ears. Plus, their name kinda rules. But I couldn’t stay around there long, because time was tight and I really needed to get across the street to goth/industrial mainstay Elysium, where I’d previously seen people like Gary Numan and Yoko Ono. I fully expected a sizable line and anticipated waiting for a while.

But there was no line. I breezed right in. This was the single show of the week I’d most anticipated and waited for, yet there was no massive demand for the performance by the author of “Hello, It’s Me,” “I Saw The Light” and the afore-unmentioned “Bang the Drum All Day.” There was no standing-room-only crowd at this tech-heavy festival for one of the internet’s earliest musical advocates and participants. All of which is to say, I saw Todd Rundgren from less than 5 feet away. And he was spectacular.

To be entirely fair, by the time he came on, the room had filled considerably such that its approximate capacity of 300 was narrowing down, but it was still very comfortable. No one knew what he was going to play. Hell, the man has been releasing records since 1968, and while there are certainly songs he’ll never play again, that’s still a half-century-deep well to draw from. Because of this, there was gonna be a good chance I would know very little of what he played, or I’d know everything he played. Well, it was the former. Every song was brand new to me, except the rousing and warming “One World,” released originally with his group Utopia in 1982.

During Rundgren’s panel appearance, he mentioned he never wanted to play piano onstage again, and he didn’t. That was handled by The Cars’ Greg Hawkes, whose presence explained Rundgren’s encore of “Let the Good Times Roll.” But it wasn’t as smooth as it sounds. After “One World,” the whole band went offstage, then Rundgren came back, grabbed his guitar and started playing the opening cords. The band didn’t come back on until Todd turned around, expecting them to be there, saw the empty stage and said, “Where the fuck are these guys?” Everyone came back out, played a decent but ramshackle version of the song and said goodnight.

It was a most welcome moment of flaw-filled, off the cuff rock and roll impromptuism by one of the most technologically perfect recording artists of his generation, and it provided me with what I always look for during SXSW. It was that singular performance that turned everything else that was enjoyable, compelling and/or essential into gravy.

SXSW in Photos: Say Anything, A Place to Bury Strangers, Shame, Shopping and More