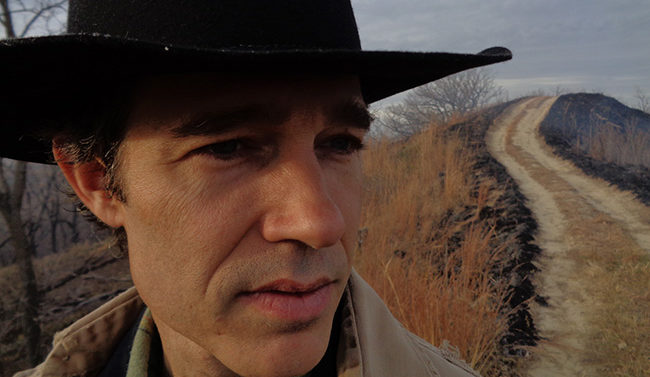 There is an immutable elegance lying at the heart of life’s struggles. The tension that binds the spaces between hope for retribution and total breakdown is rich fodder for Omaha, NE songwriter Simon Joyner. With his latest album, Grass, Branch & Bone, Joyner summons his most compelling stories via the derelict Midwestern landscape and the characters he finds there, lost in moments of hopeless abandon and glowing nostalgia.

Since 1991, Joyner has served as a crucial figure in the secret history of Midwestern underground music, reaching beyond the tropes of indie rock and acoustic music to arrive at his austere songs for the damned. On Thursday, Sept. 29, Joyner plays a low-key, solo set in the intimate setting of White Tiger Gourmet. The one-off show—not part of an tour—is akin to the more intimate living room shows that he often plays in people’s houses across the county.

“I love the immediacy of performing on the same level with the audience,” Joyner says. “It’s as close to passing around the guitar at a party as you can get, and that’s the best way to experience music, I think. Up close and personal, like the lyrics themselves.”

For this stop, he’s helping family move to the area, so he picked up a gig while he’s in town to catch up with old friends while playing some songs. “I’ll probably play my nylon string guitar for this show,” Joyner says. “It has a nice pick-up in it, so it works just as well for live performances.”

Expect to hear a comprehensive set of songs from throughout his career, along with a handful of newer numbers he’s working on for an album he plans to start recording within the next six months. Folks are allowed to BYOB, and cover donations will be taken at the door.

Athens Power Rankings for the Week of Sept. 26

Where to Watch the Presidential Debate (and Drink) in Athens