First Lady Michelle Obama appeared on the South by Southwest convention hall stage today following her husband, who took part in an informal discussion on the same stage last week. Her appearance was announced excitedly but explained vaguely. Press releases only mentioned that she was planning to talk about ideas and issues surrounding the Let Girls Learn initiative, and that she would be joined by host Queen Latifah, songwriters Diane Warren and Missy Elliott and actress and activist Sophia Bush.

Press access was vetted through the White House, and arriving upwards of three hours early was necessary to jockey for good positions on the photo riser and get through the necessary but hardly cumbersome security that was arranged for day.

A video promoting the Warren-penned “This Is For My Girls” played on big screens immediately before duo Chloe & Halle, whom the announcer made a point to note were “just signed to Beyonce’s record label,” performed a bit of it. The recorded version is an all-star affair coordinated by the AOL Makers studio and featuring Janelle Monae, Kelly Clarkson, Missy Elliott, Jadagrace, Zendaya and Kelly Rowland, in addition to the aforementioned pair.

As a group project, it has a hefty, aural significance and is a stirring piece. Chloe & Halle on their own, though, gave it a limp run-through. For that matter, the two other songs they played were painfully woeful and, honestly, their whole appearance seemed like an added-on promotional gimmick.

Finally, host Queen Latifah came onstage and introduced Bush, Obama, (see what I did there?), Elliott and Warren. By this time, enough promotional video had been played that even those who weren’t initially familiar knew pretty much what the Let Girls Learn initiative was all about. Briefly, it’s a program that addresses the dire need for promotion and activation of education for girls and young women. The estimate given is that approximately 62 million girls are living with no educational resources in their lives. The causes of this disparity range from economics to religion to war to simply not valuing the education of women. It’s such a righteously defensible effort that even a complete curmudgeon would have to perform ridiculous mental gymnastics to oppose it in any way.

After much anticipation, though, this esteemed panel wound up being a total letdown. Latifah played the role of conversation-starter, and Mrs. Obama was the most effectively charming and forthright in her answers, with the nearly-uncomfortable-looking Warren a close second. This dynamic was interesting, because obviously Obama has had years of public speaking and is generally flawless in front of an audience. Warren is a songwriter who is never onstage and works behind the scenes and isn’t used to being put on the spot to answer such rote softballs such as “What is your favorite record?” (Answer: Stevie Wonder’s Talking Book for Obama and pretty much all the Beatles stuff for Warren.)

All this by itself is fine, because there’s nothing wrong with a group of people getting together, having a casual conversation and answering some chill questions on easy topics. But I was looking forward to a serious discussion of the Let Girls Learn initiative, and less than halfway in it was clear this wasn’t gonna happen. To be sure, there were many uplifting and inspiring things said by all the panelists, but none of them were earthshaking or anything that someone else hasn’t said before. Those interested in the most quote-worthy moments only have to troll Twitter and search for #flotus, #letgirlslearn and #62milliongirls. They’re all there, endlessly and breathlessly retweeted across the globe by the thousands. 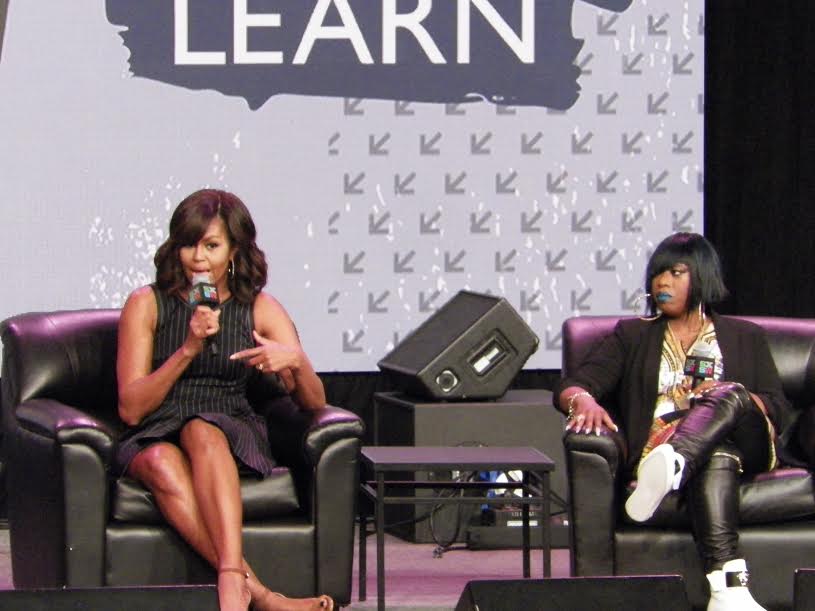 Free of context and expectation, they’re wonderfully specific. To wit: “Whenever you remove a woman’s voice from anything, you are lacking,” said Queen Latifah. “Imagine raising your daughter in a part of the world where they can’t get an education,” said Michelle Obama. “We reach better answers when we have a wide array of voices at the table.” Michelle Obama. “Listen to a woman you care about. Help tell her story.” Sophia Bush. “As artists, we have a voice… when God blesses you with the talent to speak, you need to share that wisdom.” Missy Elliott.

That final quote pretty much nails the irony of this whole panel. This was the premier gathering of powerful women at SXSW this year. They each have essential, unique voices that deserve to be heard, propagated and understood. And this was fine entertainment. A veritable full-stage-cult-of-personality. But precious little wisdom was imparted. I was hungry to learn, and left the same way.

The informational postcards regarding Let Girls Learn and #62MillionGirls placed on each seat for attendees to take and use to look up more information were piled on the floor, left in seats and basically ignored. For all the social media hosannas sung loudly about how incredible this event was, the paper left behind told a louder story. Thousands of people would be able to walk out into the Austin sunshine feeling like they’d just done something important because they woke up early, waited in line and saw the First Lady in person. They’d heard a glossy, somewhat squishy panel discuss important topics at a barely introductory level and learned what everyone’s favorite records were. They left thinking, “Wow, they’re just kinda like me.” And that’s true. They are just kinda like us.

But this event should have been more about those who aren’t like us, and for all the actual dirt-under-the-nails work this effort requires, it all felt reduced to a hashtag. I tweeted this out right after leaving the event:

#disappointed
This is not as good as I’d hoped. Thought there’d be more actual discussion about the #62MillionGirls innitiative. #sxsw16

It was liked immediately by the AOL Makers studio—the same group that brought us “This Is For My Girls.”

SXSW in Photos: Peaches, MSTRKRFT, The Blind Shake, and More