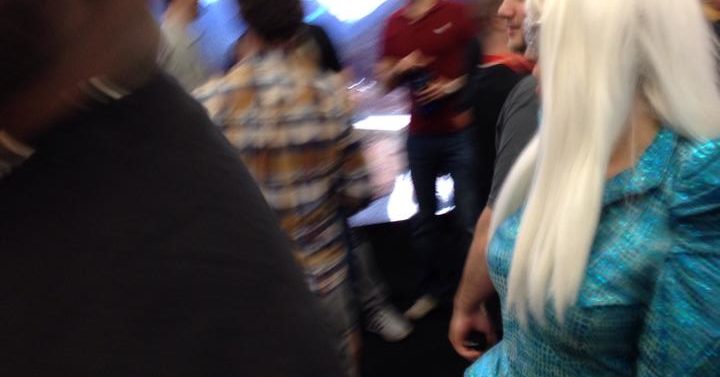 I’ve never been much of an audio gearhead. Couldn’t tell you the first bit of difference between mp3 files, FLAC, OOG, whatever. All of which just shows what a compelling and strong personality Neil Young is. Of course I’ve been a Young fan for as long as I can remember, and when he hit the stage and started speaking about room echo, warmth and full body reactions to one’s favorite records, I knew exactly what he meant.

Even so, I still don’t really understand Pono. That’s mainly what he spoke about. And while it was cool to be a mere four feet from the most American Canadian ever, it was much cooler listening to him speak passionately about respecting artists’ intentions by faithfully reproducing their recordings. I may not really understand how it does this, but Young certainly does, and the level of respect he gained when he spoke of the non-proprietary concept and said, “Look, we may be successful or we might fail, but either way, music wins,” was evident by the ample applause from the crowded room.

Anyway, that’s how SXSW 2014 started for your humble correspondent.

If you keep up with any of the national press, they probably have you convinced that the semi-private 30th anniversary Def Jam show at Stubb’s—complete with Method Man, Redman, 2 Chainz, Schoolboy Q, et al—was the place top be last night. Hell, Bieber and Gaga were there, even. (Cool side note: Lady Gaga popped ’round two doors down to check out the K-Pop showcase and it wasn’t very conspicuous at all. She said hello to a few people, but didn’t cause a scene or anything. I couldn’t even snap a paparazzi shot in time to make her love me [get it?])

I didn’t even try to get in, because I’m not generally a gate crasher; it was limited to those with SXSW platinum, interactive or VIP badges; and because I was able to hear it all from only about 20 feet away and not have to be in the middle of a drunken crowd of white folks who still think having a dude rap the N-word at a thousand decibels over and over is “edgy” and “street.” I’ve met legitimate hardcore racists who use it less.

(Nope. Lemme stop you right there. Talk all you want about linguistic reclamation and power dissolution and whatever else you learned in grad school. Even when that’s a factor—which I’ll concede it sometimes is—nearly every time it’s used lyrically it’s just a word crutch that evokes no sense of coded language at all. It’s just boring.)

In other news, if you dig blurrily melodic, post-shoegaze rock and roll, you could do a whole lot worse than Lafayette, IL band Brass Bed.

Today we head to the Hype Hotel (presented by blog aggregator Hype Machine), the always cool greatly curated Fader Fort by Converse (The Fader and Converse shoes, of course) and if the good Lord’s willing and the creek don’t rise, we’ll get ourself into the most coveted of all SXSW unofficial events: The Illmore (presented by New York’s impeccable illRoots).

SXSW in Review: The Autumn Defense