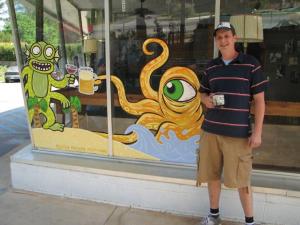 Representatives for Hendershot’s Coffee Bar and local pizza restaurant Transmetropolitan have been unable to agree on the terms of a lease renewal for the Hendershot’s space, and the coffee bar/music venue plans to vacate its current location before a temporary six-month lease is up June 30.

The adjacent properties, on Oglethorpe Ave. near the Forest Heights neighborhood, are both owned by the local Tweedell & Van Buren Oil Company, but Transmet controls the Hendershot’s sublease, which is at the end of its term.

According to Transmet owner Brian Colantuno, the dispute over a new lease stems from two issues: which business will control the lot’s parking spaces, and an imminent increase in rent price.

“The rent was the biggest issue,” Colantuno says, alleging that Transmet’s insistance that Hendershot’s pay what the former considered an appropriate share of the property owner’s overall increase was met with resistance. Colantuno says Transmet even offered to pay half the coffee shop’s increase for the remainder of a yearlong agreement, a proposal to which lawyers representing Hendershot’s initially agreed, but then rejected.

Colantuno also says the venue rejected several versions of an agreement because it stipulated parking spaces were to remain available to anyone visiting either business. Instead, Hendershot’s wanted each of the lot’s few spaces to be designated for one or the other.

As Hendershot’s owner Seth Hendershot explains it, he and his business partners initially approached the property owner to ask about the possibility of being added to the lease—”not really an unreasonable thing,” he says, insisting he wasn’t trying to undermine Colantuno.

But the property owner decided to let Transmet retain control of the lease, and when the pizza restaurant got word of Hendershot’s attempt to wrestle away its portion, negotiations soured.

Hendershot says his venue, an intimate and low-key place known for hosting residencies from the likes of Ike Stubblefield and Kenosha Kid, was willing to pay its share of the rent increase, but he admits the negotiating process got away from him when it landed in the hands of his business partners’ lawyers, who took a hard-line approach without Hendershot’s approval. Negotiations ultimately failed, he says, when lawyers representing the coffee bar handed Transmet an “ultimatum” letter demanding that it agree to a specific rent amount.

When Hendershot learned of the letter, he rushed to Colantuno and urged him to forget it, saying his venue would pay what Transmet asked. Colantuno agreed to renegotiate, Hendershot says. “We agreed it was stupid, and we should put the gloves back on.”

But soon after, Hendershot’s received a letter from Transmet’s lawyers instructing the venue to vacate the location by June 30.

Transmet gave no reason for the about-face, Hendershot says, though he has heard “Wes [Russo, Transmet co-owner] has [another] idea of what he wants to do with the building.”

Regardless of their disagreement, both Hendershot and Colantuno agree that the particular location benefits from the presence of both businesses. “We don’t want to give up on the community,” says Hendershot, noting that he is in the process of looking for a nearby space. And though it seems almost certain that a last-minute deal will not be reached, both owners express regret over the way things have been handled.

“I love Brian,” Hendershot says. “I’ve got a lot of respect for him, and I don’t want to villainize him.”

Colantuno, too, notes that he and Hendershot are friends who have always been supportive of each other’s endeavors. He will miss his neighbor, he says.

“I live in the neighborhood,” he says. “It’s nice to have a coffee shop there.”