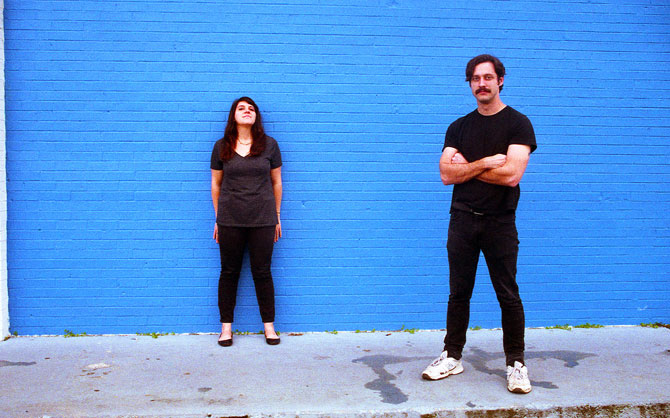 MARKS THE SPOT: The new full-length from Eureka California won’t be out until we’re deep into March, but the first single is available for streaming, and it’s a gol’ darned smoker! The album is named Versus, and the song is “Sign My Name With an X.” It’s got a howl of a feedback-y guitar riff opening it up, and within two minutes, it compresses the urgency of Hüsker Dü into the slack appeal of Dinosaur Jr. and churns itself out as a pop gem. The record was recorded in Leeds, UK with engineer MJ—yep, just MJ—from the band Hookworms at his Suburban Home studio. It’ll be released via HHBTM Records, and you can check out the single on Homedrone.

UP ALL NIGHT: Eureka California’s Jake Ward and Marie Uhler, along with HHBTM head Mike Turner, are now promoting shows under the name Public Access. To start things off, they’re hosting a doubleheader Friday, Feb. 12 with an early show and a late show. The early one is at Flicker Theatre & Bar at 9 p.m. with Bee Terror Thing, which is Brigette Adair Herron of Tunabunny playing “intellectual skronk”; Trumansburg, NY songwriter Isabel “Izzy” Reidy playing under the name Izzy True; and Signal Mountain, which is Uhler along with Lydia Brambila (Outer Sea, et al) as a guitar and keyboard duo. The late show starts at 11 p.m. sharp and is at Little Kings Shuffle Club. It’ll feature Eureka California proper, Asheville, NC’s Minorcan and local dudes Wieuca.

GET SOME MORE: With their new full-length Sawce still hot out of the studio, Team SS—Justin “Loyal” Smith and Keefie “3ft” Johnson—just released an additional EP. It functions quite well as an addendum to the album, and they’ve titled it, appropriately enough, Extra Sawce. The eight tracks are harder hitting, with more bass-heavy beats and aggressive vocals. Guest feature appearances from Yung Cuz and Duddy Ken help solidify the pair’s dedication to Classic City hip hop while still cutting their own style. Check it out at teamsawce.bandcamp.com. In a bit of parallel news, Johnson is working on the follow-up to his I Am Derrick that came out last spring. He’s also got a pretty good YouTube channel going, with lots of music and inspirational talks, including a touching documentary titled The After Derrick Story, in which he covers what life has been like since the loss of his brother, Derrick Johnson. It’s worth every minute. Listen in and take a peep over at youtube.com/3DaGhost.

LESS IS MARR: Longtime singer-songwriter, man about town and former Flagpole City Editor Dave Marr has a surprise for those who catch his opening set for Drive-By Truckers this Friday, Feb. 12. He’s completed the new album he hinted at last year, and it’s named We Were All In Love. He’ll have CD copies available at the show. Although he says he might put some copies over at Wuxtry Records, he’s really not planning on releasing it much further without label interest and support. And, really, who could blame him? I’m among the lucky ones who got an advance copy, and it’s honestly the best collection of songs I’ve ever heard from Marr. I’ll stand on top of the Star Room Boys’ coffee table in cowboy boots and say that, too. His voice, especially, which had a compelling earnestness—and thus boyishness—when he led the Boys, has matured and deepened over the past 20-odd years into a rich and honeyed well. I don’t feel like I’m being sung at, but being sung near. Plus, the songs on this new record are simply top-notch and are cross-bred masterfully between country, 1970s pop and classic college guitar-rock. There’s only a couple that didn’t land with me, but there’s no sense naming them, because you’ve no idea what any of these songs are called yet! Keep up with all things Marr over at davemarrmusic.com.

GET OUTTA TOWN: About 10 miles east of Athens lies the tiny town of Arnoldsville, and inside that town lays No. 3 Railroad Street. The building has served in the past as a post office and grocery store but was recently restored by Mary Nouri. She’s been running the space as a community center with lots of different activities during the day, but is looking to open it up to musicians at night. To this end, there are a few shows already planned. First up is Southern rock hero Tommy Talton, whose resume is too long to write here but includes several years on Capricorn Records (during the good years!) and as an in-demand session player for multiple legends, as well as being in Greg Allman’s touring and recording band. He’s playing this Saturday, Feb. 13. Athens music fans will find this space a little different than our downtown venues. There’s no liquor license, and the feeling I get from seeing photos of it is almost like a bed and breakfast, but without either of those. I’m looking forward to visiting soon. Check them out via facebook.com/No.3RailroadStreet and 3railroad.org.