Saturday Is the Last Farmers Market at the West Broad School 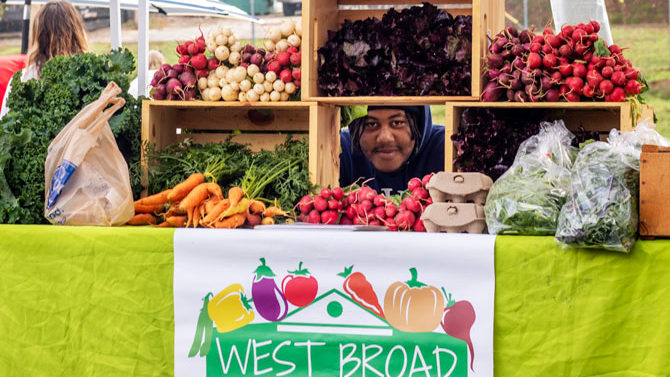 After nearly seven years serving as a lively community and education center in an aging and neglected corner of Athens, the West Broad Farmers Market will sell its last produce, prepared meals and baked goods at the site this Saturday, Dec. 14, while the Athens Land Trust prepares to move the market to a new, as yet unidentified location.

The Clarke County Board of Education, at Superintendent Demond Means’ urging, voted in September to repurpose the old West Broad School site, which dates back to the days of racial segregation and hasn’t served as a school since 2008, to build a new early learning center for 2, 3 and 4 year olds. A portion of the school will be preserved and converted into a health clinic and an office for students to fill out job and college applications. Although the land trust had offered to lease and renovate the site itself, CCSD’s plans do not include space for the ALT’s community garden, farmers market or other programs.

Launched by the land trust in 2013, the market has served the neighborhood and beyond as far more than a Saturday morning place to shop for food. Hundreds of local gardeners also developed a half-acre produce garden, building raised beds and planting vegetables and herbs for sale at the market. More than 200 Athens middle and high school students have taken advantage of the Young Builders and Young Farmers training programs that sprouted from the market, learning valuable trades that for some have led to promising careers.

While many of the market’s vendors will miss the neighborhood feel of the setting and the garden’s fertile soils built up by volunteers’ hard work over the years, the vendors are looking forward to the promise of moving the market to the new site. ALT Executive Director Heather Benham says she hopes the new market, which should open in spring 2020, will boast a new, commercially licensed kitchen that will give vendors the opportunity to prepare foods they can sell to restaurants and supermarkets, an important step that has the potential to boost their sales dramatically.

The move has stirred some controversy within the community, and some market supporters question the school district’s motives. Athens-Clarke County Commissioner Melissa Link fears the site will revert to a vacant lot and asked rhetorically, “What’s the hurry? The school district hasn’t done a traffic study or operational plan.”

Meanwhile, the ACC commission voted unanimously last December to support the market with a $2.9 million infusion originally intended for the ALT to redevelop the existing West Broad site in partnership with the school district. With the September school board vote to redevelop the site without accommodating the market, those funds instead will be used by the ALT to buy land and build the new facility.

Vendors at the market seem to be enthusiastic about the prospect of these changes. “I can’t wait ’til the commercial kitchen gets here,” says Willa Fambrough, owner of Icookie_4u, a bakery and catering company. “This will enable me to package my cakes and sell them at Earth Fare.”

Ethel Collins, the 82-year-old owner of natural foods caterer Soul Food With a Twist and one of the market’s original vendors, is also eager to take advantage of the commercial kitchen. “Ms. Ethel” is one of the market’s most vocal advocates of adopting a diet rich in vegetables, telling Flagpole five years ago that she believes changing her diet helped her overcome leukemia. “When are we going?” she asked about the new location.

Ty Jeffries, who worked in the Young Urban Farmers program and has since taken a job with a local landscaper, credits the program with helping him learn a trade. Perhaps more importantly, he says he “learned a lot about entrepreneurship,” and that the program “creates a career path for students.”

Benham won’t disclose the location of the new site, since the agreement isn’t yet final, but she did mention that it’s “within walking distance” of the current site, off West Broad Street between Minor and Paris streets.