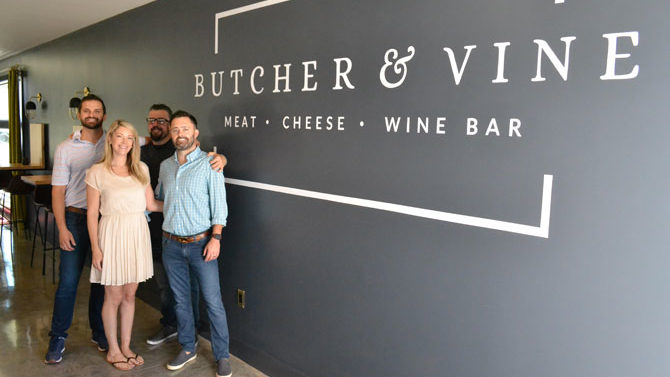 CHEESE AND CHARCUTERIE: Butcher & Vine (37 Greensboro Highway, Watkinsville) is a new purveyor of meats, cheeses and seafood. Set in a comfortable space with abundant natural light that feels like a large living room, Butcher & Vine blends a butcher shop and wine store with a charcuterie delicatessen that serves up salami, prosciutto and other cured meats with cheeses and house-made chutney and hummus on wooden tasting boards.

The idea for the venture arose when, during a vacation in Tuscany, Justin and Jennifer Barnette observed customers at a high-end butcher shop sitting at tables sampling specialty charcuterie and drinking wine. A light bulb flashed for the couple: What if they created a similar comfortable setting back home in Watkinsville? When they returned to Georgia, the Barnettes shared their concept with Chops and Hops owner Andrew Wallace and discovered he was entertaining a similar idea, soon giving birth to the partnership that became Butcher & Vine.

The new partners recruited Chops and Hops executive chef and local foods enthusiast Josh Aaron, who set to work finding sources of fine locally and globally sourced meats and cheeses, whipping up housemade accompaniments like cashew cheese and peach chutney and developing themes for his boards, such as “Old Country” and “The Carnivore.” Coming in sizes that serve from one to four, Aaron arranges these boards with the care of an artist to combine a variety of tastes, highlighting each with brightly colored, pickled vegetables. The cauliflower adds a brilliant burst of yellow. Aaron has even created a vegetarian board called “The Herbivore.”

Aaron’s Georgia suppliers include Hobo Cheese, a microcreamery that creates small-batch, handmade cheeses. Much of the pork comes from Hamthropology, a Milledgeville “hoggery” raising endangered Ossabaw Island pigs that, according to the company’s website, are descended from Spanish pigs sometimes called “four-legged olive trees” for their heart-healthy oleic acid fat. Boards start at $12 and go up to $32 to serve three or four. Much of the charcuterie comes from Heywood’s Provision Company in Marietta.

Other local products that appear on Aaron’s boards include the bright acid flavors from Phickles’ pickled okra and other vegetables to complement the supple fats. Kiki’s Bakeshop, a Watkinsville neighbor, contributes lemon bars, cheesecake brownies and other treats for dessert. Even the signature charcuterie boards are locally made by Walls Woodworks.

Butcher & Vine’s boutique butcher shop features local beef from Pastures of Rose Creek and Eden Pure ranches and will highlight other local beef producers regularly. These local producers raise healthy grass-fed cows that are never fed corn, and their beef is lower in calories and rich in Omega 3 fatty acids. Fresh, minimally processed scallops and salmon delivered fresh most days round out the offerings at the butcher counter located near the rear entrance.

The company also sells selected small-batch wines that customers won’t see on the shelves at grocery stores. Bottles are arrayed with helpful remarks to help guide purchases and are priced around $9–$12 per glass and up to $100-plus per bottle. Beers from Southern Brewing Company and Creature Comforts are also available.

The medium-roast coffee is designed to be a people-pleasing blend that Mustard says is made up of Guatemala Huehuetenango with Brazilian Cerrado beans. Jittery Joe’s will market the blend alongside its other specialty “partnership” blends, including Alternative Fuel, the sales of which benefit BikeAthens.

The project allows local groups and organizations to include coffee sales as part of their fundraising strategies. Mustard suggests the groups might sell the product to supporters as a regular subscription. Jittery Joe’s will also make the coffee available at Kroger and other retailers, contributing 50 cents from the sale of each bag to AthFest Educates.

“The Jittery Joe’s team has been amazing about sharing their vision with us, and their support will enable us to expand our grant-making into high schools,” says AthFest Educates Executive Director Jill Helme.

“It makes sense for local fundraisers to sell a widely consumed product like coffee on a continual basis,” Mustard says. “AthFest Educates already makes a great impact on the community, and what we will do with Create coffee is very exciting to me.”