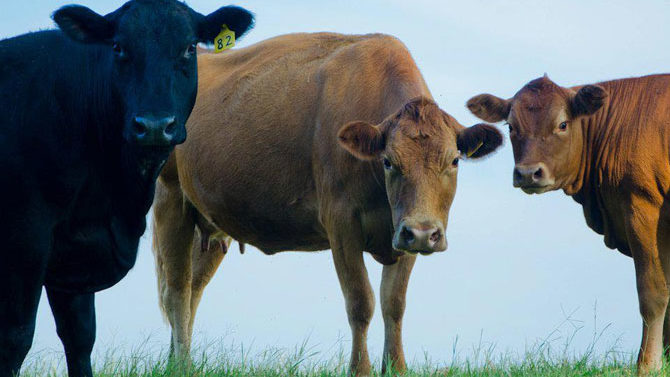 Is there any other part of the American diet that is as suspect as beef?

The list of concerns is long: Saturated fat blamed for heart disease and cancer. Artery-clogging cholesterol. Inhumane treatment of animals. The use of corn, antibiotics and hormones to fatten the cows quickly to enhance profits. The environmental costs. The corn feed alone gobbles up enormous amounts of oil just for fertilizers.

Athens-area beef ranchers say their locally raised beef is a more environmentally and nutritionally sound option for lovers of steaks and burgers. Their cows eat clover and Bermuda, rye and fescue grass that grows readily in the deep-green, self-fertilized grazing fields. Simply put, grass-fed beef sidesteps most of the problems presented by corn-fed beef, and local consumers are willing to pay a significant premium.

One of the principal advantages of purchasing food locally is that customers and producers build relationships of trust. While the ranchers surveyed have not submitted to the costly and lengthy process of obtaining the designation “organic,” they instead simply inform their customers of the details involved in the “responsible” way they raise their cattle.

The three nearby cattle ranchers described in this story sell beef that has been raised on their own farms under their own direct supervision, and assure customers that their purchases come from entirely grass-fed cattle free of the hormones and antibiotics that are common to supermarket beef.

Powers currently has 40 “mamas” and 38 “babies” that he grazes on his fields. “I pay close attention to the microbiology of my pasture,” he says, adding that “there are hundreds of micronutrients that go into the field… It makes a difference. If the cow is eating healthy grass, and we eat a healthier cow, it’s better for you. It’s kind of a circle.”

The herd is sired by two powerful Piedmontese bulls that live on the farm, resulting in beef that studies suggest is consistently lower in calories, saturated fat and cholesterol. Prices range from $6 a pound for cube steak to $24 a pound for filet mignon. Powers’ favorite beef dish? “Braised short ribs.”

Powers also raises dozens of Rhode Island Red chickens for their eggs, which he sells alongside his beef at farmers markets.

Emmet Cabaniss runs Falling Creek Farms in Stevens, about 20 miles southeast of Athens, and seems as much missionary as farmer. Over the 20 years he has raised his herd, he has developed a devoted following of customers who come to him for what he calls “clean protein.”   His website quotes the Greek physician Hippocrates: “Let thy food be thy medicine, and thy medicine be thy food.”

Falling Creek maintains a “closed herd” so the cattle don’t have to be vaccinated. Cabaniss says his cattle simply eat hay and a special blend of minerals that helps the cows ward off disease and discourages parasites.

Cabaniss says one regular customer eats no other protein but beef from Falling Creek due to allergies, and he promotes a return to a pre-modern diet that’s free of chemicals and additives. “I have customers with cancer, eczema [and] gastrointestinal issues” who purchase Falling Creek beef for health benefits including heart-healthy omega-3s and iron, he says, and he believes good quality grass-fed beef won’t cause the gastrointestinal problems brought about by supermarket meat.

Don’t look for Falling Creek beef at farmers markets, since Cabaniss says his typical buyers are not “farmers-market-type customers.” Instead, he will make deliveries to regular customers, mostly in Atlanta. Their friends, drawn by word-of-mouth recommendations, will come at the appointed hour to purchase enough beef to fill their freezers. Cabaniss makes deliveries to restaurants (Five and Ten, The Falls) and some regular customers in Athens as well. He sells boxed assortments of beef or individual items for $10–$24 per pound.

Cabaniss’ favorite beef dish? “Sous vide a New York strip for two hours at 130–140 degrees.  Then sear in avocado oil for two minutes per side at high heat. Baste with rosemary and butter or ghee.”

The small Madison-based farm The Boy and the Dog was started by Elie Adams, a UGA counselor, in 2015, and raises premium Wagyu cattle originally bred by Japanese geneticists for their tenderness and intense flavor. An avid equestrian, Adams says she bought the farm with her mother for her horses and for conservation purposes, and since she loves to cook, she decided to raise high-end cattle as well. Adams also speaks of wanting to introduce young people to farming.

All beef raised by Adams is rated “Prime” by her USDA-inspected processor, and The Boy and the Dog beef has been served at local restaurants such as The National, Marker 7 and LRG Provisions. Adams also sells directly to her customers at the West Broad Farmers Market and the Harmony Crossing market in Eatonton, and her beef ranges in price from $10 for ground beef to $32 for filet mignon.

Adams pulls no punches when describing the value of locally raised, grass-fed beef, saying that consumers are “funding animal abuse when they buy feedlot meat.” She adds that she sees a bright future for farmers markets and local producers as demand increases among millenials.