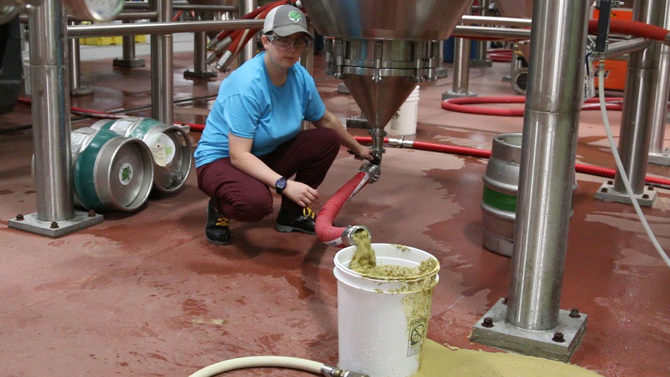 When you think about craft beer—about the hands that mix together grains, water, yeast and hops coaxing out the subtle flavors of a pale ale or a stout—whose hands are you imagining? Chances are you’re thinking about a guy with a beard.

The beer industry has historically been dominated by men, and the craft beer industry is no different. But women are increasingly taking on a larger part of the craft brewing industry. According to a recent poll conducted by Auburn University, women account for 29 percent of brewery workers in the United States.

Roth co-owns the brewery with his buddy Rick Goddard, but his wife Jen Roth is also involved. In the early stages of SBC, Roth helped her husband with anything from mopping the floors to running the register to budgeting for the brewery. Today you can find her working behind the scenes to make sure everything runs smoothly. “We wouldn’t be open if it wasn’t for five women—Jen included,” Roth says.

Still, women are still underrepresented as head brewers. In 2014, Stanford University surveyed 1,700 active breweries and found that only 4 percent of them had a female head brewer.

In the early days of beer, women were uniquely tasked with brewing and serving beer to their families and communities. Over 4,000 years ago in ancient Egypt, women were the first beer merchants. When North America was first colonized in the late 1400s, as with other domestic roles related to cooking, beer was a woman’s domain.

It wasn’t until the Industrial Revolution in the 1800s when selling beer became an industry that men began to take notice—and control—of. As soon as brewing became a business, it turned into a boy’s club.

Today, women’s role in brewing is changing again. Roth thinks there are women in the craft beer scene who are making great strides. “I could point out many women in the industry doing incredible things and changing the industry in really incredible ways,” says Roth, “but you don’t see it as much in the South.”

Jess Hurd is the exception. The only female brewer in Athens began working at Terrapin Beer Co. nine months ago, where she handles everything from milling grain to adding hops and other ingredients to boiling wort to cleaning tanks.

Hurd thinks women are easing back into the industry, but some are still intimidated by the rough culture and masculine stereotypes that surround brewing. “People don’t think that they could get used to that type of intensive physical labor,” says Hurd. “That was a big thing I was worried about when I started applying.”

Yet once she started the job, Hurd realized that lugging around equipment and heavy buckets of water or other beer ingredients was one of the things she liked most about brewing. “I think a lot of people are stronger than they think they are,” she says. Hurd has been brewing professionally for two years, and although she admits the work is hard, it’s rewarding.

The biggest hurdle for women getting involved in craft brewing, say Hurd and Roth, is exposure. “I think women’s presence is going to increase over time as more people dip their toes into the waters and figure out this industry is really rewarding,” Hurd says. “You’re making something that people love.”

Shortly after she began working at Terrapin, Hurd visited a local bar and asked the server to suggest a beer. “She recommended a Terrapin beer,” Hurd says. “It was the coolest thing to experience! Like, ‘Oh! I could have made that.’ That sort of feeling can be kind of addicting.”