Hot Food at Stripling’s, Chinese Duck at Fooks and a Trip to Birmingham 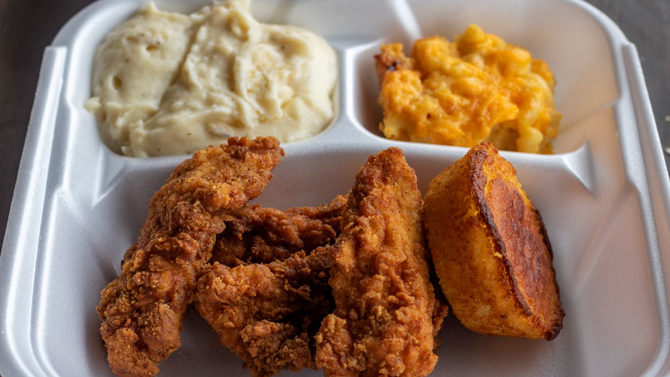 FULL UP: There is very little that gets me to a restaurant faster than hearing it is in a gas station. Some people think that’s gross. I feel like the results speak for themselves. The rent tends to be lower and the creature comforts likewise. The food isn’t fancy, but it often exceeds expectations as a result. A friend of mine told me recently that Stripling’s General Store (4501 Monroe Hwy., in Bogart, 770-725-7772) was a somewhat regular stop for her due to its hot bar, and I jumped at the opportunity to check it out. The idea was to hit up T’s Corner, just across Highway 78, also attached to a gas station, and compare the two, but a sign on the door there says the deli is closed until further notice.

I went to and wrote about Stripling’s when it first opened, but I experienced it more as a store and less as an eatery. It’s still more of the former, although it does indeed have a gas station attached. There’s nowhere to sit and eat, which means a lot of folks are sitting in the parking lot eating out of a Styrofoam container with a plastic fork. That said, there’s a surprising amount of variety in the offerings, which change daily. Nothing is made to order, but on any given day you could get yourself some fried chicken (fine, but suffering a bit from hanging out under the heat lamp), fried okra, a bunch of other fried stuff that I avoided because I figured it might not be that good, meatloaf, something called “goulash” that is more of a meat/noodles/cheese/vegetable casserole than a stew (not bad!), black-eyed peas, sautéed broccoli, baked macaroni and cheese (also somewhat of a thumbs up), under-seasoned butter beans, OK collard greens, mashed potatoes and more.

Everything is priced by the pound, which can make it seem pricey, but the result is a pretty good deal, especially if you also grab half a smoked chicken, which will run you a bit over $4 but is flavorful and can easily turn one meal into two. There are biscuits and sausages and barbecue, too, as well as a whole bunch of mini casseroles, soups and things in cold cases that include pre-made sandwiches. If you really want a chicken salad sandwich, you can get one, but you could do better elsewhere, as the central component of this lunch item is both a bit too smooth and too sugary.

There are also multiple kinds of pimento cheese and some very tasty “spicy guacamole” crackers (saltines with some intense flavor dust that is not real avocado-ey but is real nommable), as well as all the usual stuff you can get from Stripling’s: jerky, a kajillion kinds of pickles, Hoosier Girl cake by the slice, wilded-out Rice Krispie treats, hoop cheese by the small or big hunk, old-fashioned candy and so on. Stripling’s is open 6 a.m.–8 p.m. Monday through Saturday and noon to 6 p.m. Sunday. (The hot bar isn’t available Sundays.) Weekly specials are chalked up by the door and available on the store’s Facebook page if you click “menu.”

DUCK, DUCK: I have known about the Chinese roast duck available from Fooks Foods (2026 S. Milledge Ave., 706-208-8839) for 12 years, but hadn’t actually ordered it until quite recently. The logistics never seemed to work out. I was a dummy. It’s worth some effort. Fooks takes orders in the store, and the duck comes in every two weeks, on a Friday. You can order a half or a whole, and although the latter is a bit over $20, it is worth it. If you are likely to be freaked out by the fact that it definitely still looks quite a bit like a duck, you might want to skip it, but then you’d miss out on its salty, fatty, meaty goodness. It comes with zero sides, so either plan to make some rice and vegetables yourself or take your chances with the prepared foods shelf at Fooks, which is reliably tasty but might very well be cleared out when you pick up the duck.

ROAD TRIP: If you should find yourself in Birmingham, AL, Woodlawn Cycle Cafe (5530 1st Ave. S, 205-224-4011) is 100 percent worth your time. Open from 7 a.m.–3 p.m. every day, it could fairly be described as a hipster coffee shop, complete with a shelf on which the LP currently playing is displayed. It also has some incredibly delicious food, much of which is vegetarian and all of which is made from beautiful, fresh ingredients. Even a minimalist plate of toasted sourdough bread with olive oil, salt and pepper will wake up your mouth and let you know what you’re in for. Anything with greens or eggs (a big chunk of the menu) is intense, well seasoned, impressive and on point. The kitchen isn’t afraid of salt, but it also knows how to glow up simple ingredients to let them become almost luminescent in flavor. You can also bring your kids. The space is neat and modern but loud enough to drown out even rambunctious small ones. If it were in Athens, I’d go a bunch.