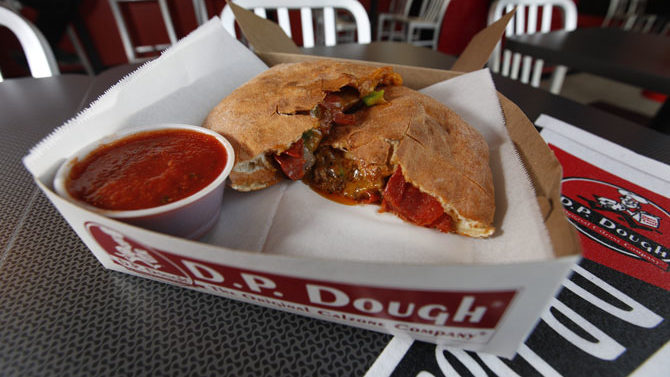 IN THE ‘ZONE: Now that Athens is home to not just one but two late-night-focused calzone franchises that offer delivery and, basically, the exact same menu, the time seemed right to evaluate the foodstuff itself. Is it a handy, more portable way to eat pizza, an idea whose time has come, in an era when Taco Bell advertises its Grilled Stuft Nacho [sic] as an easier alternative to the classic platter of chips, cheese, etc.? Is it really so damn difficult to use both your hands to eat these days? Are the youngs too busy thumbing their way through Tinder to eat with left and right hand at the same time? What, existentially, is the point of a calzone other than its relative ease of transport? (Leslie Knope’s point about it being “pizza that’s harder to eat” is 180 degrees from reality.) Does it improve on pizza in any real way?

D.P. Dough (180 W. Broad St., 706-842-2828) opened its first Athens location a few weeks back on the ground floor of the Georgia Heights building, and although it claims on its website that “calzones are way better [than pizza],” I’m not sure it makes that case, either in print or in action. Then again, it’s hardly alone in that.

The main problem I see, having stuffed my face with bread and cheese and various fillings from a number of Athens restaurants for days in a row, is that either the crust is actually good, in which case it fails to contain the fillings adequately, or it is a sort of bland, fat thing that serves only as an envelope and not as anything worth consuming on its own but does hold up to the job. There is no magical in-between place where both goals are achieved. If your preference for pizza is shaped by toppings, you will want the latter, enabling maximum fillings, and if you are more of a purist, you will want the former. Athens has no places that serve both pizza and calzones where the pizza is not far superior to its pocketed little brother.

Ted’s Most Best can make any pizza into a calzone for a slight upcharge, and its little container of tomato sauce for dunking is thin and lovely, not aggressively studded with bitter circles of dried red pepper. But a calzone that requires a knife and fork to eat without completely falling apart is not really a calzone. Little Italy makes an enormous, doughy three-cheese calzone that is a marvel of blandness, considerably inferior to its classic slices of pizza and awesome monster sandwiches. Automatic Pizza does a pretty good job marrying high-quality fillings to a crust dusted with parmesan, meaning flavor inside and out, but the calzone still tends to droop and, again, pales in comparison to its excellent pizza.

D.P. Dough, with more than two dozen locations concentrated in college towns, has mastered the art of keeping its fillings inside its crust, and when those fillings are strongly flavored, as with the Buffer Zone (breaded chicken, hot sauce, blue cheese and mozzarella, all of which meld into a sort of orange goop), the balance works pretty well. Like its competitor over on Clayton Street, Eddie’s Calzones, it makes tater tots, which can be topped with cheese and bacon, retails pints of ice cream and keeps late hours, closing no earlier than 2 a.m. on any night. You can “hook it up” and add flavors to the crust, which may be the way to go. Things run pretty smoothly, with an online ordering system should you hate talking to people, and (unlike Eddie’s) it has fountain sodas as well as ones in the bottle.

FOOD HALLS: Having now visited the Krog Street Market in Atlanta as well as Ponce City Market, I can say that the former seems like a better business model for Athens than the overly well-heeled latter. Word is that the Austrian owners of One Press Place downtown (formerly Morris Publishing Group’s temple to print journalism) have considered turning it into a similar sort of thing, and the location seems nearly ideal.

Krog Street Market offers an excellent beer selection and the ability to wander around with your drink once you purchase it, as well as Israeli cuisine (at Yalla, by Todd Ginsberg of The General Muir, which serves giant pickled caper berries that will blow your mind and the doors off your taste buds), an outpost of Jeni’s Splendid Ice Creams (the time is ripe for ice cream to come back to Athens), sandwiches, fresh produce, knick-knacks, izakaya (by Jey Oh, rumored to be collaborating on something in Athens), fancy hot dogs, BBQ, dumplings, beautiful pastries at The Little Tart and much more.

Families and hipsters crowd together in a somewhat chaotic but totally charming environment with lots of communal seating. The small size of the individual venues encourages focus and experimentation, and the ability to see what other people are eating increases curiosity on the part of customers. It’s food trucks with booze and (some) air conditioning—eating as entertainment that doesn’t preclude the eats being really good.