The Place and The Table Defy Nondescript Names With Tasty Food 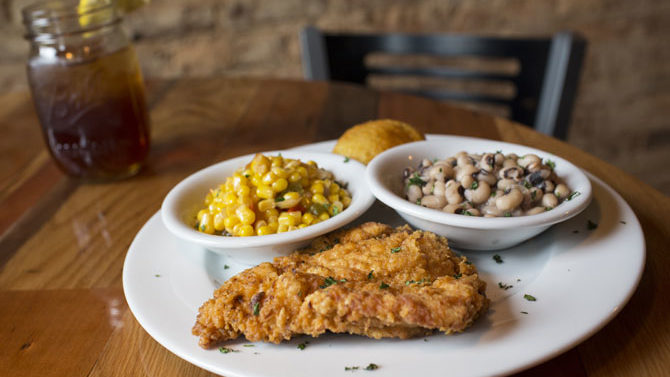 WHO’S ON FIRST?: Naming your restaurant The Place (229 E. Broad St., 706-850-2988) is kind of a coy move, even if it does refer to the car dealership that once belonged to the family of owners Ryan and Alan Pope. One can imagine an extended vaudeville routine of two friends trying to meet for dinner. But the generic name shouldn’t deter you, and neither should the fact that the restaurant describes its offerings as “refined Southern fare,” the kind of wording that is up there with “farm fresh” in the category of “things promised but rarely delivered.”

The former Five Star Day Cafe, at the heart of downtown Athens, is basically unrecognizable inside, with a makeover that shows the beauty of the historic space, adds a full bar and overflow seating upstairs and is full of clever touches to make use of limited square footage (and calling to mind the IKEA catalog’s suggestions for living in a tiny apartment). Doors slide rather than swing out. A dumbwaiter carries food from the kitchen to the second floor to reduce mileage on the servers’ legs. Seating is tucked here and there, and dang near all of it is filled.

The Popes have run several restaurants before, so it’s no surprise that they understand how to put together a menu, price appropriately and train their servers. Said menu has some callbacks to Five Star, including the corn muffins that come as a side with several items. Sometimes sweet (too sweet for me) and sometimes spicy, they’re an admitted work in progress. Lunch is more sandwich-oriented, with a daily meat special and a bunch of veggie sides. Dinner adds some entrees.

The kitchen doesn’t overseason its veggies or cook them to death. Black-eyed peas still have some texture and taste vegetal rather than simply of salt, with a faint, almost citrusy undertone. The collards, likewise, still have some chew. The Gouda mac and cheese is rather on the creamy side for a place boasting about its Southern cred, and the potato salad is no great shakes, but the mashed potatoes, with big soft chunks of onion incorporated, are nice.

The fried pork chop manages to feel on the healthy side, and the tuna melt is positively virtuous, served on a robust multigrain bread that doesn’t get soggy. On the other hand, the “melt” part is little in evidence. It’s more of a straight-up tuna salad sandwich. The shrimp burger is slightly greasier stuff, but manages to blend whole fried shrimp, cocktail sauce and coleslaw into a lovely series of crunchy, zippy bites. The Southern bruschetta (pimento cheese plus bacon and tomatoes on buttered, grilled bread) is a fine starter, all crunch, spice and cold tomato.

There’s a good beer selection, with previous taps stored behind the bar upstairs, brunch in the works and an emphasis on service. The Place is open for lunch and dinner every day and has a full bar.

MONIKERS, PT. 2: The Table (1075 Baxter St., 706-395-6599) has a hidden location on Baxter (in the modern loft building) to overcome as well as a completely generic name, but this restaurant, too, is making smart use of a small space and focusing on restraint. The open kitchen allows you to see three people hard at work assembling prettily plated dishes that mostly make use of fresh vegetables and delicate seasonings.

The yuzu miso salad has nothing particularly fancy in it (no farms are identified on the menu), but the ingredients are treated with care and well dressed. Connie’s Cilacama Black Bean Wrap, a combination of black beans, cilantro, jicama, apple and low-fat yogurt aioli wrapped in a circle of naan, is an advertisement for vegetarianism and, in fact, a better combination than the Edison’s chicken (coconut-buttermilk fried chicken breast with pickled beets, curry and lemon) or the Southern Chick’n Makeover (stuffed with spinach and Brie, wrapped in bacon, pan-roasted), which are both good but rather on the sweet side.

Kabocha squash makes many an appearance (sometimes referred to as “squash casserole,” which it ain’t), including in a pure and delicious vegetable soup that lets its components display their essential nature. The crab meat-stuffed portobello mushroom with lobster sauce is similarly straightforward and light, not heavy and gross. The roasted garlic herb potatoes, the kind of side that most restaurants dump right out of a package, are great.

The Creole shrimp and grits is surprisingly well executed, and although the spicy Asian chili pasta isn’t kidding about its level of heat, the bright-red noodles are perfectly cooked, and the flavors of the dish keep one coming back. The menu is broadly cross-cultural (in a way that makes one nervous but ends up being a bonus), well priced and more than accommodating of dietary restrictions and preferences.

A few tables inside and out bear fresh flowers and salt shakers lovingly hand-labeled “sea salt,” but take-out is a big part of the business, too. The Table is open for lunch and dinner Monday through Saturday, closing from 2–5 p.m. It has no bar but is totally worth your time.