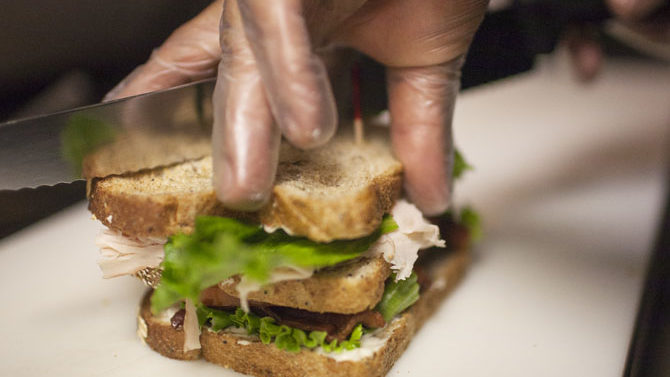 FAMILY: Apart from a brief mention on the Grub Notes blog on Flagpole’s website when it opened, you wouldn’t really know BIG Family Cafe existed, but you should. The restaurant took over the space in Homewood Hills that was most recently occupied by The Camp (Glenda Brown, meanwhile, is looking for another location where she can ply her trade), but despite a good location, a well-executed menu and a super-nice family who run the place, it might as well be invisible.

Let this serve as a wider notice that Big Family Cafe is there, and it is often delightful. The weird, long, narrow space, which doesn’t have much in the way of atmosphere, will never be spectacular, but new booths make it cozier, a paint job has brightened things up and a couple of flatscreen TVs tend to be tuned to Classic Arts Showcase. BIG Family Cafe only operates from 7 a.m.–3 p.m., but it does so every day and makes an especially great spot for weekend breakfast.

The menu is large and focused on American standards, executed with a slight California accent. For example, the Cajun Ortega burger comes topped with green chiles and Monterey Jack. The spices used to season it are described as “Cajun,” but they’re mild, and the burger comes on a wholewheat bun. It’s also totally pleasant, while feeling better for you than average. The burrito, too, seems very West Coast, filled with sauteed mushrooms, olives, green onions, bell peppers, salsa, your choice of beans and Jack cheese. It’s a big, healthy way to get a bunch of veggies and doesn’t need meat.

Most lunch options come with a side of chips and housemade pico de gallo, but you can also substitute the house home fries, cooked with finely diced mushrooms, bell peppers and green onions, then topped with salsa and Jack. Cobbler is always available, with different fruits featured depending on the day, and, unlike most places’, it actually tastes homemade, not overly sugary and doughy.

Breakfast is equally solid. The dill and artichoke three-egg omelet also includes tomatoes and is neither too fluffy nor too flat. The huevos rancheros are both light and hearty, topped with pinto or black beans, cheese, olives, avocado and a fairly spicy ranchero sauce. The veggie eggs Benedict includes avocado and tomato, and the hollandaise, once again, tastes like it was made only a few minutes prior, not poured from a gross container. Chocolate chip pancakes aren’t sloppy just because they’re made for kids, and the house bread of the day might turn out to be a charming strawberry-orange muffin.

Nothing is sophisticated, but everything is heartfelt and homemade. The service is enthused and occasionally a little scattered but sweet. There are tons of choices for vegetarians, but you can also get a steak for breakfast should you want. BIG Family Cafe serves no alcohol but takes credit cards and is accommodating as can be.

EXTENDED FAMILY: I wasn’t sure, until I called the Marathon gas station next door, whether Auntee’s Home Cooking (645 Danielsville Road) was open or not. Restaurants in that space have a way of coming and going rapidly, no matter how good they are. But it turns out that it is indeed open, with lunch and early dinner served Friday and Saturday and lunch only on Sunday. A few tables bear hints of decoration, and a covered steam table is incorporated into a counter at the back.

Friday often involves fried fish, but Sunday is a classic meat-and-two menu, with a four-veggie plate should you prefer. Don’t skip the cornbread dressing, which is simple, moist without being too wet, accented with plenty of sage and clearly made from someone’s grandmother’s recipe. The macaroni and cheese is likewise well put together, with a good combination of crust and gooey interior.

The black-eyed peas, like many of the offerings, aren’t much to look at, but they taste wonderfully of ham. The fried chicken and the baked ham are competent, the cabbage maybe a bit underseasoned and the breads nothing to write home about. The lemon tea is almost like syrup (you’ll crash from the sugar an hour later), but worth the roller-coaster ride.

Auntee’s takes debit cards and cash but not credit cards, seems to do more to-go business than dine-in (especially right after the church across the street lets out), and isn’t long on atmosphere but is a perfectly nice place to grab lunch, especially if you happen to be in the area.

WHAT UP?: Rashe’s Cuisine on Tallasee is open, serving Jamaican food; the Oglethorpe Avenue Transmetropolitan is open as a franchise; so is Taziki’s, a Mediterranean chain in the Bottleworks on Prince; Troubadour, on Harris Street off Baxter in the old Locos, has closed; The Capital Room in the Georgian on Washington has closed, been sold and reopened as South Kitchen + Bar under the kitchen leadership of Chris Benson of Trappeze; Hubee D’s in Five Points has closed and will reopen as YoBo Cantina, out of Charleston. Stay up-to-date with all local food news by bookmarking the Grub Notes blog.