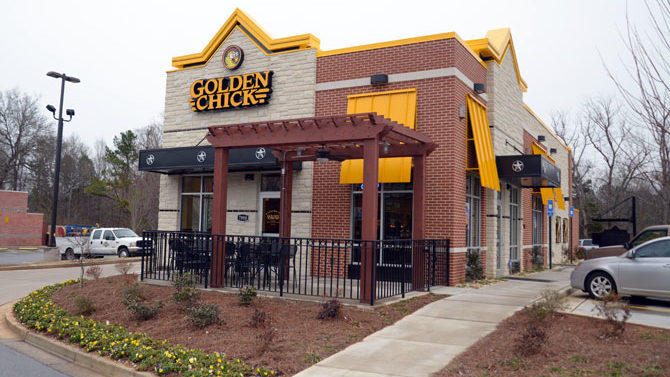 BOK BOK: You might think that Athens and surrounding areas are well enough equipped for obtaining fried chicken (bone-in, boneless, strips, fingers, nuggets, et al.), but Golden Chick, a Texas-based franchise that recently opened at 7990 Macon Hwy., in Watkinsville, didn’t see it that way. The company has 120-plus locations and seems to have been on a tear of expansion lately, although ours is the only one in the state of Georgia for now.

Should you visit it on a Sunday in the post-church hours, prepare for it to be both pretty darned busy and a big slice of Americana. Should you get takeout, the well-scrubbed staff goes over each item in your order before closing the boxes, to ensure that you are satisfied you have received everything. The drinks that come standard with the combos are 32-ounce buckets of Pepsi products. You can get a salad, should you roll that way, or chicken salad if you want something a little healthier, but there’s also free soft-serve vanilla ice cream for dine-in customers, some of whom avail themselves of it as an appetizer rather than a dessert.

The main attraction—breaded and fried chicken tenderloins that come with a side of white gravy for dipping—is a bit underwhelming and not as fine a product as, for example, Hubee D’s version of the same. The catfish is not bad, but the “Golden Roast” chicken is the best stuff you can order. The skin isn’t exactly crisp, but the flavor is good, and it feels like real food. If you picked the fried okra for a side, you would be fairly happy. Everything comes with a giant yeast roll, the mashed potatoes are of the KFC variety and the corn nuggets are worth adding.

Golden Chick is open for lunch and dinner every day, has a drive-through and takes credit cards.

OINK OINK: The first time I looked online for Biscuit Express (8729 U.S. Hwy. 29 N, in Hull, next door to Pizza and Subs Express and just down from Gas Express), the word “sausage” appeared magically, as an associated term. The Internet, as often, was right.

Biscuit Express is not a fancy place. The parking lot is jammed up with big trucks. You need to remember to get some cash out before you go or bring a check. Slotted at the end of a small strip mall, it is kind of easy to miss. But if you appreciate sausage, you should make an effort. Once in the door, join the end of the line that snakes through the few booths, taking some time to eye the compulsively neat bulletin board of business cards, until you reach the small counter with a chalkboard of choices.

The biscuits themselves are at least of average quality—probably a bit better, although still maybe a little moist for my taste—but the fillings are great. I haven’t had a red link-sausage biscuit in years, but, especially with cheese, this one is delicious. Regular mild sausage patties are nearly as good. What you really need to do is pay attention to the sign that instructs, “Ask us about our breakfast burritos.” You should. They are delicious. Hot sausage, eggs, cheese and salsa marry in a substantial tortilla to produce something just as tasty a few hours later as it is immediately. Hash browns are of the McDonald’s ovoid variety but are still two for a dollar. Everything is served up speedily and cheerfully, and the prices are excellent. Biscuit Express is open 5–11 a.m. Monday–Saturday.

PIZZA PIZZA: The most amazing thing about Michael’s Pizza (335 Jefferson St.), a small independent pizzeria in downtown Statham, is that it makes an effort to concoct its own sauce and crust (never frozen) and uses Grande cheese. This may not seem like much, but considering that in the 20 minutes I sat in the space, two separate customers who entered had never heard of a calzone, I would consider it fighting the good fight.

Jack Stirling, a regular reader, sent me a tip about the place recently, touting the thin-crust pizza in particular, and he was right. The Happy Hippie (pesto, artichoke hearts, spinach, sun-dried tomatoes, shiitakes) and the Magnum PI (prosciutto, pineapple, bacon) were both worthy choices, balancing high-quality toppings, and not too many of them, with a somewhat cracker-like thin crust produced by baking the pies in a perforated pan.

The open kitchen works in harmony, industriously, with six or seven folks moving around at high speed to craft pizzas, big salads, the aforementioned calzones, solid hot wings, stromboli and oven-baked sandwiches. The dining room is not luxurious (long, narrow, plastic booths) but is adorned with photos of old-timey Statham, and the restaurant posts its “pizza-losophy” on its website (michaels-pizza.net).

Michael’s is open 3–9 p.m. Monday–Thursday and 3–9:30 p.m. Friday and Saturday. It takes credit cards, does take-out but not delivery, serves soft drinks only and has a phone number-based rewards system for frequent customers.