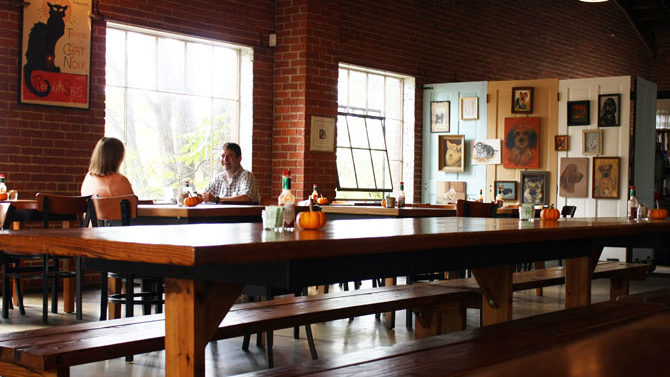 YODELAY: So the chances that Vanessa and Juan Molina’s new restaurant, Echo (255 W. Washington St., 706-548-2266), derives its name from the R. Kelly song about sexing up your lady all day and night are pretty much zero. Instead, one has to see it as a way of saying that the new place is basically the old place, Broad Street Coffee, in a different location.

The space, which up until recently housed Farm 255, is considerably larger than the Molinas’ previous tiny but extremely cute quarters on Broad, near Hancock, and the sizable patio attracts more guests than the big interior, at least while the weather is pleasant. The decor isn’t appreciably different, save for a pretty green trellis with the new name that surrounds the entrance to that patio, a weird wall of dog paintings and a small stage built in the corner inside, which should allow for musical performances even in the cold and rain.

The menu hasn’t changed a ton from the Broad Street days, and its culinary ambitions are specific: exclusively vegan first and foremost, with an emphasis on organic and healthful ingredients. Echo isn’t presenting itself as a gourmet destination, unlike its predecessor in the space, and that managing of expectations is a smart move. The more adventurous-sounding dishes can be better than the basic ones. The “tuna” melt, for example, made with jackfruit mimicking tuna salad and Daiya “cheese” (made with cassava and arrowroot), is a fine imitation of the real thing and better than many with actual fish and cheese. The jackfruit has a pleasant, mildly citrusy flavor, and the substantial multigrain bread is well griddled.

The burrito, on the other hand, which contains brown rice, black beans, veggies and vegan queso, is fairly bland. Whatever the central sauce is that binds it together, with hints of curry powder, it doesn’t taste like much. The stir fry, a veggie-centric option with tofu, broccoli, mushrooms, etc., served over steamed kale, is considerably better. It may have a slightly heavy hand with the soy sauce, but it’s also not shy about flavor, and the texture of everything included is spot-on.

The kale salad uses delicate leaves and tosses them with carrots, red onions, bell peppers, big blueberries and candied nuts. It’s a touch on the sweet side, but it comes together well. The chickpea and sweet potato burger is rather mushy—a hazard of the genre—and, again, a little sugary, but its flavor is good. If you’re ordering a sandwich, you get a choice of vegan slaw or “mac & no cheese,” but I’d recommend upgrading to a salad or veggie side instead, as neither is particularly exciting.

The restaurant is also maintaining the previous tenant’s focus on the bar, crafting regular cocktail specials and offering many deals at happy hour. It does brunch, lunch and dinner, is closed Monday and takes credit cards.

HIT ME WITH YOUR BEST ‘SHOT: Similarly to Echo, the food options at Hendershot’s Coffee Bar (237 Prince Ave., 706-353-3050) aren’t shooting for anything hugely innovative, nor should they be. They’re not the primary reason people go there, but they do offer some good choices for neighborhood grub. Ivey Hughes, local musician, has been cooking up sandwiches and a few other items for some time, and the coffee shop/bar’s move into the former A Tavola has given him a much bigger kitchen.

The refrigerated case next to the bar has a regular stock of pimento cheese (delicious stuff, with a great texture and a bit of a kick to it, and worth the trip), redneck caviar (black-eyed peas, jalapenos and tomatoes, with vinaigrette, and too sweet by far) and chicken salad (somewhere in the middle of these two; still a bit too sweet but pleasantly simple in its composition), ready for grab-and-go.

If you have more time, and you may need it, judging from my experience, the kitchen also makes some fancier things to order, listed on a laminated menu on the bar. You can get a plump game sausage that isn’t too soft, unlike many an entry in the field, served in a nice bun and well grilled with onions, peppers and whole-grain mustard. Or you can opt for a pulled pork sandwich with decent but not spectacular smoke flavor and red-onion marmalade on flat, crumbly pan-fried cornbread.

Sandwiches come with a bag of chips but can be (and are fairly advertised as) small. Burgers, hot and cold veggie plates, a combination of pimento cheese with sriracha and bacon on a biscuit that I didn’t try but sounds fantastic, a shrimp sandwich and a couple of salads round things out.

The atmosphere is pleasantly cluttered, with a selection of used books for sale by the door and a bunch of stuff on the walls. Food to order is available at lunch every day from 11 a.m.–3 p.m. and again at dinner from 6–8 p.m. Thursday through Saturday. There is a full bar plus lots of coffee choices, options for kids include banana milk and, of course, Hendershot’s accepts credit cards.