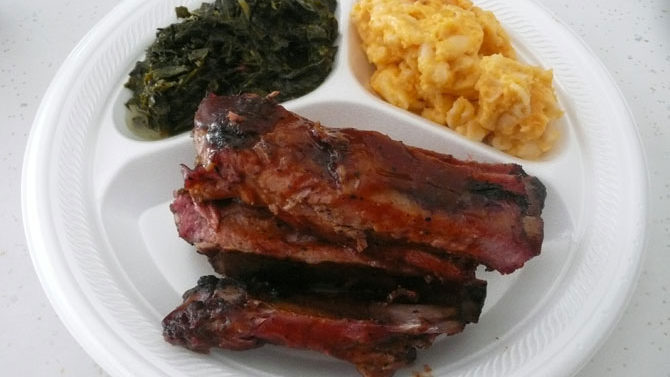 BBQ BEAT: I keep a list of places I need to get to when I have time and there’s nothing more pressing on the schedule. A large percentage of them are either barbecue joints or places in adjoining counties—often both. Scott & BJ’s BBQ (4007 Danielsville Rd., 706-546-1005) is one that’s been on that list for a long time, placed on it when it was originally known as Carithers ‘N’ Scott. Doug Carithers, now retired, started the restaurant with Larry Scott, who continues to run it with his wife, Betty, out of a storefront in the Norwood community, right where Ila Road forks off from Danielsville Road.

Before that, Doug Carithers had Carithers BBQ on South Milledge, in the strip of stores that used to exist across from the Shops of South Athens shopping center that houses Trumps and Fook’s Foods. The ‘cue there wasn’t amazing; it tended to be kind of wet and saucy. But a lot of folks had fond feelings toward it, and sometimes when you ordered a BBQ sandwich, it came with some chopped pineapple on top, which was interesting.

The motto at Scott & BJ’s is, “Where the Food Speaks for Itself,” and that’s true enough, only in that there is very little else speaking for it. No one has sent me a hot tip to head out there. The place itself can easily look abandoned, especially when Betty Scott’s car is the only one in the rugged parking lot. Still, it is a pleasant place, with small booths to the left and a lunch counter right in front when you walk in. Baseball caps, no doubt confiscated from gentlemen in need of a manners lesson, march in a line around the walls. Newspaper clippings about the owners are framed and hung here and there.

Your best option if you want to taste as much as possible is to get the sampler, which will run you $18.75, but comes with pork, beef, chicken and ribs, plus two sides. Betty cheerfully retreats out of sight when you place your order, and the heartwarming sounds of a cleaver at work emanate from around the corner. The meat is generally chopped, as that auditory clue should suggest, but it ends up in half-inch cubes rather than the wet mess that can result from overly enthusiastic cleaving.

The pork and the chicken are half-hearted efforts, kind of dry and not very exciting, but the ribs are solid: tender but with some bite and smoky, with a nice pink ring. The beef, an afterthought at most Georgia BBQ places, is actually quite good. I imagine it may be even better sliced than cubed, but it was a pleasant surprise. The sides consist of slaw (fine), baked beans, hash, potato salad, collard greens and mac and cheese (a little undersalted), plus, to quote the menu, “other vegetables when available”(emphasis theirs). The tea is sweet enough to dissolve some of your tooth enamel.

Scott & BJ’s is open Thursday through Saturday from 11 a.m. to 8 p.m. It does to-go orders and takes cash and checks only.

HOP, SKIP AND A JUMP: Cozy Yum Yum’s recent move from 179 Jackson St. to 489 E. Clayton St., two short blocks away, hasn’t changed things much. The interior is a little less speakeasy-esque now that you don’t have to step down into the restaurant, and has been festooned with posters promoting tourism to Thailand, paper lanterns, fabric and more. The ownership is welcoming and focused on customer service, as always.

The food remains problematic. Order something light like what the menu deems “Sea Breeze,” the basic traditional seaweed salad with sesame oil and seeds, and you’ll be happy. It’s no different than what you’ll get anywhere else, apart from being served in a martini glass. The Tom Yum soup is a little overflavored. The Pad Thai is unremarkable at best; you should probably ask for it spicy.

I had hoped that the imitation chicken that can constitute the protein in almost any dish would be something like that vegetable protein once done so well at Thai of Athens, but it was dark and dank, resembling organ meats in its consistency, which I would think would turn off vegetarians. The restaurant has a sizable bar and makes any number of cocktails featuring sake. Indeed, the old location remains as purely a bar, although its hours of operation don’t seem to be set yet.

WHAT UP?: As already reported, Five Star Day Cafe has closed, with no word of what might take its space, and Farm 255 is due to end operations July 19, with Juan and Vanessa Molina, the folks behind Broad Street Coffee, set to take over the lease. It was big news in both cases, but at least Farm offers the opportunity to go have a last meal or two before it shuts its doors. Full Moon Farms, which supplied most of Farm’s produce, will remain, as will the CSA it operates, but not Farm Cart. Farm representative Rachel Bailey said the Molinas are working to try to hire some of Farm 255’s staff.