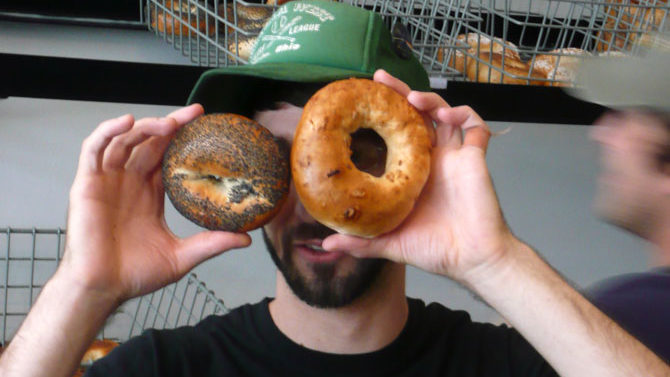 Just Opened: I usually make it a practice to give new places around six weeks before I visit, to give them time to work out the kinks and get their act together, but sometimes I canâ€™t wait. Athens Bagel Company (268 N. Jackson St.) has only just opened its doors, and its official grand opening, with the promise of a full menu in place that includes sandwiches, isnâ€™t scheduled for another week, but the anticipation of fresh bagels, properly made, provoked excitement that couldnâ€™t be tamped down. I wasnâ€™t the only one. Even with only a soft opening, a tiny menu and limited hours for now (usually 7 a.m. to 2 p.m., but check the Facebook page), the place is mighty busy, suggesting all kinds of folks have been jonesing for the same thing ever since Zimâ€™s closed some years back.

So, hereâ€™s all you need to hear: the bagels are good. If youâ€™re going to get super picky, theyâ€™re a little large and they could use a tiny bit more salt, but they are indeed boiled prior to baking, and their texture shows it. Toppings include onion, garlic, poppy seeds, sesame seeds, everything and salt (kind of like a pretzel, with kosher salt dotting the top), and they cost $1.10 each or $12 for a bakerâ€™s dozen. The folks in the kitchen are having fun experimenting with different cream cheeses, offering flavors including strawberry, bacon, jalapeno, roasted red pepper, vegetable, honey pecan and even snickerdoodle, which presumably incorporates cookie crumbs. Those are fine, but the plain is all you need. Really, you donâ€™t even need cream cheese on a bagel this nicely made.

If you need something more substantial, the place also offers breakfast sandwiches made on its bagels, with bacon, egg and cheese available in various combinations, and these, too, are satisfying and well executed. If you must have lox, you can get that, but at $9.99, the bagel that includes it (as well as chips, capers, red onion and tomato) is a little pricey. For now, thatâ€™s all thatâ€™s available, although six taps promise beer on draft eventually.

They are undoubtedly still working out some of the kinks in their counter service and the aesthetics of the space, but I can put up with that. I would put up with worse, too. The product is worth it.

Brand Expansion: After a month or so driving by The Dogg Pound (1660 W. Broad St.) lately, noticing the sign that promises BBQ, and thinking about popping in to check it out, I finally pulled the trigger this past week. I have a great fondness for the hot dog restaurant that occupies the spot of the legendary Walterâ€™s, which has been home to several cue joints over the years. Sure, itâ€™s not much for frills, but the hot dogs are good, the marketing reliably creative, and the people who work there are nice as all get out.

Unfortunately, the BBQ ainâ€™t great. First of all, itâ€™s chopped, which admittedly is much faster to produce but nearly always results in hunks of inedible stuff mixed in with the meat. The texture isnâ€™t bad, considering, but thereâ€™s little in the way of smoke in either chicken or pork. The restaurant also offers beef BBQ, something rarer in Georgia, but was out the day I went. It favors hash rather than stew, which is on the tomatoey side, and its coleslaw is pretty good. Folded into a slice of white bread, with a tiny bit of the sweetish sauce and some coleslaw, the cue would be an acceptable lunch, but itâ€™s not worth going out of your way for. Better to order a hot dog or two instead. The restaurant is open for lunch and dinner Monday through Saturday and takes credit cards.

Revisit: Iâ€™ve had a couple of meals at Heirloom CafÃ© recently, including dinner, and I have to say I continue to become more impressed with its offerings. Yes, its locavore leanings are easy to goof on, Ã  la “Portlandia,” but the restaurant also knows what to do with its beautiful ingredients, and it manages to provide options for any dietary restriction without being annoying about it or unbalancing its menu. A pork tenderloin, battered and fried, then paired with a carrot purÃ©e and perfect greens, is undeniably Southern, meaty and satisfying, and it coexists happily with vegan offerings. A shrimp sandwich that was showing up as a special on the lunch menu was spring-like and refreshing. Desserts are reliably excellent. All of this is to say: props. Heirloom is doing a fine job and deserves a little hat-tip and your business, especially if youâ€™re looking for an upscale dinner out.