A Coffee Newbie Gets a Crash Course from 1000 Faces 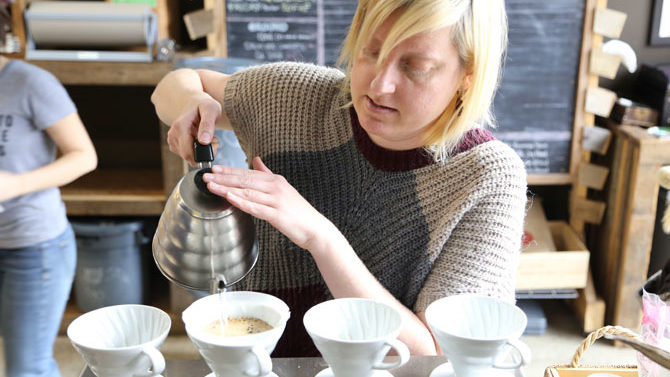 I am 34 years old and, until this week, I had never had a cup of coffee. Not an espresso. Not a cappuccino. Not a latte. Not from Starbucks nor a gas station. Not a sip. I’m not sure why. It wasn’t like I made a conscious decision to avoid coffee, or even caffeine for that matter. In fact, I have a really nasty Red Bull habit.

I think it has to do with how much I hate hot things. When a hot piece of pizza scalds the roof of my mouth, I’m pissed for days. But for the sake of a good story and to say I did, I decide to give coffee a try, and I want to go to a place where I could actually learn something about the process. So I gave 1000 Faces a call—the Jittery Joe’s Roaster nearby on Barber Street would’ve been just as good an option—and they let me hang out with them on a busy Monday morning and walked me through the basics of drinking coffee, all while getting me more hopped up on caffeine than I originally bargained for.

I begin my morning with co-owner Jan Kozak, who gives me a quick tour of their facility on Barber Street. He starts with an explanation of the bean. Apparently, the coffee bean isn’t actually a bean at all, but rather a berry from a shrub. Five minutes in and I’ve already learned something new.

The flavor profile for these beans is similar to wine grapes: The region, climate and soil all play an integral part in giving the coffee bean its unique flavors. Kozak says most coffee roasters go through the roasting process uniformly, i.e. each bean gets treated the same way. But when that happens, all the work the farmers put in gets ignored, and they lose their distinct flavors. So 1000 Faces’ goal is to find a roasting method (called profile roasting) unique to each bean that enhances the natural flavors particular to each bean. This is no small task—they have to roast small batches despite roasting 5,000–6,000 pounds a month.

Alex Reubert, the head roaster, shows us how their roasting machine uses a two-part process. The beans go into the top and are roasted for 12–14 minutes. A laptop allows him to monitor the temperature in real time. Toward the very end, you can hear what is called the “first crack,” when the pent-up moisture inside is released, and the machine is filled with a soft crackling noise. Most commercial roasters fly right on through this phase to the second crack, over-roasting the beans, which gives them the bitter, stronger taste that most people are familiar with. Then the beans drop down to cool off before being put into bins for storage. 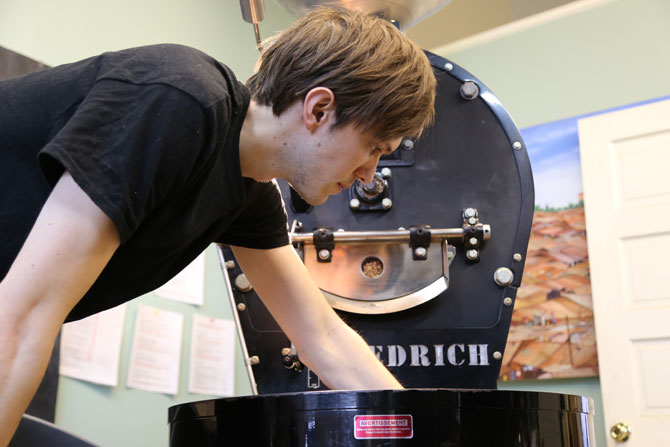 As the beans are coming out of the roaster, workers scurry about packing orders from Athens to New Orleans. Beans go from storage to roaster to bags to out for shipping in less than an hour.

Kozak asks me what I want to try first, so I tell him, “Let’s go with the hard, legit stuff and work my way backwards towards the cream-and-sugar versions.” So out of the gate, we go with an espresso. I’m confident I’m going to do one of those ridiculous spew-everything-out-of-my-mouth things that people do in over-acted comedies. Surprisingly, I learn that espressos typically have about a third to half of the caffeine that a regular cup of coffee has.

He sets me up with a straight espresso from the Condor Chocolates secret stash called Finca Maputo from Ecuador. It’s a bit overwhelming on my first sip, but despite the raging temperature, after I let the flavors sit on my tongue for a minute, I can actually start to taste the different flavors like I can with good beer and wine. Another single-origin espresso called Misty Valley from Ethiopia is described as having strong blueberry-like flavors. Honestly, I can’t tell the difference.

Next is a long black—an espresso dripped into a small amount of water. It tastes watered-down, like skim milk.

Now, onto the infinitely photographable cappuccino. For this one, Kozak explains how the milk and its texture affects the flavor as much as the bean, and how they have to compliment and not take away from each other. He whips up a frothy batch of steamed milk and proceeds to make a pretty little squiggly thing on top. It isn’t bad, but it tastes too much like milk for me and again seems watered down. But it sure does make for a pretty photo. 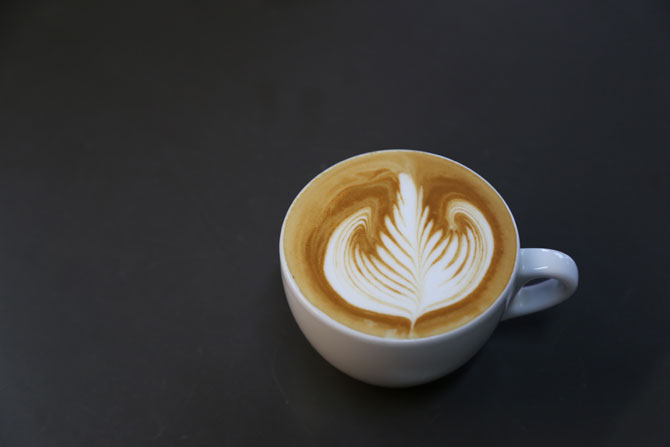 The way Nicky Jones works the pour-over is pure artistry. (Then again, maybe I’m starting to feel the effects of the first few drinks.) It’s reflective: Swirl right, then swirl left. Then slowly swirl right. Then swirl left again. The quiet dripping. The little bubbles at first bloom. I am hypnotized by the art and science behind the pour-overs.

I stick to black and again, despite the temperature, it’s fantastic. It is still hard for me to differentiate between the two single-origins Jones prepares—Suke Quto and José Miguel Alonso—and find the unique flavors from each one, but both are really good up front and have nice finishes that stay with me the rest of the morning. Jones suggests adding a bit of cream to find the differences, but I still don’t enjoy it as much as the darker, more robust punch of the straight stuff. Turns out I like my coffee the way I like my beer: dark, hoppy, bold.

Quite honestly, I went into this expecting to hate everything and was prepared to be super-embarrassed by my lack of knowledge and bad taste buds. But all in all, I could not be more pleased with what I learned about the coffee-making process.

It’s been three days since I had my first cup of coffee, and I haven’t had any since. Part of it is the fact that it has taken me three days to come down off the caffeine high and for my stomach not to hate me anymore. But I can’t wait to get another espresso, or pour-over, or try something completely different. I got outside my comfort zone, and learned a lot about something brand new and something about myself in the process. Not a horrible way to spend a Monday morning.

A longer version of this article originally appeared on The Broad Collective, a local arts and culture website. It is republished with permission.