Cool Out with the Lil’ Ice Cream Dude 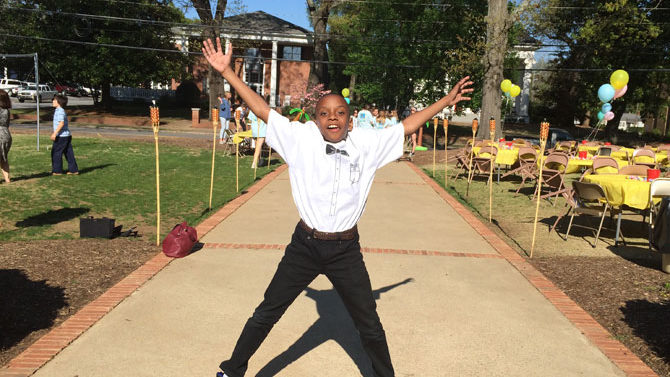 Someday, probably in the near future, scientists are going to discover that the tendency toward entrepreneurship is genetic, and Beau Shell’s family won’t be surprised at all. Shell started his own business selling ice cream and popsicles two years ago, as the Lil’ Ice Cream Dude, and he’s only 9-years-old now. It’s enough to make a 30-something person feel like a real slug.

Where other elementary-age kids are spending their summers goofing off at the pool or playing video games until their eyeballs hurt, Shell is working events with his cart, raising money for his school (Athens Christian) and church missions.

Which is not to say he isn’t still a 9-year-old who can get seriously hopped up on sugar. His parents, Vickie (who teaches marketing in the Clarke County School District) and Rick, have done a bang-up job helping him fulfill his dream, making sure that he focuses on his business without his grades suffering and that he has time to pursue other interests, like basketball and perhaps, this summer, learning to swim.

Back in the summer of 2012, when he was about to turn 8, Shell presented his parents with the idea: He wanted nothing more than to sell ice cream, and he needed a cart for his birthday to make it happen. It’s a testament to his salesmanship that he managed to convince them, even filing for a business license.

In 2013, he started to attract attention, joining the Athens Area Chamber of Commerce, stopping by Jackson Spalding Public Relations, working a Georgia Museum of Art Family Day and appearing at the West Broad Farmers Market. A bout with pneumonia slowed him down briefly, but he bounced back with no less enthusiasm.

Vickie’s marketing expertise has been a big help, especially when it comes to branding, but Beau has plenty of input. He goes along on the trips out of town to the wholesaler where he purchases his ice cream, which isn’t the kind you can get at the grocery store. Rather than wear an actual bow-tie, a la the Good Humor Man of old, he spoke up in favor of designing the T-shirt he wears for his work uniform, which references the tradition but has a little more swag.

He’s grown a lot, both physically and in terms of maturity, since he started in the ice cream business, learning how to present himself in interviews and media appearances, but when asked how old he’d have to get not to be “lil’,” he demurs, saying, “I’ll always be the Lil’ Ice Cream Dude.”

This year, he ran a fairly successful Indiegogo campaign, the Popsicle Project, raising more than $3,000 to transform a covered trailer (“the Popsicle”) in his parents’ yard into a full-fledged mobile ice cream sales device. Shell says the Popsicle has a much bigger freezer than his current small cart, plus air-conditioning.

Towable Tailgates, in Eatonton, is working on making the alterations, which include cutting a window in the side and, of course, a custom paint job, which will highlight major sponsor Peach State Federal Credit Union. When we spoke, the Popsicle was about four weeks from completion, but Shell has other events booked in the meantime.

He has worked 16 events already this year, including Athens Christian’s Jog-a-Thon, the Fox Theatre Revival Tour at the Morton Theatre and an event with Lay Community Center and Park’s mentor program, and is scheduled to sell at the Hot Corner Festival (early June), AthFest (June 18–22, where he’ll be in the KidsFest area), the Fourth of July celebration at Georgia Square Mall, the Classic City BBQ Festival (August at the Classic Center) and the Oconee Chamber Fall Festival (October).

Shell also does private events, like a caterer, and can change what he brings in his cart depending on the audience; grown-ups prefer subtler flavors, and kids, as you no doubt know, will make a beeline for anything sour, brightly colored or studded with bubblegum.

Although Shell has succeeded amazingly so far—just think about your own childhood goals and what kind of progress you made toward them—he has much bigger dreams: paying for his own college education and his 16-year-old brother’s; flying on a plane for the first time; owning a NASCAR team (he loves the sport, especially driver Kasey Kahne); and becoming a millionaire.

Businesses and organizations who want to book the Lil’ Ice Cream Dude’s services can find out more information on his website (lilicecreamdude.com) or call 706-255-7450 to check his schedule and rates. You can also keep up with his doings on Facebook (facebook.com/lilicecreamdudecool), where he posts regular updates.