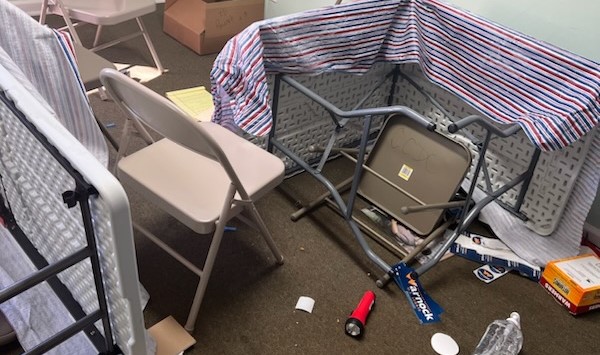 The Athens-Clarke County Democratic Party’s headquarters was broken into and ransacked over the weekend in what its chair believes was a politically motivated attack.

Canvassers called police when they arrived for their shift Sunday morning and found furniture overturned and other damage, said Tim Denson, chair of the ACC Democrats. “The training room had been absolutely ransacked, things thrown everywhere,” he said.

One laptop was taken, according to police, but Denson said a stack of new laptops still in their boxes nearby was untouched.

“It was pretty obviously politically motivated, because they just trashed the place instead of taking any of the valuable things that were there,” Denson said.

However, the doors were locked at the office off Sunset Drive, and there was no sign of forced entry, according to police. Nor was the crime caught on surveillance video.

Guards are present only when the office is open for business, Denson said. He said he’d requested additional security from the Democratic Party of Georgia but was not sure if it would be approved before the Dec. 6 election.

Downtown Parade of Lights Is Happening