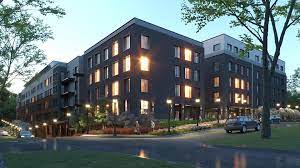 The William, a student housing development on Finley Street. Photo via Facebook.
by Shelby Israel September 16, 2022

University of Georgia students who leased apartments this fall at The William, an incomplete downtown student housing development, will no longer be accommodated at local hotels starting Sunday.

“Due to various circumstances outside of our control, including but not limited to material and labor shortages, the general contractor has been unable to complete construction on The William,” according to a Sept. 15 statement on The William’s website.

After repeated postponements from the original Aug. 14 move-in date, those who signed a lease for the 2022-23 term with The William will be required to secure their own accommodations after this week. The developer, Atlanta-based H.J. Russell, had been paying to put up future tenants in hotel rooms.

“However, despite our efforts to continue such hotel accommodations, the hotels can no longer accommodate our residents after September 17, 2022,” reads the statement. “Despite our best efforts, we have been unable to locate acceptable alternative housing.”

In the statement, The William said lessees may accept a cash payment to aid in housing expenses until the building becomes ready for occupancy.

The William apologized for the inconvenience of the continued delay and stated it is “working diligently with our general contractor to promptly get the building ready for resident occupancy.”

According to the statement, those lessees who wish to terminate their lease will not be penalized.

Photo Gallery: The Band CAMINO at the Georgia Theatre