How a Small Bird Is Shaping Environmental Policy in the West 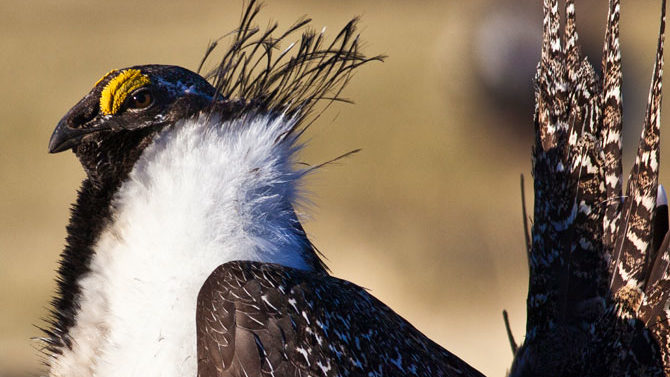 For those in the West, “the bird” is the greater sage-grouse, and a “listing” refers to the threat of the bird being added to the Endangered Species list.

Recent moves by Trump-appointed Secretary of the Interior Ryan Zinke could signal changes to the extensive work aimed at helping “the bird” across 10 western states. These were once words loaded down with angst on all sides. But by 2015 a broad bipartisan group, including conservation groups and ranchers, had created a series of Sage-Grouse Action Plans in those 10 states. Under the plans, ranchers would receive funding and support to improve sage-grouse habitat on their lands. Meanwhile, the Bureau of Land Management amended dozens of land-use plans to further enhance habitat for sage-grouse. Many described it as a win-win—“what’s good for the bird is good for the herd.”

These days, though, those stakeholders are wringing their hands once again, exploring new “what ifs” centered around Zinke’s Secretarial Order 3353, “Greater Sage-Grouse Conservation and Cooperation with Western States.” In June 2017, the Department announced the opening of a public comment period on sage-grouse plans. The idea, the Department alleged, was to “improve sage-grouse conservation by strengthening collaboration among states and the federal government.” The comment period ended Dec. 1, 2017.

Zinke, a former college football player and Navy SEAL who rides his horse around Washington, D.C., who called recent controversy over his travels by helicopter “bullshit,” and has called Hillary Clinton the “antichrist,” is in many ways the perfect Trump appointment: a macho, mineral-extraction enthusiast who has little patience for environmentalists or the implications of the “bird” and its potential listing.

Sage-grouse are seen as an “umbrella species”—meaning when its populations are in peril, so too are more than 350 other species that share their habitat. In other words, when “the bird” is threatened, it’s a signal the entire ecosystem is threatened, too.

But it could also put numerous burdens on landowners and ranchers, and on public agencies tasked with carrying out the tenets of those protections. In some areas, a listing could bar grazing, farming, mining or other activities altogether.

Rep. Greg Walden, a Republican representing eastern Oregon in the U.S. House, applauded the reopening of the comment period. “Oregon’s ranchers and landowners have done great cooperative work to improve sage grouse habitat, and this is a chance for their firsthand knowledge to be incorporated into the planning process,” wrote Walden in an Oct. 6 release, adding that it signals a desire to work with rural communities rather than “just burdening them with rules from Washington, D.C.”

Dan Morse, conservation director for the Oregon Natural Desert Association, disagrees with Walden’s assessment of a top-down hierarchy. “You could not be a rancher in the eastern half of this state in the last five years and not have some knowledge that sage-grouse is declining,” Morse said.

“It’s obvious, ranchers as individuals take this serious. That’s clear,” said John O’Keefe,  then-president of the Oregon Cattlemen’s Association. “The end game is to be sure we don’t have a listing, so we can continue to have the flexibility to do the projects that are going to make a difference.

The two sides are often painted as “grazing versus grouse.” But ranching may not be the biggest threat. Energy and housing were bigger threats by far. And the oil and gas industries are big players in many of the states where stakeholders adopted sage-grouse plans in 2015.

In August, the watchdog group Western Values Project released a statement regarding a leaked document involving the oil and gas industry trade group, the Western Energy Alliance. According to WVP, a memo from the WEA acted as the basis for Secretary Zinke’s current sage-grouse review. WVP says WEA made 15 recommendations to the Interior Department’s sage-grouse review team; 13 of those requests were used in Zinke’s report, according to WVP. This summer, WVP filed a Freedom of Information Act request to see correspondence between oil and gas industry representatives and Interior Department staff.

“We’re now going on our third month without a response from the Department of Interior,” Jayson O’Neill, deputy director of WVP said, noting that WVP has since filed suit for information regarding those emails. “Now, as we’re winding down our public comment period, the public has really still been kept in the dark about why these amendments and these revisions came forward,” he said.

On the department’s appearance of caving to oil and gas lobby pressure, ONDA’S Morse said: “It’s a little disappointing frankly, that they’re so susceptible to this, and just so unsophisticated to saying yes.”

O’Neill said, “We went through 10 years of these discussions and coming to common ground, and then to have them essentially change in such a short time frame without knowing the full motivation behind that has been really troubling for a lot of folks across the West.”

Also added to the mix: the Interior Department’s October decision to withdraw the application to prevent surface mining in critical sage-grouse habitat areas. The previously proposed move to prohibit mining in certain sage-grouse areas would have limited opportunities to expand mining operations on BLM lands, as well as private lands.

“This is a clear signal from the Secretary of the Interior just how willing he is to put mining companies above the needs and wishes of Oregonians, westerners, and the farmers and ranchers he claims to support,” Oregon Sen. Ron Wyden said in a statement.

Nicole Vulcan is editor of the Source Weekly in Bend, OR.