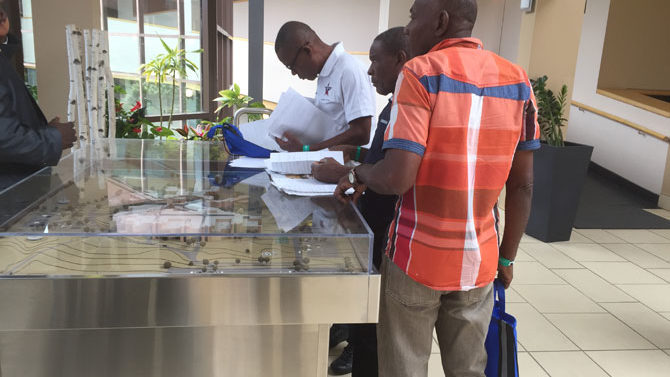 Francois LeFranc, 45, lingers over breakfast in the dining room of the NAV Centre, an Ontario hotel and conference center on the banks of the St. Lawrence Seaway. Dressed in a T-shirt and jeans, he displays only one sign that he had been detained by the Canadian immigration authorities five days earlier: a plastic, hospital-style turquoise bracelet he wears with his ID number on it. He slipped across the border in upstate New York and into Quebec on Aug. 15 with his wife and four kids, leaving his oldest daughter, 20, behind.

Although it has not gotten as much attention as the repeal of DACA, the promised repeal of another protection to immigrants—the Temporary Protected Status offered by President Obama to Haitian immigrants following the 2010 earthquake—has sent LeFranc and more than 5,000 others to seek asylum in Canada since Aug.1. More than 50,000 Haitian immigrants qualified to live legally in the U.S. after the earthquake, which killed more than 220,000, injured more than 300,000, displaced 1.5 million and damaged 4,992 schools—23 percent of the total, according to the Haitian government.

Now, fearful of being deported back to Haiti, he is one of 294 Haitian immigrants wandering the halls and grounds of this conference center in the sleepy city of Cornwall, population 50,000. He is part of a mass exodus of Haitian asylum-seekers that are fleeing the U.S. on the heels of a letter from the U.S. Department of Homeland Security informing them that their documentation will likely be revoked in January and warning them to arrange their departure from the U.S. The Trump Administration has declared Haiti’s earthquake recovery complete; its refugees must go back.

The announcement was made the same day the U.S. government updated its travel warning for those considering a trip to Haiti: “The Department of State warns U.S. citizens to carefully consider the risks of traveling to Haiti due to its current security environment and lack of adequate medical facilities and response.”

Migrants are pouring over the border near the small Quebec town of Hemmingford and then turning themselves in for arrest by Canadian border officials, who bring them to a series of temporary holding centers as they begin processing the paperwork, pleading their asylum cases. The French-speaking Haitians are attracted to Quebec, which also has a sizeable Haitian community, but with immigration processing centers there bursting at the seams, the federal government moved this group of nearly 300 to the neighboring province of Ontario over the course of two days in August. Within a week, they had a tent city prepared to accommodate 800 refugees here.

On one section of the conference center’s vast green lawn, musicians are making their way to a massive white event tent where hundreds of locals will soon pour in for the annual MusicFest, “The Barley and Hops Tour,” $40 tickets at the door. Within sight of concertgoers are 50 black army tents, erected by soldiers in the last 24 hours to house the anticipated influx of 500 more Haitian migrants, according to Lt. Karyn Mazurek, an army public affairs officer.

Inside the upscale NAV Centre (overnight golf packages run $170), patrons get wedding-planning tours, a Christian group coalesces in the lobby, soldiers in fatigues stride the halls, and a cluster of migrants use the glass-encased miniature model of the hotel to both get their geographical bearings and pepper an official with questions about the worn documents they pull from purses and pockets to press on the glass for inspection. Soldiers share a smoke with a few refugees near an exit, and one migrant asks directions to the local pharmacy; the asylum seekers are free to roam.

It’s a far cry from U.S. detention centers. Still, the efficiency and kindness Canadians are displaying should not be misconstrued as welcoming the asylum seekers with open arms. Over dinner tables, at border crossings and in the press, Canadians are having many of the same debates over immigration that Americans have been having.

Back in January, Prime Minister Justin Trudeau responded to the anti-immigrant sentiment in the U.S. by tweeting, “To those fleeing persecution, terror & war, Canadians will welcome you, regardless of your faith. Diversity is our strength #WelcomeToCanada.” But by Aug. 5, with Montreal’s Olympic Stadium temporarily housing hundreds of the arriving Haitians, Trudeau cautioned, “We remain an open and compassionate country, but part of remaining that way is reassuring Canadians that we are processing properly all of these new arrivals,” he said. At the same time, Immigration Minister Ahmed Hussen, in an interview with the CBC, warned against what Canadians politely refer to as “irregular” border crossings.

Back in the NAV Centre’s Propeller Dining Room, LeFranc finishes his breakfast. Since arriving in the U.S., he says, he has worked construction jobs to support his family. His kids have spent their formative years in America, with his oldest daughter attending college until recently, when her immigration status rendered her unable to qualify for student loans. “I am waiting to see if I can find a way for the children to go to school and to find work to help my family. The children do not know nothing about Haiti.”

He doesn’t know how things will turn out for his family in Canada. “I’m just taking a chance,” he says.

“We live a life of struggle,” he says with a shrug. “If your eyes are open, you will see struggle all around you. That’s the way life is.”