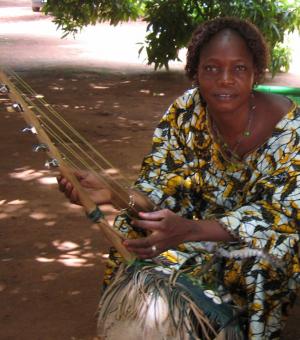 South Mali’s Kokanko Sata is the only known female to have mastered the kamele n’goni, or “boys’ harp,” an eight-string lute with a taut, twangy sound. Knowing that men would be unlikely to share their knowledge of the instrument, which was traditionally played by hunters in special ceremonies, Sata broke taboo by building her own from a gourd and teaching herself. When Blur frontman Damon Albarn traveled to her homeland on an Oxfam-supported trip, Sata was recruited to contribute to his 2002 release of Mali Music. A few years later, she released her own self-titled album on his label, Honest Jon’s. Equipped with a warm, heart-filled voice, Sata’s Athens performance will include original compositions as well as renditions of traditional hunters’ songs from the West African savannah. This free performance begins at 6:30 p.m.