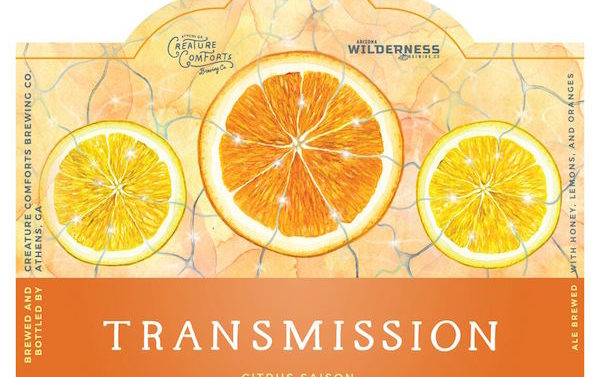 It’s a funky citrus saison (5.6% ABV) brewed with honey from Danielsville’s Booger Hill Bee Co., oranges and lemons from The Farm at Agritopia in Gilbert, AZ, and citrusy Mandarina Bavaria and Lemondrop hops, then bottle-conditioned for four months with Creature Comforts’ house yeast and bacteria cultures.

Transmission will be available in 750 milliliter bombers at the brewery only starting today, Thursday, Sept. 29.

In October, the Athens brewery releases its next seasonal beer, Epicurious, on draft and in cans. It’s a beer that doesn’t fit into any style, but one that “a chef will want to drink and serve with their food,” CEO Chris Herron says, and the head chefs of The National and Atlanta’s acclaimed Staplehouse, Peter Dale and Ryan Smith, worked with the brewery on it.

Epicurious has… a lot going on, so I’ll just let the Creature Comforts trying to explain it:

Epicurious is refreshing, versatile and approachable. It is highly carbonated with an invigorating minerality to help cleanse the palate in between bites of food. The beer has an ABV of 4.2 percent, which also contributes to the beer’s food friendly nature. Epicurious’ earthy, floral and soft citrus hop character is balanced by complex yeast flavots and subtle bitterness in the finish. The rustic grains and flaked oats used in the beer lend to a nice grain flavor and firm mouthfeel.

There you have it.