Atlantans Are Whining About Their Lack of Tropicalia 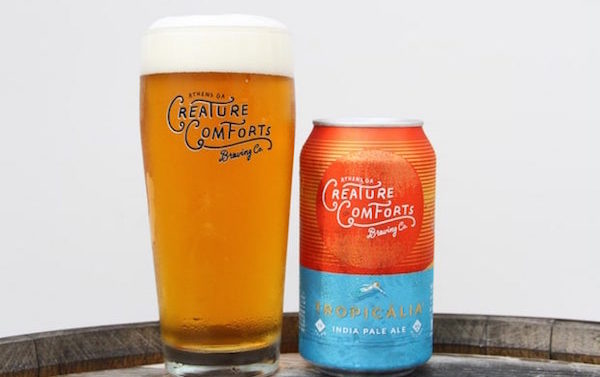 A few weeks ago I went to a cookout in Atlanta, and a friend of a friend who works at a package store told me that they sell out of their weekly allotment of Tropicalia within hours, even though they limit purchases to one six-pack per customer.

He wasn’t lying. The AJC recently ran an article about the city’s shortage of Athens-based Creature Comforts’ flagship IPA. Just another reason to be glad you live in Athens.

The article also includes some interesting insights into the limitations on production that small craft breweries face. As international beer conglomerates buy up crafts, they’re able to negotiate better deals with hop growers.

“Much of the independent hops production is set aside for the major producers, making more difficult the acquisition of hops by craft brewers without placing multimillion-dollar commitments spanning out into 2022,” Creature Comforts CEO Chris Herron told the AJC.

With the two largest beer companies in the world—Belgian/Brazilian Anheuser-Busch InBev and London-based SABMiller—merging, Herron worries that such a giant player could curb craft brewers by denying them access to raw materials.