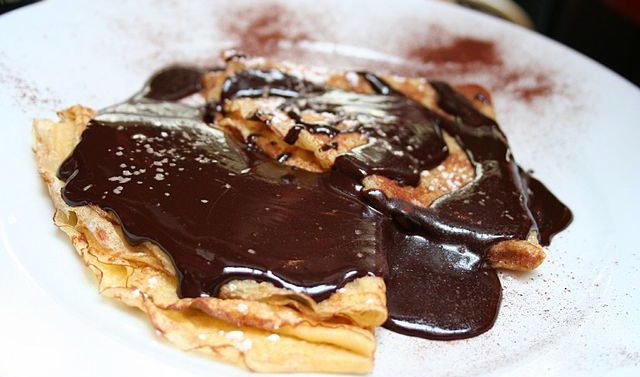 Saphir Grici is still pretty new to Athens, and he moved here not for career reasons or school but for love, having met his now wife (an Athenian) during her studies in Paris. Now, inspired by a visit to Los Angeles, he’s starting his own business: a food truck called Holy Crepe.

Although Grici isn’t a chef, he trained in Brest (save your snickering, middle-schoolers), in the northwest of France, the region renowned for making the best crêpes in the country. He’s been road- and crowd-testing his set-up, which involves griddles and, of course, crêpes made to order at New Earth Music Hall, and the reactions so far have been positive.

Grici’s expectations for quality are high, and he plans to do both sweet and savory crêpes, the latter made with organic buckwheat. Prices are still in flux but he estimates they’ll run $6-7 for savory and $3.50-4.50 for sweet.

He has the truck, a big one like Streets, and is working on the kitchen aspect, probably the hardest requirement of the mobile business. The laws require a stationary commercial kitchen for health inspections, which cannot be shared with another mobile eatery, so Grici is hoping that New Earth will build one to satisfy the requirements.

He hopes to be operational in April, still at New Earth, during shows and late nights, and he is optimistic despite the hurdles he has yet to clear.