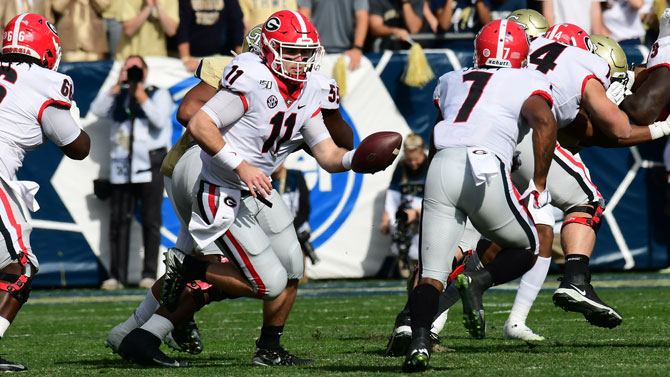 So here we are, in the same place we’ve been each of the last three years. 11-1. SEC East champs. Needing an SEC title to qualify for the College Football Playoff.

Even though we’ve been here before, there’s a different context for this attempt to earn our way into the playoff. The last two years we played Auburn and Alabama, respectively, and beat the Tigers but lost to the Tide. This time around we play an LSU team that looks more dynamic than either of our recent SEC Championship Game opponents. Led by quarterback Joe Burrow, LSU has one of the most exciting, high flying, deadliest offenses in the country.

On top of that, Georgia has looked like the worst really good team in college football this season. LSU will be favored, and neutral fans will (understandably) side with the Tigers simply because they’re a more exciting team to watch.

Like all coaches, Kirby Smart loves to sell the disrespect, the “Us. vs. The World” narrative, no matter the circumstances. Only this time it’s true. Make no mistake, we are the underdog in this matchup, just not a lovable one. In modern college football, fans want to see explosive offenses, not immovable defenses, even if that defense is by far the best in college football. (Again, understandable.) So let’s embrace our role as the unlovable underdog and make the rest of the college football world hate us as we boringly win an SEC title.

The most exciting way to win would be for the offense to suddenly start clicking and to beat that high-scoring LSU offense in a shootout. The most Georgia way to win would be for the defense to become the first team this season to stop the LSU offense, and a combination of the offense and Rodrigo Blankenship putting up just enough points to win something like 20-19. Oh man, the rest of college football would hate us if we did that. But why the hell should we care who hates us? Do you know who college football fans always hate? Winners.

If nothing else, we just need to stop being delusional about what this team is and has the potential to be. We’ve played 12 games. The regular season is over. At this point, we are who we are, and that ain’t gonna change. We need to embrace that fact, because the only way we’re going to win the SEC Championship Game—or the national title, for that matter—is the Georgia way. The defense has to win the day, and the offense has to do just enough to get over the hump.

There is some hope that Jake Fromm can give us a boost by regaining some form. HIs 2,385 yards passing, 21 touchdowns and three interceptions for the season is a very Fromm-esque stat line, but he’s struggled mightily with accuracy this season. In the last four weeks, he hasn’t posted a completion percentage higher than 50%. If the old, deadly accurate Fromm returns against LSU, it might be just enough to put the offense over the top. But even so, the strategy of relying on the defense to win the game and the offense to not lose it will remain the same. That’s just who Kirby is.

This Georgia team has consistently been negatively compared to the Alabama teams from 2009–2013, which had brilliant defenses and meager offenses. And this style does seem a bit passé in a world where seemingly the entirety of college football—even the likes of Alabama and LSU—have embraced explosive, pass-heavy spread offenses. But those Alabama teams won three national titles playing the way Georgia is playing now. It may not be the style du jour, but it has proven to be effective in the not-so-distant past.