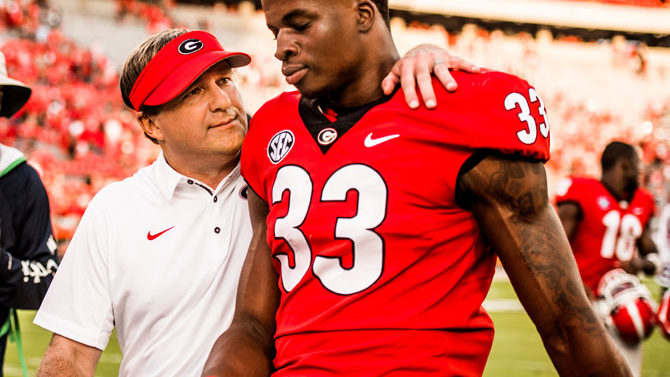 You may think that Avengers: Endgame is the crossover event of the spring, but you’d be wrong. There’s an even bigger crossover coming in April featuring many Athenians’ two favorite things: Georgia football and weed.

Any astute observer may have noticed that this year’s annual G-Day scrimmage, the one day of spring where Georgia fans get to watch actual UGA football, falls on Apr. 20, the one day of the year where potheads have an excuse to get ripped, other than “the day ends in ‘y’.”

This G-Day/420 crossover falls right in my wheelhouse, not just as someone who is a fan of both weed and the Dawgs, but also as someone who has been to a number of Georgia games high as a kite. I was blessed enough to live in Five Points for a chunk of my college career, where we could tailgate from the comfort of our front yard before embarking on a 10-minute walk to Sanford Stadium. That walk was always a lot more enjoyable when preceded by a smoke on our front porch. So, while I think I bring a level of expertise to all my writing about Georgia football, I feel like I’m the only member of the UGA media who can lend his expertise to this particular crossover—or, at least, the only one willing to admit it.

But Georgia football and weed don’t always mix. Take one recent example ripped from the headlines: the arrests of UGA linebackers Brenton Cox and Robert Beal. Cox and Beal were arrested in early April on misdemeanor charges of possession of less than 1 ounce of marijuana. According to the police report, a residence hall director had gone to perform maintenance in their room, Room 420—that is not a joke—when he noticed the smell of marijuana. A search warrant was issued, and upon investigation small amounts of marijuana were found in various places in the dorm, according to the report.

A few things: First, by college student law, any Room 420 in any dorm or apartment building is a designated smoke spot. Those are the rules, and I won’t place a bit of blame on Cox or Beal for following them. Second, does no one know how to turn a blind eye? I’m not saying Cox or Beal should receive special treatment because they’re football players. They should receive special treatment because they’re people. Pull them aside and tell them to get that stuff out of the dorm and keep it out, but a little weed is never a good reason to call the cops.

Kirby Smart said he planned to handle their punishment internally, and at least part of that punishment seems to include running stadium steps at Sanford. Hopefully, that’s the extent of their punishment, and they aren’t forced to miss game time, something that could affect Georgia’s season or, more importantly, Cox and Beal’s own future earning ability. Save the real punishments for folks who steal, commit violence or put other people in harm’s way. After all, these dudes were only doing what a thousand other students will be doing on G-Day, while Cox and Beal are working their asses off to make money for the university (and not getting paid for it).

But back to the topic at hand: Surely some of you have grand plans to smoke out before going to G-Day. More power to you! But, as is the case any time you mix drugs and a big crowd, there is the potential for things to go awry. Remember to eat something downtown or at the Tate Center to take the edge off. Stay hydrated by bringing a water bottle to fill up at the stadium. Don’t get too high—you’re going to be in public, so you still need to be a functional human. If you start to feel sensory overload, just split. Admission is free, so no harm, no foul. Most importantly, don’t carry. Leave your sack at home. Security will be everywhere, and no G-Day is worth getting arrested over.