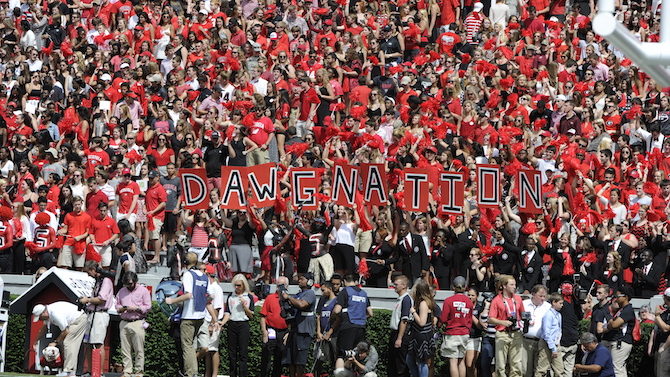 Everything was setting up perfectly for the National Championship Game on Monday. For the first time in 38 years, Georgia would compete for the crown of college football’s best. And to win, it would have to defeat Alabama, avenging that 38-10 drubbing suffered on a rainy day in 2015 in the process. Did I mention the game will be played in Atlanta, 70 miles from Athens and within striking distance of most Georgia fans on the planet Earth? Nothing could mar this most glorious of occasions. Nope, nothing.

Then, ever the turd in our punch bowl, President Donald Trump decided he would attend, as if to remind us nothing in this world can be truly enjoyed anymore.

I have neither the space nor inclination to go over all the ludicrous and/or dangerous things Trump has said and done in the first year of his presidency, a year-plus on the campaign trail or the other 69 years of his miserable existence. You’re living in the future, so you know better than I what idiocy and hate he’s spewed lately. But, it’s safe to say, I and many other Georgia and Alabama fans, don’t want the Cheeto-in-Chief anywhere near our title game.

Trump is not the first, and won’t be the last, president to attend a major sporting event. But most times, the president has either a rooting interest—like Bill Clinton at Arkansas’s 1994 championship game in basketball—or is a noted sports fans—like Barack Obama and George W. Bush. Trump has has no rooting interesting and isn’t much of a sports fan. His reasons for attending are brazenly self-interested.

The states of Georgia and Alabama produced two very good football teams this year. The states of Georgia and Alabama voted for Trump in the 2016 election. Those are two facts that have nothing to do with one another, but Trumpian logic says they’re intrinsically connected. In Trump’s world, things only happen because of or in spite of him. So obviously his election sparked a wave of winning in the Peach and Yellowhammer states, spurring these two football teams on to greatness. He’ll be in Atlanta to ride the coattails of the victors and claim their win as his own. (Or, maybe he will. In true Trump fashion, he sparked a furor over his decision to make the trip, and hasn’t confirmed or denied whether or not he’ll actually make it in the days since.)

But while Trump may want claim some sort of ownership over Georgia’s accomplishments since he took 16 electoral votes from the state, I’d like to remind him, and everyone else, he didn’t win Athens. Trump won roughly 29 percent of the vote in Athens-Clarke County.

Thanks in large part to the university, Athens is a melting pot. People from all over the world have immigrated from countries across the globe to come to Athens in an effort to learn and better themselves. Countless LGBTQ kids who were discriminated against in their small Georgia towns have fled to Athens over the years, for the first time finding a place where people accept them for who they are. From the Morton Theater to the Hot Corner, the City is chock-full of African-American history. We’re the home of folks such as A.R. Killian, a black police officer who helped protect the black students who integrated the university from white mobs who would them harm. These are facts we, as a community, can and should be proud of.

But to Trump and many of his ilk, these are facts that make Athens un-American, because, in their world, anything that ain’t white and straight ain’t American. His policies would directly harm many of the most vulnerable members of our community. So, though he may try, Trump doesn’t get to just claim Athens as his own.

Trump’s calculus in this political stunt isn’t completely off, though. God knows there are plenty of Georgia and Alabama fans who voted for and still support Trump. And there will be plenty of good ol’ boys and corporate shills in Atlanta to shower him with all the praise and fawning he desires when he makes his entrance at the natty. His name simply can’t be brought up without incurring a round of mud-slinging between our side and theirs.

And that sucks! Not to get all “stick to sports,” but the last few months I have felt a kinship with my fellow Bulldog fan unlike any other time since I began supporting the program. For the first time since the election, I’ve felt something other than a sense of betrayal toward the folks who live in rural Georgia and voted for Trump without thinking about how it would affect anyone but themselves—people like my parents and pretty much every other member of my extended family. Man or woman, black or white, straight or gay, right or left, we were all brought together by this football team. That may be something small, but it’s still something that can maybe start to bridge a gap, bring people together and help us all understand how our actions affect others. It gave us common ground, and common ground is always the starting point.

But now the “we” that was Bulldog Nation for a brief moment has been broken apart in favor of the “us vs. them” created by the Trump White House. And that moment he waves from the press box will prove it. Because you’ll boo, and the Georgia fan next to you will cheer, then you’ll both remember how much you disagree on everything, and any togetherness created by the Dawgs will be undercut by the Orange Asshole waving from the luxury box.

Trump’s presence at the game isn’t enough to make me miss it, though. Or at least it wouldn’t be if I had a few thousand bucks for a ticket. And I don’t expect anyone lucky enough to get their hands on one to choose not to attend because of him. But Trump in Atlanta should give pause to the many Athenians who planned on heading to the city in hopes of snagging a ticket or just being nearby when and if Georgia takes the crown.

Atlanta traffic is already bad. Couple that with a presidential visit and a national championship game, and you’ve got all the makings of nightmarish travel conditions.

Instead, I invite you all to join with me and stay in the Classic City to watch the game with your fellow Athenians of all backgrounds. This is an opportunity for us to share a common space and have fellowship with members of our own community, something Athens does better than any other town or city in Georgia. Put on some red, head downtown, tell a stranger “Go Dawgs,” and let this championship serve as a reminder of what binds us together, not what tears us apart.

Beer’s on the Line in the National Championship Game