Can the Dawgs Win It All This Year—and Be Consistent Contenders? 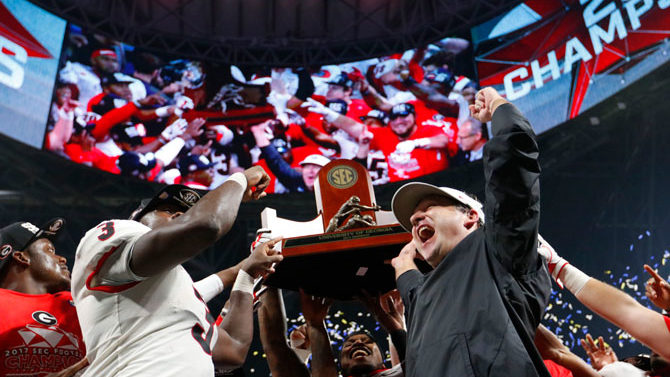 It felt like the culmination of the 2017 Revenge Tour. On their way to a 12-1 record (so far), the Dawgs defeated every team they lost to last season. And in the SEC Championship Game, they avenged the 40-17 loss to Auburn in early November with a win over the Tigers in a game that was astronomically more important. In his two seasons at the helm for Georgia, Kirby Smart hasn’t lost to the same team twice.

In the grander scheme, it felt like the culmination of Georgia’s 12 years in the wilderness. Before Saturday, the last time UGA won an SEC title was 2005. Dawg fans have been dreaming of reaching the SEC mountaintop for the last decade-plus. That span has featured a lot of ups and downs, but the last five years have seen many more downs than ups. Before this year, Georgia last reached the SEC title game in 2012, when it lost to Alabama at the last second, costing it a trip to a very winnable national title game against Notre Dame. That was the beginning of the real downturn in Athens. UGA was average the next few years, and got crushed in about every big game, including the next time it faced Bama. Mark Richt was fired in 2015 after 14 years on the job. Smart came in, and in two seasons he won an SEC title and got into the national title hunt.

But as exciting as the end of the Revenge Tour and the end of the search for a spot among the elite of college are, we shouldn’t dwell on them too long. Because what’s more exciting is that this is the beginning of something new, something better, and there’s still a lot of work to do in both the short and long term.

Short term, there’s the little matter of the College Football Playoff. No. 3 Georgia will face second-seeded Oklahoma in the Rose Bowl Game in Pasadena, CA on New Year’s Day. It’ll be only the second time Georgia has competed in the Rose Bowl and the first time since 1943. It’s never played a game against Oklahoma, one of the most storied programs in college football.

If Georgia beats Oklahoma—a tough task, considering the Sooners have the best offense in the country—it’ll face Clemson or Alabama in the championship game in the a familiar setting: 70 miles from Athens at Mercedes-Benz Stadium, where it just won the SEC Championship. I’d imagine a fair number if Dawg fans would make the arduous journey to Atlanta to watch UGA play for its first title in 37 years.

Long term, we have to make sure this is the new standard, and not a one-off. Let’s not forget the early years of Richt’s tenure in Athens. He also won his first SEC title in his second season as head coach and made us think we were on the cusp of a new era of Georgia football. He won another a few years later to reinforce that belief. Then came the 12-year drought that got him run out of town.

The moral of that story is that the work is never done. At the risk of sounding like I’ve drunk Smart’s Nick Saban Kool-Aid—which I have—success is a process. One season near the top doesn’t make you successful. Winning the SEC and competing for the national title on a consistent basis does. We’ve taken the first step toward doing that, but there are many more ahead of us, starting with the Rose Bowl.

For the past few decades, we’ve watched so many of our rivals reach the pinnacle of college football. Since the last time Georgia won a national title, Georgia Tech, Tennessee, Alabama, Auburn, Florida and Clemson have all taken home the crystal football. Three of them have done it twice or more. Now it’s our turn to take a shot at the natty, then make sure it doesn’t take another 37 years to get another.