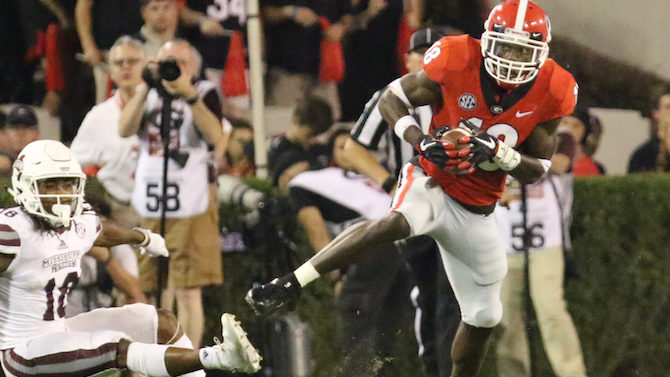 Sometime between the flea-flicker that turned Sanford Stadium into a madhouse and the umpteenth gang tackle by Roquan Smith and J.R. Reed in the 31-3 demolition of Mississippi State, I realized this team has some qualities we haven’t seen in a Georgia team for a decade or more. We have swagger and passion and toughness and not just a will to win, but a will to beat the daylights out of our opponents. In short, I realized we are good.

Before Saturday, I’d already realized Georgia is good in the relative sense of the word. The Dawgs beat Notre Dame on the road and handled business against a tricky mid-major in Appalachian State. But those wins only made me think Georgia was good insofar as it’s good enough to win the garbage SEC East.

It’s clear now Georgia is good. Period. No need for equivocation or qualifiers. Put these Dawgs up against any team in the country, and it has a legit shot to win. Between a defense full of head-busters and an offense with plenty of established weapons, Georgia can hang with any team in college football. That’s something we’ve only been able to say a handful of times in two decades.

The offense is different. That much was clear from the flea-flicker from Jake Fromm to Terry Godwin the Dawgs scored with on their first offensive play of the game. A play like that is a result of hard work in the film room and on the practice field. The coaches identified MSU’s secondary as a unit that will bite when they see the run, and got the play down to perfection in practice. When they deployed it, it created the greatest explosion from the Sanford crowd I’ve seen since Todd Gurley’s 100-yard return against Clemson in 2014. The refs might as well have called the game then and there. It doesn’t absolve offensive coordinator Jim Chaney of all his horrendous play calling in the past, but it does breed confidence that he and Kirby Smart can identify weaknesses in the defense and exploit them.

Special teams are different. Last season, poor play on kickoffs and punts gave opponents good field position, putting the Dawgs in a hole before the offense and defense could work. This season, Rodrigo “Godrigo” Blankenship has 13 consecutive touchbacks. Transfer punter Cameron Nizialek averaged 45.5 yards per punt and didn’t allow a return. Georgia is winning the field position battle on special teams, and it makes life so much easier.

The defense is so, so different. This is the first Georgia team I’ve seen since the early aughts that relishes hitting. After a few hits on MSU QB Nick Fitzgerald on the opening drive of the game, it was clear he wanted nothing to do with this defense. It swarms to the ball and lays licks on anything in a different helmet. And when MSU really started pressing the game, the defense shut down any hope of a comeback with interceptions on consecutive drives.

I said last week that if Georgia wins this game, you can think about running the table. There’s no team left on the regular-season schedule Georgia can’t or shouldn’t beat. I’m no longer thinking it. I’m expecting it. That will probably lead to disappointment, but that’s how excited I am about this team.

But I’m even more excited for the future of Georgia football. If this is the kind of team Smart can build in his second season with a talented group of Mark Richt holdovers, imagine what he can do with the stellar recruiting classes he’s bringing in being brought up in this new, tough, passionate, swagger-filled culture of the program. If Saturday night is the new standard for how Georgia football performs, there is nothing this program can’t achieve.

John Barrow Is Running for Secretary of State