By Beating Notre Dame, Georgia Shows It Can Overcome Its Flaws 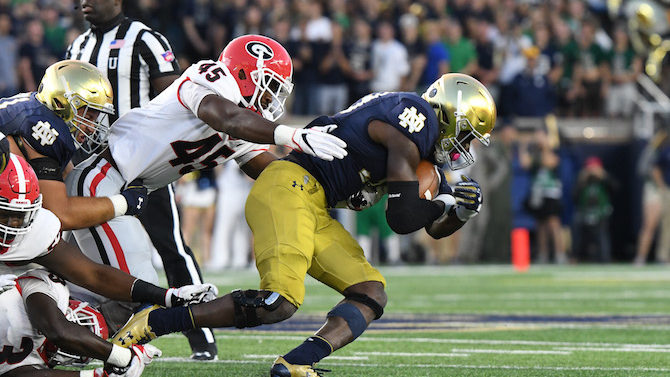 If there was a mistake to be made, it seemed like the Bulldogs were bound to make it Saturday night. Dumb penalties piled up. Freshman quarterback Jake Fromm was skittish and forced too many throws. There were a number of questionable play calls, as well as a questionable strategic decision to give Nick Chubb just 13 carries. The defense did its job and then some, but self-inflicted blow after self-inflicted blow put the Bulldogs in a position to let a win in South Bend slip through their fingers.

But, as you know, Georgia didn’t lose. In front of a Notre Dame Stadium crowd that was at least 40 percent red—nice work, Dawg fans—UGA won 20-19. And that’s why all those bad decisions and mental mistakes are good news.

For the first time since I don’t know when, Georgia powered through a game that wasn’t going its way and scraped together just enough big plays to win. It’s not the ideal way to win, but considering the number of well-matched opponents Georgia has left on its schedule, the ability to scratch and claw and overcome their own mistakes could give the Dawgs the edge they need to get over the hump in the SEC East.

That doesn’t mean there is no reason for concern over those mistakes. Penalties were a big reason Georgia won by one point instead of 10 or more. UGA racked up 12 for 127 yards. Many of those extended Notre Dame drives that led to points. One of of them brought back a 90-yard kick return.

Another issue was Fromm, who looked much more like a freshman against the Irish than he did against Appalachian State (which is understandable, considering Notre Dame’s defense is much fiercer than App State’s). But, like he did in Week 1, Fromm still stared down his receivers and forced throws. He finished with 141 yards, a touchdown and an interception. I’ll feel much more comfortable when Jacob Eason is back under center.

The most troubling problem is a continuation from last season—poor play-calling in crucial situations. Exhibit A: When Georgia was trying to ice the game on 3rd-and-1 up a point with a few minutes left, Kirby Smart and Jim Chaney elected to hand the ball to fullback Christian Payne instead of Chubb. Payne was stopped at the line, and the Irish got the ball back.

That bad call will be somewhat forgotten because the defense stepped up—as it did all night—on the ensuing Notre Dame series. But sometimes the obvious decision is the right one. Give the ball to Chubb when you need a yard. Hell, just give the ball to Chubb. Thirteen carries is far too few.

The exciting thing about these mistakes is that they can be corrected fairly easily. That’s a far cry from last season, when many of Georgia’s issues were more endemic. Last year, it was clear early in the season that the line was an issue. You’ve got the players you’ve got, and they weren’t magically going to become more talented midseason. This team has shown no flaws that can’t be fixed—at least not yet.

Given some time and effort from Smart and his coaches, all the aforementioned ills can be remedied. And while they do it, the team has one rock it can rely on: the defense. The defense was lights freaking out. It’s the most ferocious defense I’ve seen at Georgia in ages, and they’ve bought into Smart’s system. Without Lorenzo Carter and Davin Bellamy containing the edge on QB runs and coming off it on passes, Georgia loses this game. Regardless of what the offense does, the defense should be good enough to keep us in striking distance of a win in every game this year. Kudos to Mel Tucker for the job he’s done with this unit the last two seasons.

One of the marks of a good team is the ability to overcome its own flaws. Georgia did that against Notre Dame. The next step is to win without the flaws instead of in spite of them.