G-Day Is the Best Game Because Georgia Can’t Lose 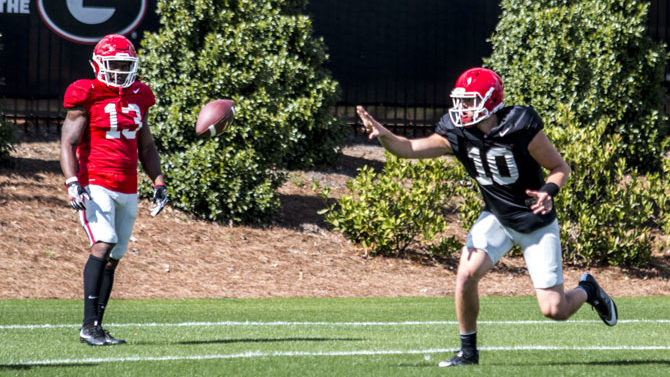 It’s that time of year again. Birds are chirping. Flowers are in bloom. Pollen is clogging every orifice in my face. I’m rocking shorts every day and showing off my pasty legs to the world. Spring is here, and with it, spring football.

Georgia football’s annual intrasquad scrimmage, G-Day, is slated for 2 p.m. on Saturday, Apr. 22 at Sanford Stadium, as Kirby Smart puts a cap on his second spring as Georgia’s coach. And, I must say, I’m actually kind of pumped for this meaningless football game because of the fact that it is meaningless. Because, honestly, I can’t take another L right now.

The last football game I watched, much like most of you, was the Super Bowl. The Atlanta Falcons were well on their way to victory before offensive coordinator Kyle Shanahan went full Bobo and refused to RUN THE DANG BALL. The Patriots mounted an all-time great comeback and crushed my hopes and dreams, because there is nothing pure or good in this world.

And that’s where I left off my football watching—with the most horrible football game I’ve ever experienced. After that, I need G-Day.

There are many who will lament the fact that G-Day doesn’t matter, but I say screw those guys. I want a game that is impossible to lose. That also means it’s impossible to win, but I’m willing to take that to avoid another Falconian defeat. I’m still in recovery, and any game that even has a whiff of meaningfulness—which is pretty much every game on Georgia’s regular season schedule as it hunts for an SEC East title—is just too much for me right now. I need football that means jack squat to serve as a barrier between the heartbreak of last year and the likely heartbreak of this one. (Georgia fans are nothing if not fatalistic.) Think of it as a palate cleanser. G-Day is the sorbet of football.

But even though the score is unimportant, there will be some important things to keep an eye on. One is the situation at wide receiver. QB Jacob Eason will be looking to take a huge step forward as a sophomore. To do that, he’ll need a lot more help from his receivers than he had last year, when a wiener-finger epidemic hit the receiving corps. Hopefully all the WRs have been vaccinated now and will leave the drops to a minimum.

One name to look out for at receiver is rising sophomore Mecole Hardman. Hardman played defense last season, but with an influx of talented defensive backs in the last recruiting class, his talents will be better served on offense. He’s explosive with the ball in his hands, so keep your eye on the field any time No. 4 totes the rock. Terry Godwin is UGA’s returning receiving leader, and he’ll be looked to even more in the passing game this year. Playing out of his favored slot position should help him make a big jump in production in 2017.

The defense returns all but one starter and will undoubtedly be the strength of the team. On G-Day, keep an eye on the aforementioned talented freshmen. Early enrollees Deangelo Gibbs and Richard LeCounte are fighting to earn minutes in the secondary. If this is the first time hearing these dudes’ names, remember them. They’ll be mainstays on D for the next three or four years.

If all those guys stink it up, it won’t matter, though. Just as it won’t really matter if they’re the best players on the field. Because G-Day doesn’t matter, and that’s the beauty of this game. If everyone is garbage, we can write it off as a dumb scrimmage. If everyone on the field looks like an all-star, we can get pumped about a better season than last, even if the win offers no proof that such a thing will happen.

If we win, we win. If we lose, we win. And I could really use a win to wash that Falcons taste out of my mouth before next season.