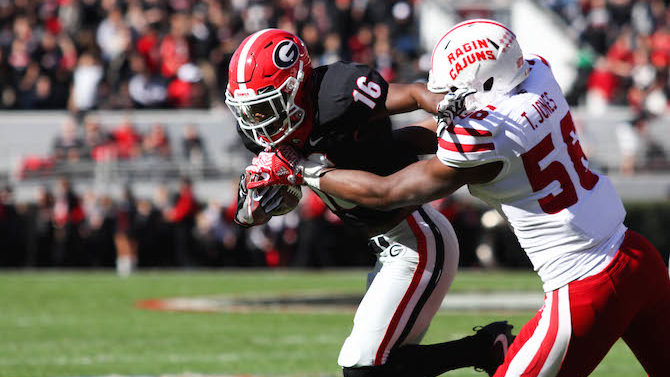 Here’s a recap of Georgia win over Louisiana-Lafayette for anyone who really wants one:

Isaiah McKenzie scored on a 55-yard run and an 82-yard punt return to give Georgia a two-touchdown lead early in the first quarter. Jacob Eason did little slinging in the windy conditions, but completed 13 of his 19 passes for 165 yards and two touchdowns. Nick Chubb rushed for over 100 yards once again and scored twice. The defense picked off the ULL quarterback thrice, one each for Deandre Baker, Malkom Parrish and Aaron Davis. ULL closed the gap once the Bulldogs put in their second team, but Georgia still managed a 35-21 win to give it a 7-4 record this season.

OK, now that that’s out of the way (takes deep breath)…

Georgia squares off with in-state rival Georgia Tech this Saturday in Athens. The game with the Yellow Jackets is always important, but it has a slightly different tenor this year. For Kirby Smart, it could determine if his first season in charge at Georgia is perceived as a slight success or a slight failure.

The goal for this season was set, by fans at least, at roughly nine wins, the amount Mark Richt got in his final regular season. Beating Tech would give the Bulldogs eight. In my mind, that’s a really strong effort, considering Smart inherited a patchwork offensive line and freshman quarterback. I imagine Richt would have had roughly the same level of success had he stayed one more season. (His Miami Hurricanes are also 7-4.)

Of course, looking at it now, eight wins doesn’t feel that great, even though most fans expected it to happen. I think that’s because, in the offseason, we talk about wins and losses in the abstract. When we’re talking about how many games we think Georgia will win, we’re also implicitly talking about how many games it will lose. It’s just that we don’t focus on those losses when we’re pontificating about the future. Even though we roughly predicted the record, it still feels like a punch in the gut, because really all we were thinking about was the eight wins and not the four losses.

And all losses are not created equal. Looking back at how this season has played out, there is no doubt that the Vanderbilt loss is worse than the Florida loss. Florida is the SEC East champ and quite clearly a better team. Vanderbilt was lucky that Jim Chaney called a horrible play. Tennessee was lucky that Georgia’s secondary forgot how to defend for a split second.

Which is another problem with talking about how you think a season will play out. Now we aren’t just gauging which games we’ll win. We’re gauging which games we should’ve won. An 8-4 record may have looked like a strong one for this team before the season, but it doesn’t look as good when 10-2 was just a few plays away.

But games like Georgia Tech provide an opportunity for a twofer of sorts. Fans tend to give a lot more credit for wins over a rival, as well as a lot more criticism for a loss to one. That’s one reason Richt endeared himself to Georgia fans so quickly. He didn’t lose to Georgia Tech in his first seven times facing it, and he had a 13-2 career record over the Jackets at Georgia. Knowing that Richt was going to shut up the Tech fan in the cubicle next you come season’s end helped fans forgive a lot of his losses. Beating Tech provides a catharsis at the end of the season that helps erase some of the bad stuff that preceded it.

That’s what’s at stake for Smart this Saturday. Fans will either spend the offseason hollering about how he isn’t right for the job, or they’ll wait patiently for the rebuilding process to progress. Beating Tech certainly won’t guarantee Smart’s success in the future. But it’ll make me look back on this season a helluva lot more fondly than I would’ve at one point.

Wreck Tech, Kirb Stomp. For your sake and ours.

The Branded Butcher is Rebranding, Preserve Is Closing, and Cinnaholic Is Open