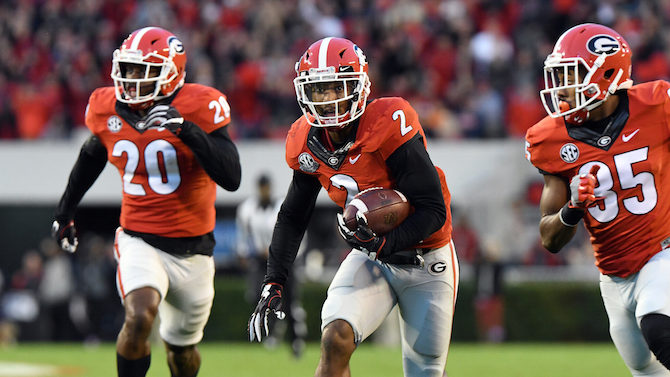 Georgia welcomed No. 9 Auburn to Sanford Stadium on Saturday and beat the Tigers 13-7 to give Kirby Smart a signature win in his first season and renew some confidence in the young coach, whose team struggled mightily in October. It was Georgia’s defense that won the game, and it gave us our first glimpse of how we can expect the team to play if Smart ever gets the program humming.

Georgia’s defense swarmed Auburn on runs. Without SEC-leading rusher Kamryn Pettway to grind out yards for them, the Tigers were anemic on the ground. Georgia allows 119 rushing yards per game, 20th nationally. Auburn barely fared better than that, gaining just 127 yards, 99 coming from Kerryon Johnson.

One reason Georgia was so successful versus the run on Saturday is because it could almost completely ignore the pass. Sean White, who was coming off a shoulder injury to his throwing arm, didn’t look close to 100 percent. He couldn’t get air under his passes or throw accurately, and those problems only got worse as the game wore on and he tired. White finished 5-for-20 for just 27 yards and an interception.

That interception was the play of the game, and probably of Georgia’s season so far. White threw a duck to a covered receiver, and Alabama grad transfer Maurice Smith simply stepped in front of it. Luckily for Georgia, Smith had a wall of Georgia players nearby to escort him into the end zone and give Georgia the only touchdown it would score—and the only touchdown it would need—in the game.

It was the best performance I’ve seen from the Georgia defenders in ages. They swarmed the ball like locusts and didn’t give Auburn any breathing room. Pass, run, it didn’t matter. Smart and defensive coordinator Mel Tucker had the defense ready for this game. As the players on this young Georgia unit get older, I expect more performances like this. We were promised Smart would Alabamify Georgia’s defense, and it appears he’s finally living up to his end of the bargain.

So everything is good in the world, right?

Wait, there is that little thing where last Tuesday we elected a racist, misogynistic, xenophobic, nationalist, anthropomorphic Troll doll to the highest office in the nation.

The election of Donald Trump has laid our emotions bare. Every morning since Wednesday, I’ve woken up with a pit in my stomach. I’m filled with overwhelming sadness for our country and overwhelming worry for its overlooked citizens, those who have much more to lose in a Trump presidency than I, a straight, white guy. I bet this experience isn’t all that different from your own.

Then there have been the few occasions since Tuesday night when I have felt some normalcy. I had a pleasant conversation with a receptionist at my doctor’s office. I listened to A Tribe Called Quest’s new album and lost myself in the beats and rhymes. I watched Georgia upset Auburn, and screamed my lungs out when Smith bobbed and weaved through Auburn’s defense to score the winning touchdown. It feels great to feel normal in times like these.

But those moments never last long. It was only fleeting after the Georgia win. The game ended, and the camera panned the crowd. With that, I remembered that the state of Georgia went for Trump, and the majority of the 90,000-plus mostly white fans at Sanford Stadium pulled the lever for a racist demagogue. At worst, they are bigots. At best, they are unconcerned with bigotry. Then I remembered that within a mile of the celebrating throng, and perhaps even within it, there are black, Muslim, Latinx, LGBTQ and female Georgia students worried about whether or not they’ll have a place in this new America that the throng chose. Then the normalcy is gone, and the worry resumes.

It’s difficult in these uncertain times, but we must take and cherish any moments of normalcy we come upon, because they remind us of what we stand to lose under Trump’s regime. Have a beer with a friend and don’t talk about politics. Read a good book. Watch Mo Smith’s pick-six on a loop for a while. Then remember the people who stand to lose the liberty to do those things if hate wins. Then get back to fighting for what’s right in your community, your country and the world.

Where to Buy or Eat Your Thanksgiving Dinner in Athens