Kirby Smart Should Run the Spread 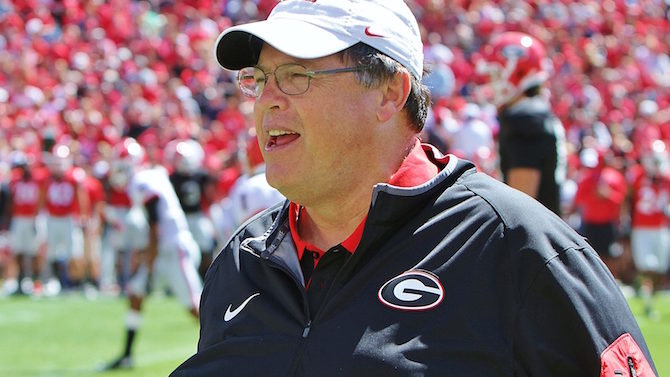 If you didn’t already know Georgia’s season is a lost cause, the loss on Saturday told you. The Bulldogs fell to the Florida Gators 24-10 at the “World’s Largest Outdoor Cocktail Party” and dropped to 4-4 this season. With just four games left, a bowl appearance this season is looking less and less likely, and as many as three more losses could be coming Georgia’s way.

The season was a lost cause from the first snap of spring practice, and it’s because of the offense Kirby Smart wants to run. He brought in offensive coordinator Jim Chaney to install a power run game. The problem is, the way the offense—more specifically the offensive line—he inherited is built, there was always very little chance that it would be effective this season, even with all the talented tailbacks at Georgia’s disposal.

Georgia’s offensive line is just too small right now. Mark Richt’s system used smaller lineman to pull and move around to break runners outside. Chaney wants his OL to bang and bully opponents to set up runs between the tackles, and to do that you need five big bodies. Unfortunately, Georgia has one of the smallest offensive lines in the SEC, bless their hearts.

On top of that, freshman quarterback Jacob Eason ran the spread in high school. Before he came to Athens in the spring, he’d never played a pro-style offense, and probably took very few snaps from under center. That’s a big learning curve, even for a quarterback as talented as him. If Smart wanted this offense to click more this season, he should’ve installed more spread packages to give both Eason and the offensive line some plays they’re comfortable with.

It’s understandable why he didn’t do that, however. Smart seems dedicated to the power run system, just like his former boss at Alabama, Nick Saban. And he, unlike many fans, understood that this was likely to be a lost season. Barring scandal, no coach is fired in their first season. So he’s using his honeymoon period to instill the principles of the offense he wants to run and drill them into his players’ heads so they’ll be prepared when Georgia is in a position to compete for an SEC title. The offensive line will get bigger through recruiting, and Eason will get more accustomed to this system with time and reps. So far everything makes sense, even if it makes for a season destined to end in Biloxi at the Advanced Auto Parts Truck Nuts Bowl.

But if Smart was hired to make Georgia into Alabama 2.0, why is he running an offense that will never beat Alabama?

Dating back to 2012, Alabama has lost to only five teams—Ole Miss, Ohio State, Oklahoma, Auburn and Texas A&M. All five of those teams run some form of the spread. The Bama defense is designed to pack the box and stop the run, first and foremost. The only way to beat the Tide over the past four years has been to spread it out and pass it around. If you run at Alabama, you’re asking for a loss. Does Smart want to be Saban or beat Saban?

Maybe he has some secret to beating the Alabama defense from his years spent coaching it. Maybe he thinks he can beat Saban at his own game. Maybe, since he was at Bama for so long, it’s the only offense he really knows.

I don’t like Chaney’s play-calling, so hopefully Smart will find a better coordinator in the next few seasons. But I really hope Smart will do an about face and commit to the spread. (Dabo Swinney switched to the spread after his first year at Clemson, and we’ve seen how that turned out, so, hey, it’s possible.) With the athletes in the state of Georgia, and the defenses in the rest of the conference, it would be a big success.

But, because of the dedication Smart has shown to this power run system, I think we’ll see drastic improvement in the offense next season. But, then, as long as Alabama is still Alabama, the best-case scenario is we’re fighting for second place every year. The worst-case scenario is… well, you’re watching it this season.