Georgia Receivers Have a Bad Case of Weiner Fingers 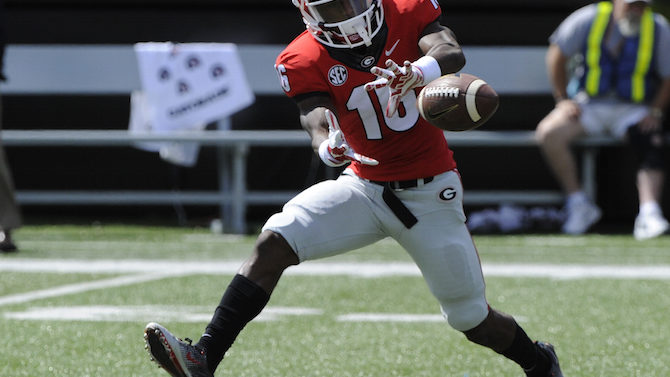 The second line in Ole Miss’s famous “Hotty Toddy” cheer is, “Who the hell are we?” That’s a good question Georgia can ask itself following a 45-14 beatdown by the Rebels last weekend.

UGA is still a team without any offensive identity to speak of. On top of that, the loss proved that this young team is far from ready for primetime, and more L’s could be on the way.

A lot of UGA’s problems were on full display in this shellacking—a continued lack of push from the offensive line that stalls the run game, and kickers who can’t make a field goal—but the crux of the loss boils down to one position: Their wide receivers caught passes, and ours didn’t. That alone was enough to get the Rebels out to a 31-0 halftime lead. It was a cakewalk from there.

It’s not like Georgia doesn’t have talent at receiver. The group is full of top recruits but, like in all the games this season, almost every receiver who hit the field suffered from a major case of weiner fingers—that’s a clinical term— with five drops in the first half alone.

One series in particular displayed the problem in all its ingloriousness. With the game at 17-0 in the second quarter, still within striking distance of turning the rout into a ballgame, Kirby Smart ran my favorite play so far in his tenure. On fourth-and-long from the UGA 40, the Dawgs ran a fake punt with punter Marshall Long hitting Sony Michel for a 29-yard pass. I wasn’t expecting it, you weren’t expecting it, and, most importantly, Ole Miss wasn’t expecting it. Smart sensed our back was against the wall and made a gutsy call. It was perfect.

Then the rest of the drive happened. With a chance to put some points on the board and get back into the game, UGA receivers dropped three consecutive perfect passes from Jacob Eason—one by Isaiah McKenzie which would’ve gone for a first down, and two by McKenzie and freshman Jayson Stanley that would’ve been touchdowns—to kill the drive. And it wasn’t a bobble here or there. It was poor technique each time. Instead of trying to catch the ball with their hands—you know, like how receivers catch the ball—McKenzie and Stanley tried to use their forearms to wrangle the ball under control, each time allowing it to slip through and hit the ground.

One drop like that would seem like a fluke. Wideouts are taught to catch with their hands from an early age. But three or more drops screams poor coaching to me. If the receivers continue to drop passes, their new coach James Coley is the first name I want looked at when the annual offseason staff shakeup comes.

To further the problem, the drops are definitely slowing the progression of Eason. The young QB looks like a star in the making—although his errant throw into double-coverage on the pick-six was cause for concern—but the drops and lack of production by receivers could destroy his confidence. He only had 137 yards on 16 of 36 passing, but those stats belie all the good throws he made. If he had some receivers with a pulse, he could be the nation’s freshman QB darling.

Next up, the Dawgs welcome to Athens a Tennessee team that’s flying high after storming back from a 21-point deficit to beat Florida for the first time in 11 years. With the win over the Gators, the Vols see a clear path to Atlanta, and the next step is bowling over us. The Dawgs have the talent to stop Tennessee’s progress in its tracks and put us back in the fight in the SEC East; the fact that Ole Miss is in the West will help when tallying up SEC losses at the end of the regular season. But if the receivers don’t get their act together, the Vols can sell out for the run and shut the offense down. That would likely spell another loss, an end to any SEC East title hopes, and a mediocre to bad first season under Smart.

Athens Power Rankings for the Week of Sept. 26