If Georgia Keeps Winning, Mark Richt Will Keep His Job 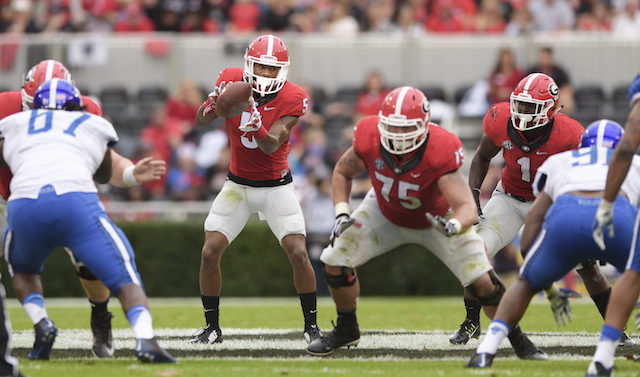 This week was a storm of turmoil and tumult for Georgia football, something this program has rarely seen under Mark Richt. For all the “Mark Richt has lost control of X” memes you (and I) have faved, the fact that Georgia was one of the most stable programs in the country was key to the joke. For while, it seemed parody became prophecy.

It started with Georgia’s embarrassing and season-crushing 27-3 loss to Florida. There were cries of “fire Mark Richt” far louder and more serious in tone than I’ve heard throughout his tenure. To add more turmoil, we heard rumors of a donnybrook between the coaches that led to the firing of defensive coordinator Jeremy Pruitt. But the donnybrook was downgraded to fisticuffs, then a kerfuffle, before it was eventually fashioned a heated argument—something expected from coaches of a team that has performed so far below expectations—and Richt tweeted his support of Pruitt.

Still, things… did not look good. But the Bulldogs ran into a once-again rainy Sanford Stadium Saturday and beat the Kentucky Wildcats 27-3 to stop the bleeding.

With so many things going wrong against Florida and with this season in general, the coaching staff decided to experiment a little. The most drastic move was a complete reshuffling of the offensive line, which featured some second-stringers replacing former starters, as well as a switch in position for others. The Bulldogs also used their quarterback carousel to gain a small advantage, naming Greyson Lambert and Brice Ramsey and Faton Bauta quarterback so the Wildcats wouldn’t know which to prepare for. Lambert got the start, and Ramsey received some snaps, as well, but neither was effective, throwing for a combined 90 yards.

Instead, Georgia was able to rely on its rushing attack for the first time without Nick Chubb. Sony Michel, broken hand and all, proved he’s capable of carrying the load for his offense, carrying the ball 24 times for 165 yards. Freshman wideout Terry Godwin scored UGA’s first touchdown in two games when he ran a muffed direct snap 28 yards to the end zone midway through the first quarter. Even Keith Marshall had a good day, taking 13 carries 60 yards, including one of the strongest stiff arms I’ve seen in years on a run that set up a touchdown.

Make no bones about it, though: We played well against a bad team. This is something we’ve seen before, i.e. a 52-20 win over a South Carolina team that lost to Kentucky and led Steve Spurrier to take his ball and go home less than halfway through the season. Yes, we scored 27 points, but look at Kentucky. It has the 78th-ranked defense in the country. It’s not exactly like we’re doing this against world-beaters. Winning’s better than losing (#analysis), and it will ease the pressure on Richt and the coaching staff and loosen up the the players, allowing them to play better as they move forward.

The next challenge for this Bulldog team as it fights for a respectable finish is a trip to the Plains for a contest against the Auburn Tigers. In all the preseason hype and hullabaloo, this game was supposed to be one of the marquee matchups on the SEC calendar, as both teams were picked by many to reach the SEC championship game. It was supposed to help decide the fate of the conference this season. Instead, Auburn suffers through quarterback problems of its own and already has four losses on the year, while Georgia… well, you know what happened to Georgia.

For Richt to keep his job—whether you want that or not—he has to keep winning. The problem this team has is there’s no way to shake off the stink from the three-loss October. When you look at the remainder of the schedule, you can’t see good wins, only bad losses. Georgia is expected to win out and should win out. However, win those and get a bowl win against a likely solid Big Ten team, and Richt will keep his post, although with other coaching changes attached. If that happens, Richt can weather the storm. As many problems as the Bulldogs have, I still think they’re better than Auburn, Georgia Southern and Georgia Tech.

But I can’t tell whether the storm has passed or we’re just sitting in the eye.

Updated With Statement: Bombs Away Books Has Closed