Everything That Could Go Wrong Against Alabama Did 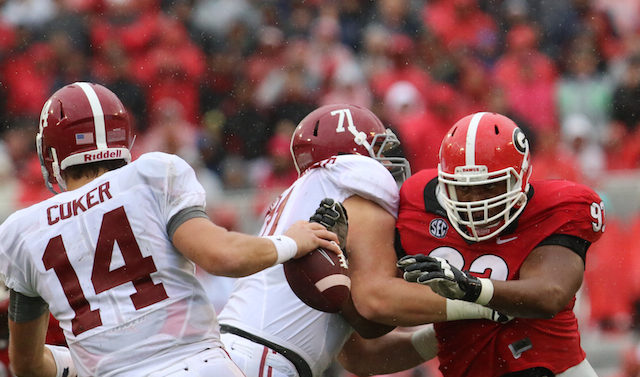 What was supposed to be the game that killed the Alabama dynasty blew up in Georgia’s face. With its back against the wall after a loss to Ole Miss a few weeks ago, Alabama rolled into rain-soaked Athens and demolished Georgia 38-10. And it wasn’t even that close. The Crimson Tide were completely dominant, scoring touchdowns on offense, defense and special teams.

The game looked pretty even early on. Georgia seemed to be in a better position to win. A turnover on Alabama’s first drive and some Crimson Tide penalties gave Georgia some momentum. If the Bulldogs had any shot at winning, they needed to win the turnover and penalty battles. Both those boxes were checked off early.

The turning point came in the second quarter with Georgia trailing 10-3. Punting from our own red zone, Georgia’s linemen seemed to do everything in their power to block no one and, unsurprisingly, the Crimson Tide bum-rushed punter Collin Barber, blocked the kick, scooped the ball and made the short jog in for six. The extra point made it 17-3 and effectively sucked all the energy out of Sanford Stadium.

Although there are multiple big plays like this one that can be circled as Georgia’s undoing, it was the play of the quarterbacks that did us in. Greyson Lambert reverted from NCAA record-breaker to failed Virginia quarterback. He was yanked at halftime in favor of Brice Ramsey, who threw a pick-six on his first pass of the game to put Alabama on top 31-3. That was the moment that made droves of Georgia fans make the sad walk in the rain out of Sanford, cursing both Nick Saban and Mark Richt. In total, Georgia quarterbacks threw three interceptions.

The quarterbacks weren’t helped by the conservative play-calling of Brian Schottenheimer, who still hasn’t figured out that offensive aggression is a necessity in college football—especially when you dig yourself a hole as big as Georgia’s.

Defensively, Georgia couldn’t push Alabama’s offensive line if they were driving bulldozers. This allowed Derrick Henry to run wild and quarterback Jacob Coker to take his time in the pocket. Coker was abysmal in the Crimson Tide’s loss to Ole Miss but stepped up in a major way against the Dawgs, passing for 190 yards and hitting open receivers whenever he saw fit. The Georgia defense made a mediocre quarterback look damn good.

Once again, Saban showed why he’s the best coach in America, while Richt did his usual Richt thing, woefully under-preparing his team for a huge game. Head coach, coordinators, players: There’s enough blame to toss around to everyone after this game.

It’s difficult to derive a positive from this game, but if there is one, it’s Nick Chubb extending his 100-yard rushing streak to 13 games, setting the Georgia record for consecutive 100-yard games. To derive a negative from that, he only got it on an 83-yard run when the loss was already well in hand.

From here on, things are more complicated for Georgia than we once thought. A week ago, pretty much anyone you talked to—Georgia fan or not—said the Dawgs could walk into the SEC Championship. That isn’t the case anymore. Florida is undefeated after stomping No. 3 Ole Miss in The Swamp. If we can lose to a Will Muschamp-coached Florida team, there’s almost no doubt we’ll have our hands full with Jim McElwain’s reinvigorated Gators. And already having an SEC loss as we head into the hairiest part of our SEC East schedule will do us no favors.

But the meeting with the Gators is still a ways down the road. Butch Jones and the Tennessee Volunteers are the more immediate concern. The Dawgs make the trip up to Knoxville this weekend.

This was supposed to be a corner-turning year for Tennessee, but things haven’t exactly gone as planned for the Vols. Losses to Oklahoma, Florida and Arkansas leaves Tennessee 2-3 and in desperate need of a win. And, although it won’t salvage their season, I don’t think there’s anything that would make Tennessee fans feel better than to beat a reeling Georgia and crush our hopes and dreams. I expect Neyland to be rocking with 100,000 fans foaming at the mouth to officially derail Georgia’s season. Misery loves company, after all.