Get on the Good Foot at the Augusta Museum of History 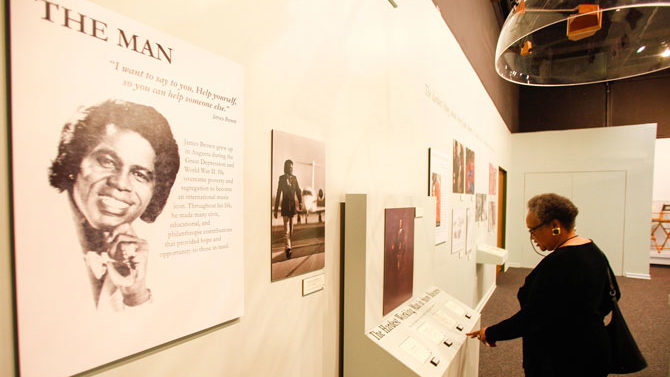 After visiting the Laurel & Hardy Museum (June 27), we continued our trip to Augusta to pay homage to James Brown, the immense rocking talent who became known as the “Godfather of Soul” and “The Hardest-Working Man in Show Business.”

In the 1950s, Brown seemed to spring almost fully formed out of nowhere, a dynamo of out-of-this-world soulful energy that would electrify the music world and spark the careers of dozens of musicians well into the next century. Mick Jagger, Michael Jackson and Prince borrowed (stole?) Brown’s soaring shriek and frenzied dance moves that seemed to be choreographed in time with 16th notes shooting out of a machine gun. Bootsy Collins, George Clinton and dozens of other artists working in genres anywhere near soul, funk, rap or hip hop give Brown lavish props for inspiring them.

After a poverty-stricken childhood in Georgia and South Carolina, Brown was sent to prison at 15, where he put together a gospel band called The Flames with his fellow inmates in Toccoa. He petitioned for early release at 19, regrouped with his band friends from prison and moved to Macon, home of Little Richard and something of a music center at that time. He was quickly signed to a record contract in 1956 at the age of 23, and his first single, “Please, Please, Please,” an R&B song that showcases his trademark shriek, became an instant hit and reached No. 6 on the Billboard R&B chart.

A string of hits—17 of which reached No. 1—followed as Brown quickly became an international star, going on to become one of the most celebrated names in 20th Century popular music. Along the way, he almost single-handedly invented funk, combining syncopated polyrhythms with an abrupt singing style, very different from the smoother Motown sounds that dominated black music at the time.

A highlight in Brown’s career came in Boston on Apr. 5, 1968, during a performance the night after Martin Luther King Jr.’s assassination, a concert that almost didn’t happen due to the widespread rioting in that city and across the country. Mayor Kevin White initially weighed the politically risky choice of canceling the concert, but was persuaded to let the show go on by a councilman who suggested televising it locally to try to keep fans off the streets. White even appeared onstage before the restive audience after Brown introduced him as “a swinging guy.” White went on to encourage the crowd to “make Dr. King’s dreams a reality in Boston.” A few months later, Brown released his anthem to black pride that seemed to be playing everywhere that summer: “Say It Loud—I’m Black and I’m Proud.”

How do you summarize such an immense, kinetic, game-changing career with a mostly static collection of artifacts at the Augusta Museum of History, next to an exhibit on golf?  They do their best, presenting the usual star paraphernalia: photos, elaborate spangled costumes (those capes!) and, of course, lots of music. There are great quotes about his art etched on the walls: “When I am onstage, I am trying to do one thing: Bring people joy,” or, “The James Brown sound I didn’t learn from nobody. It’s from me.” There are many references to the tremendous civic and charitable contributions he made to his hometown, where he lived until his death on Christmas Day 2006.

The most interesting moments are the grainy black-and-white performance videos from the ’60s, one of which shows an earnest Brown flawlessly demonstrating dance steps like the boogaloo, the mashed potato and the funky chicken. You can tell he’s in his element here, because he knows he’s the best dancer around. Oh, and the robot? You can thank Brown for that dance, too.

The good news is that Augusta is considering a much more ambitious homage to its most famous local hero. Commissioner Marion Williams said earlier this month that he wants to set aside property near the current museum to build an entire new building that will feature what promises to be an immersive James Brown experience. Either way, you’ll want to have a playlist to groove to for the two-hour trip home.